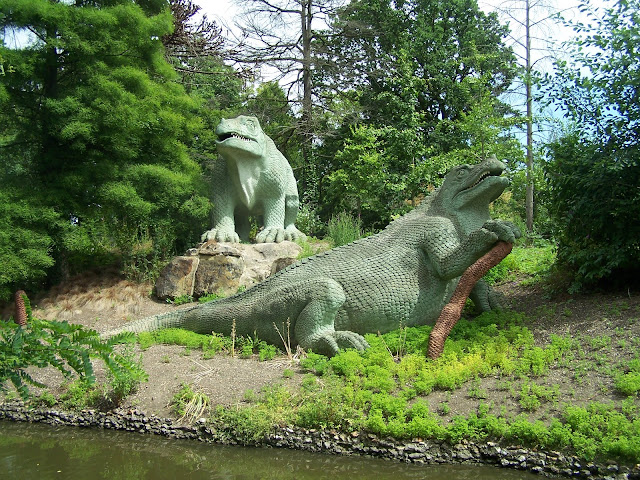 If paleo-geeks have a Mecca, surely it must be the old gardens of Crystal Palace in London. I’d been to the city before and completely missed out on visiting the concrete dinosaurs, designed and built by Benjamin Waterhouse Hawkins in 1852. These were the first life-sized dinosaurs the world had ever seen and helped triggered the first real dinosaur craze.
As I was about to fly home the next day, I was determined not to miss them a second time!
Driving back into the capital from the Isle of Wight, it took a few hours to find Crystal palace, but eventually find it we did. Ever since I was a kid I’d wanted to see these dinosaurs. I cannot think of a single dinosaur book I’ve ever read that didn’t have an image of one of those iconic monsters like the snarling, rhin 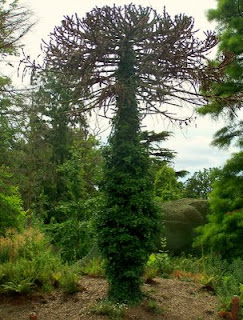 o-like Megalosaurus creeping up on the lounging, arm outstretched Iguanodon.
Hopping out of the car there was only one word for how I felt….giddy.
My girlfriend Jo walked patiently up the hill to the gardens with me and listened patiently as I babbled on and on about what we were about to see and why it was so important. I was in fact so busy talking to her about the display that I almost walked into the very closed and very chained gate with a very large sign on it announcing the Crystal Park Garden would be closed for this day- and this day only.
I think my girlfriend could tell by the ashen colour my face had turned I was more than a little unhappy. Solemnly, we turned and walked away… well I turned, she’d already taken several steps away, perhaps distancing herself from the upcoming explosion of expletives she was certain was about to erupt and possibly get me arrested for public obscenity.
Half way back to the car, dragging my feet like some child who wasn’t allowed to ride the roller coaster, I turned and simply said…‘Not a chance!’
Running around the fence enclosing the park, I eventually found a gardener and told him I worked at a Dinosaur Museum, had been keen to see the gardens my whole life and was flying home the next day, perhaps for good, so there was no way I could come back. The guy said he couldn’t help me but if I went back to the chained side gate, he’d see what he could do.
10 minutes later a Crystal Palace security guard, along with his ferocious guard dog, opened the gate and let us both in, telling us to meet him back at the entrance in a bout 40 minutes so he could let us out again.
Champions!
Jo and I wandered around the garden and it occurred to me very few people have likely ever had the run of the place by themselves the way we did that day.
What a joy. Crunching our way down the gravel dirt paths on a warm sunny day with the flowers blooming, catching the well sculpted statues of prehistoric creatures emerging out of the foliage, with no screaming parents and bored kids to ruin it for us….it was bliss.
Originally the man-made lake all the figures surround was tidal and the lowering and rising water levels would revel and hide the animals at various time of the day. Todays the ‘lake’ is just a really large pond with a series of small islands that contain most of the exhibits, and as the science of palaeontology grew, the highly inaccurate dinosaur models became more and more ridiculed and the park slowly fell into decline. This process wasn’t helped when the glass monolith of Crystal Palac 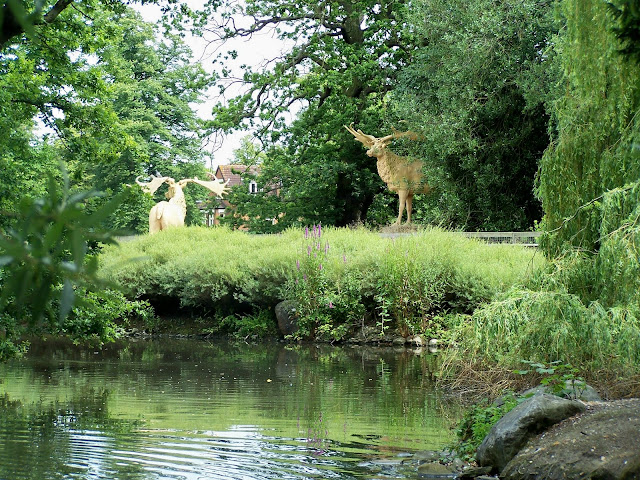 e itself burnt down in 1936.
In the 1950’s the models were cut out of the gardens plant life that had overgrown them, cleaned up, repaired and put back on display, though not in their original positions. This process hadn’t been the best (on one model they’d used plasticine for repairs) and the garden soon started to fall apart again.
In 2002 a complete restoration of the sight was finished with many of the prehistoric (looking) plants that had originally been planted alongside the models replaced, while many of the missing or destroyed figures were substituted with new ones. London had finally woken up to what treasures these models were and they were soon historically listed, protecting them for future generations.
I have to say the workers have done a fine job as the garden is fantastic, full of nooks and crannies where you can spot some prehistoric beastie hiding behind an arc 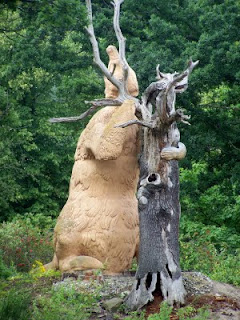 haic monkey puzzle tree or antediluvian fern. The display is so well planned that often the animals are visible from numerous locations even though they seem to be completely surrounded by vegetation.
To begin with, as you walk down the path you cross a family of Megalocerous, including a huge stag with antlers that had originally been the real fossils until someone broke in and stole them years ago.
Next, feeding under some trees or beside a creek are herds of Anoplotherium (which look a little like camels even though they were probably more hippo-like) and Palaeotherium (tapir-looking critters). Its many of these smaller figures that had been missing for many years before the 2002 restoration.
Further along you catch a glimpse of the monstrous Megatherium reaching into a tree to feed. This model is often seen throughout the p 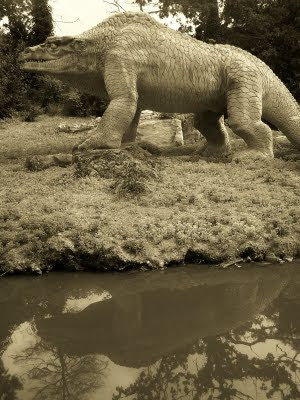 ark due to its large size and the fact that there are few trees surrounding it.
As you turn the next corner, you catch a brief glimpse of a wall of scaly skin, which soon blossoms into the complete Megalosaurus. Easily the most inaccurate of all the parks animals, I have to say I didn’t care one bit as this massive creature just looks terrific on its grassy hill. Looking like a cross between a crocodile, a bear and an elephant, the statue is enormous and stands magesticly across the pond.
The path cuts down along the ‘lake’ and you get your first look at what the Megalosaurus is stalking, the equally scaled Iguanodon and Hylaeosaurus that had, up until now, been hidden behind the bend in the creek and a number of strategically placed trees. All three dinosaurs are just so much bigger than any image credits them and I was happy to stand there all day and take them in. Unfortunately we were on a tight schedule and, with a deep, contented sigh we were soon back on the path.
Next the lake opens up and here is where you find the numerous aquatic creatures like ichthyosaurs, plesiosaurs, mosasaurs, labyrinthodonts, dicynodonts, teleosaurs and numerous pterodactyls.
Far too soon our time was up and we made our way back to the gate where the security guard was waiting. He took one look at my huge grin and asked ‘enjoy yourself did you?’
Yes…yes I did! 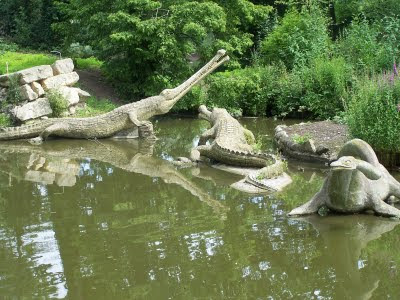