The National Showcaves Centre for Wales

Dan yr Ogof - but if you don’t speak traditional Welsh - the National Showcaves Centre for Wales is a 17-kilometre long cave system in south Wales, five miles north of Ystradgynlais. 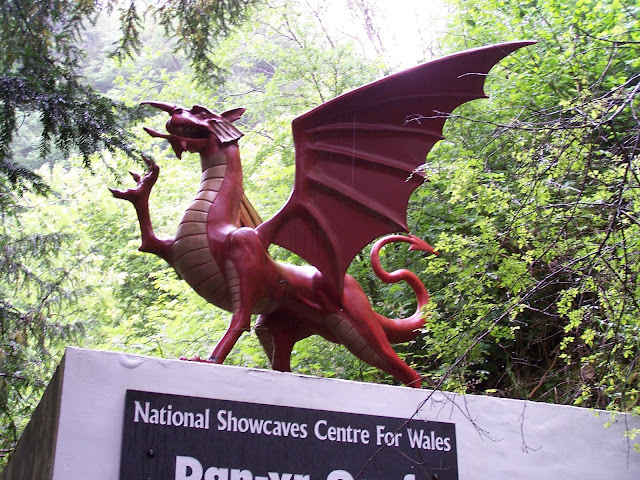 Now it rains a lot in Wales so the weather was no surprise, but I have to tell you it was really wet, I mean reallyyyy wet. Having caught the ferry from Ireland we drove through the stunning landscape of ‘Cymru’.
The character of the landscape was amazing and truly differs from the rest of the UK. Ireland has rolling green hills, numerous grass strewn rolling green hills. Scotland has mountains rubbed smooth by Ice Age glaciers long departed. The wild weather that torments Scotland continues to wear the landscape smooth by allowing little more than small bushes to grow. These hills are far more dramatic than the Irish ones, though neither hold a candle to Wales. Huge craggy mountains and rocks, more rocks than you can possibly imagine in a landscape that was still bizarrely green. Add to this the very low clouds rolling across the landscape and the only word I can think of that truly describes the Wales we were seeing was ‘dramatic’.
We drove through these hills and mountains, loving every minute of it, then approaching Ystradgynlais we came across a sign pointing out the National Showcaves Centre for Wales and Dinosaur Park….it was time for a break and a walk, you know, to stretch the old legs. 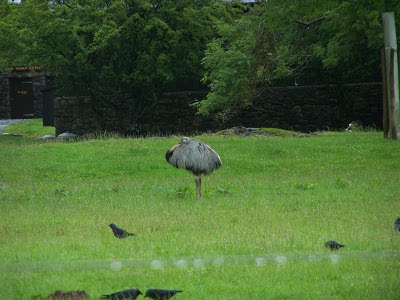 A good sign was the car park, which was large and well-manicured. Another sign was the large fenced garden you drive past to park had an Emu in it running about. It was a little weird seeing an Australian animal like this so far from home. Looking at the picture when researching this article though, I’m now pretty sure it wasn’t an Emu but a South American Rhea. 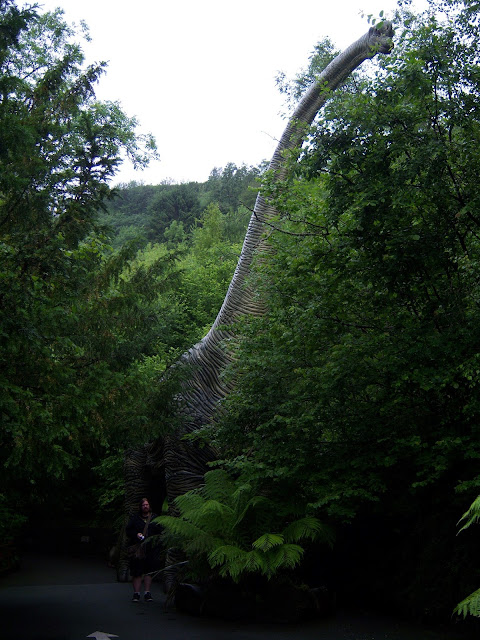 To get to the park’s entrance you have to walk under a sauropod, one of the largest outside exhibits I have ever seen. The thing was monstrous and very well made. On the other side of this meaty corridor was a large open courtyard with massive T-rex heads poking out of the bushes, along with another couple of large sauropods- Camarasaurus I’m thinking.

Purchasing our tickets we were also handed rain ponchos, a good thing because they were soon needed. This much rain keeps Wales very green, and the dinosaur park has been situated amongst a small forest, allowing the numerous dinosaurs to be hidden from each other…and there are numerous dinosaurs to hide, believe me. 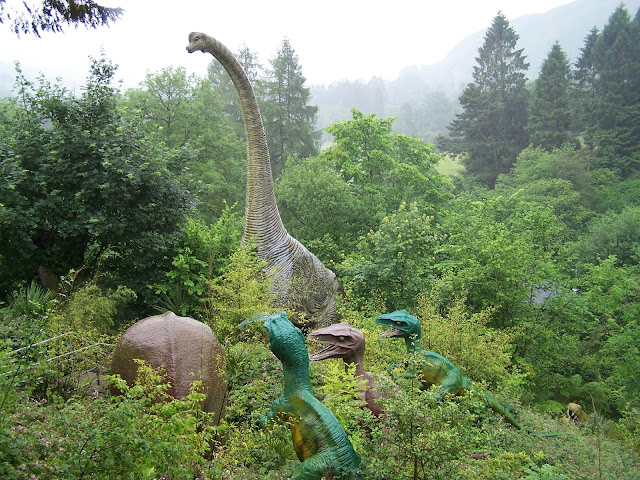 As we began wandering through the park the heavens opened and did not look like it would be letting up soon, so it was on with our ponchos and ahead we forged. It’s called a dinosaur park but really it’s full of all sorts of prehistoric creatures. 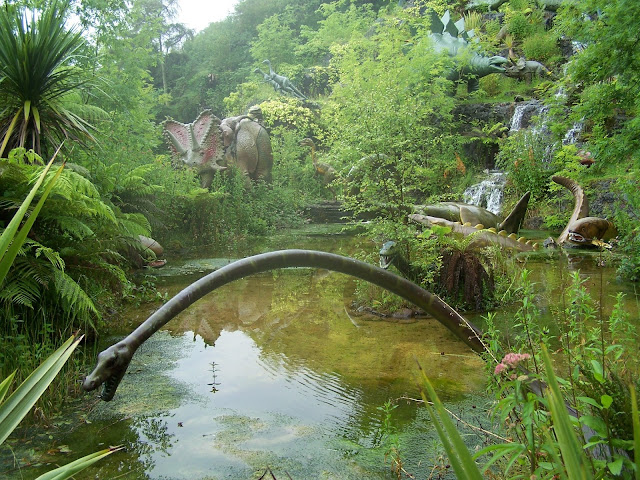 The pond is full of ancient crocs and fish, there were plesiosaurs and coelacanths escaping the jaws of mosasaurs and the armoured head of a Dunkleosteus. Flocks of pterosaurs fly between trees or roost along the cliff edges that border a raging waterfall populated by enormous amphibians. 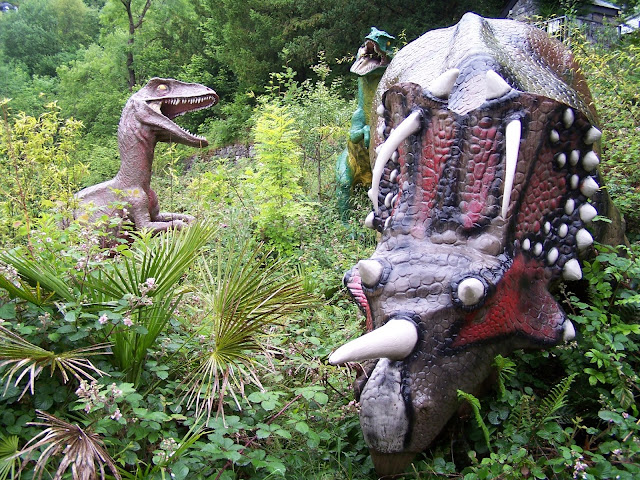 Between trees are dinosaur families, both adults and young, along with some truly enormous reconstructions. Raptors attack pods of nodosaurs, while herds of pachycephalosaurs head butt each other in displays of sexual prowess.
Amongst all these monsters are reconstructed villages, some stone age, some depicting scenes from paleo-Wales. 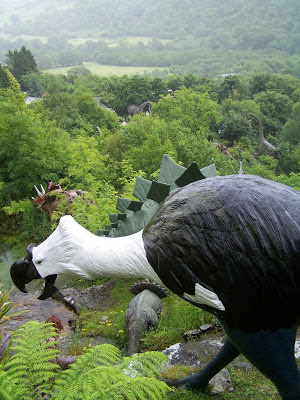 One of my favourite displays was of a large Terror Bird (Phorsuracos) hunting along the crest of one hill. It was looking at this specific animal that it finally hit me, I’d seen this creature before. Not a reconstruction, it was the pose that had been haunting my memory. Zdeněk Burian was a Czech painter that was one of the original paleo-artists. His prolific work included a nice Terror Bird painting, and the Phorusracos standing in front of me was identical to this painting(http://24.media.tumblr.com/tumblr_m7dhd0DHMh1rqeszyo1_1280.jpg) . With this thought in mind, as I looked about the dinosaur garden I began to recognise many older paintings coming to life about me…in statue form. 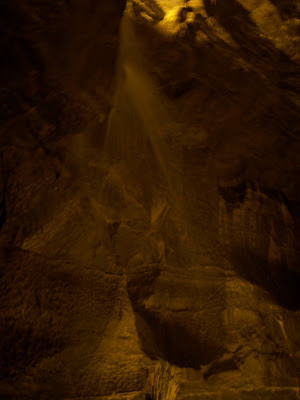 The path that winds past this killer bird leads to one of the more unusual things I have seen in my travels. The park has been built around a series of caves (supposedly some of the largest in Europe), and here you can enter one. This is possibly one of the most visitor friendly caves I have ever been too as the floor has been concreted smooth. There is also a small stairwell at the end of the caves path to reach a platform where you can view the main chamber-the stairwell of St. Pauls. This chamber has been formed by a small subterranean lake, fed by two waterfalls whose noise echoes throughout the cave. This area is occasionally hired out for functions and weddings, a handy use for a great looking space. 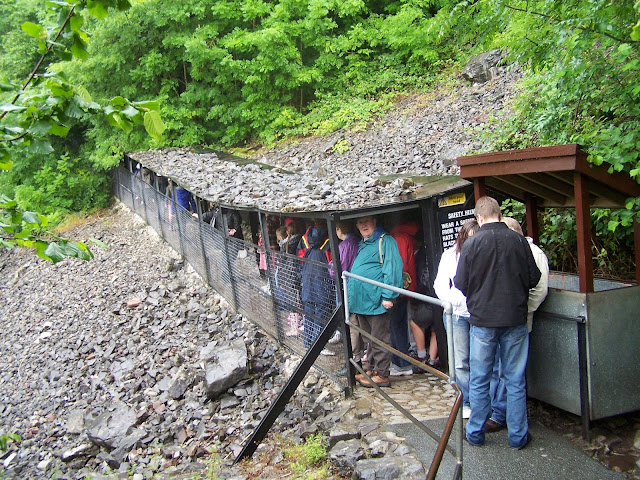 To originally get into this cave you have to cross a path under a strong looking steel cage. Wales is known for its shale, and here the constant rain seems to cause numerous rockslides. To keep people safe the park has built this cage across the gap so people can get past safely. When we arrived the scene caught us a little by surprise as there was about thirty people huddle under its armoured roof and we weren’t sure why. 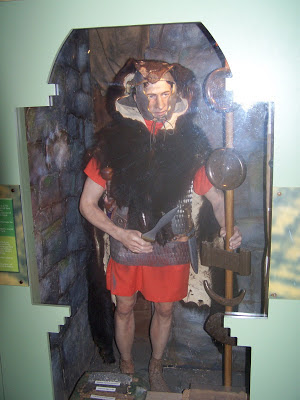 Heading out there’s a small museum on site with a few fossils and more reconstructions of life from the local region. Roman soldiers stand guard down one corridor, while another display shows how the caves were explored.
http://www.showcaves.co.uk/index.html

After all this dinosaur fun I wasn’t sure our day could get any better…I was wrong. One hour away we visited the 14th century St. Pauls, an amazing ruin and one of Wales’s great treasures. All in all I thoroughly loved Wales and am looking forward to returning one day. 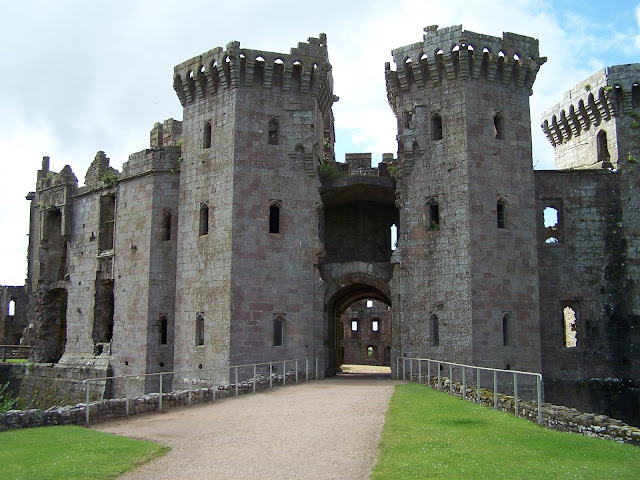