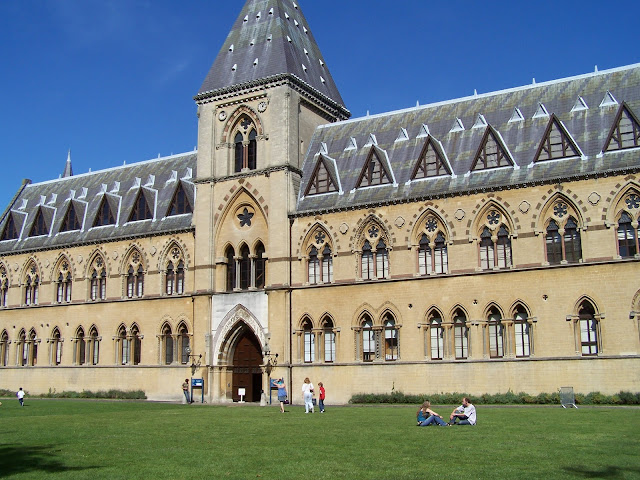 The gathered crowd of learned gentlemen murmured amongst themselves about the argument that had erupted on the auditorium floor. On one side stood Samuel Wilberforce, the Bishop of Oxford, one of England’s finest public speakers and a man who had recently barraged his parishioners with a tirade against Charles Darwin and his recently published book ‘On the Origin of Species’. About Wilberforce stood many of those whose opinions mirrored his own.
Opposite them were the less numerous but equally vocal defenders of Darwin, including the man who would one day be dubbed Darwin’s Bulldog for his tenacious advocacy of the theory of evolution, Thomas Huxley. 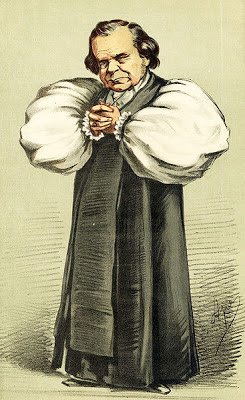 Wilberforce had arrived at the meeting of the British Association to bring the lords wrath into the debate and stood before the gathered crowd, his booming voice clear as a bell as he scorned ’s idea. Though his argument contained a decidedly religious stance, it also contained enough scientific information to prove he had been coached by one of Darwin’s more learned evolutionary adversaries, Sir Richard Owen.
The ‘Man of God’ could certainly talk and soon had many of those gathered in the auditorium eating out of his oratory hand. Like any professional entertainer, Wilberforce built a report with the audience with charm and wit, setting them up for the peak of his speech. After reminding everyone of the beauty of the Lords plan for the world and how dark the universe would seem without a guiding hand, he lordly turned on the science and pointed out how there was no evidence to support Darwin’s grand idea and that most scientists actually disagreed with the theory. 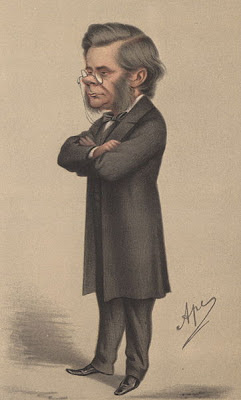 Wilberforce ended with a grand flourish, gesturing towards his opponent and asking if it was on Huxley’s grandmother or his grandfather’s side that he considered himself descended from a monkey?
The crowd erupted in laughter at the gibe and, as Wilberforce returned to his seat in good humour and gave the floor to Huxley, only those paying close attention noticed the naturalist was also smiling.
Once the room had quieted down Huxley, a peerless orator himself, nailed the Bishop to his chair with a steely glare and replied….
‘I would not be ashamed of having a monkey for an ancestor, but I would be ashamed to be connected to a man who uses his great gifts to obscure the truth!’

The story above is my dramatization of the famous evolution debate that occurred in the newly built Oxford University in the 1860’s, a building that now houses the collections of some of the world’s first palaeontologists. The Neo-Gothic building that held this debate is now a Grade-1 listed historical building in England and today houses the Oxford University’s Museum of Natural History. A competition had been held for the design of the building with a stipulation iron and glass must be incorporated into the building. It was one of the builders who pointed out it would be cheaper if Wrought iron was used instead of the stronger, more expensive cast iron. The softer Wrought iron was used to help create the intricate details on many of the museums features, while cast iron remained wherever strong support was needed to hold up that amazing, cathedral-like glass roof. 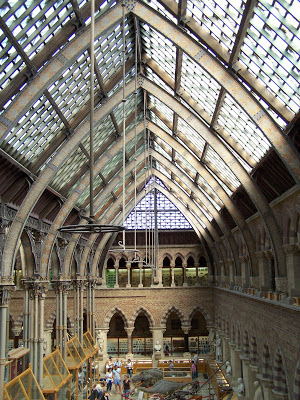 It really is one of the world’s best looking museums and once you visit you understand why it’s being protected. The problem with visiting, however, is you have to visit Oxford and believe me this is easier said then done. The town is a rabbit warren of tiny little streets and no, and I cannot repeat this strongly enough, NO parking. Either catch a bus after you have parked outside the city or be ready to drive around for a few hours until you find one of the very few street car parks (and I’ve just read they’re planning to cut down even more traffic in an effort to ‘pedestrianise’ the city, so things are likely to get even worse in the near future).
In truth this isn’t as bad as it sounds since, while you’re driving around looking for somewhere to park, you really do get a great look at the city, though if you have limited time it can be frustrating.
﻿﻿
Once you’ve parked and walked about the same distance as you would have if you’d walked to Oxford, you’ll easily find the museum. It looks like an old church on the outside and is one of the few buildings with a large lawn in front- containing dinosaur footprints running across it (from a Megalosaurus or possibly Cetios), which should help. As great as the building is on the outside, it’s inside that the museum that really blows you away. 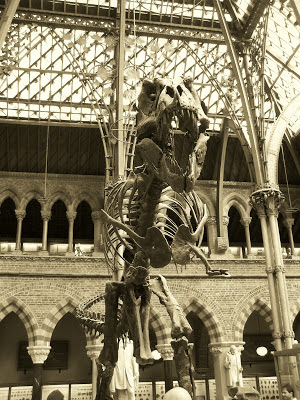 Harking from a time gone by, the majority of the museum’s exhibits are contained within the cathedral-like main court of the building. This all sits under an elaborate roof of Victorian ironwork and glass, supported by numerous intricately decorated columns in a series of high arches that create three adjacent aisles. Standing in the middle of all this is one of the best Tyrannosaurs I’ve ever seen, though whether it’s the ferocious pose or the fantastic backdrop that makes it so great still eludes me. One of the best images in the museum is, when you get to the right angle, seeing this T-rex in comparison to the tallest animals in the world today, the skeleton of a giraffe. It makes you realise there just is no comparison. 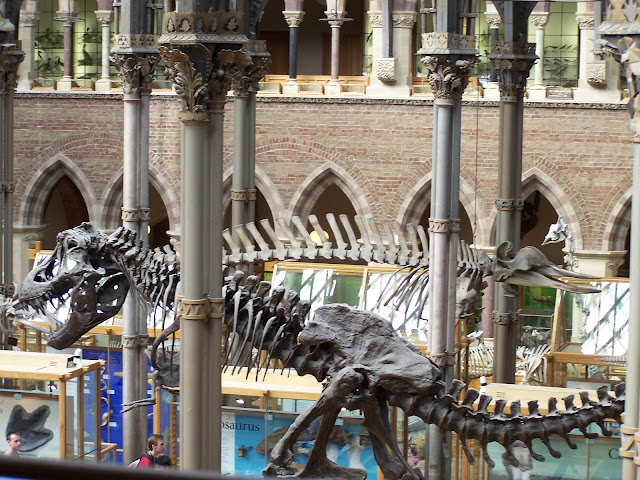 Each aisle houses a numbers of displays, like a row of mammal skeletons or dinosaur fossils, and (while I was there) a large number of props from the ‘Walking with Dinosaurs’ series. There is also an Iguanodon, standing in the old kangaroo-style pose, along with row upon row of modern animal skeletons. 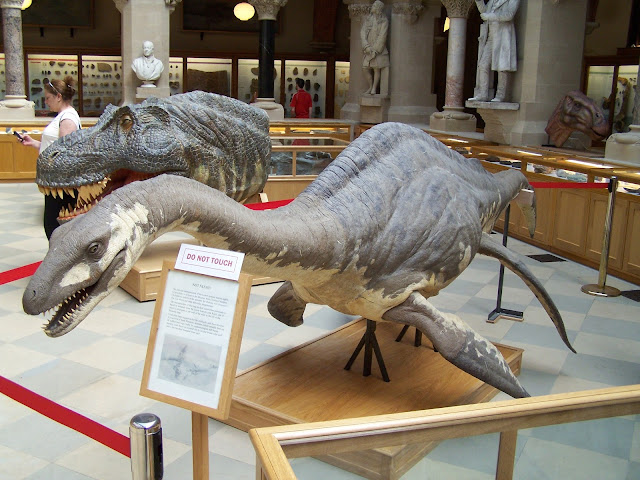 Along the walls, amongst the numerous statues of historical men of science, are glass displays and Victorian cabinets containing every type of fossils you can think of along with a living counterpart if available. Even though the museum is mostly contained in one large room, the display really does have everything you’d want from a modern natural history exhibit. 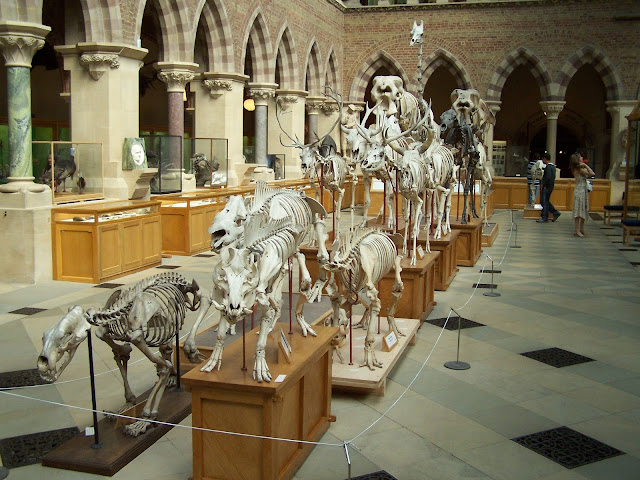 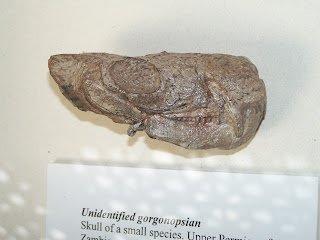 I’m hard pressed to think of any major prehistoric group that didn’t have some sort of presence at Oxford, I mean there was even a display with a number of Gorgonopsians, and I mean a number, not just the solitary skull most museums display. I should point out the entire prehistoric mammal collection is amazing, including a Cave Hyena which, for sometime, was an intricate part of early palaeontology. Kirkdale Cave is where many early fossils were unearthed in the UK, and these helped scientists at the time understand the very land about them had changed and began challenging the idea the bones found in the earth had been deposited by Noah’s flood. It was clear many of these fossils had come from an ancient predators den. 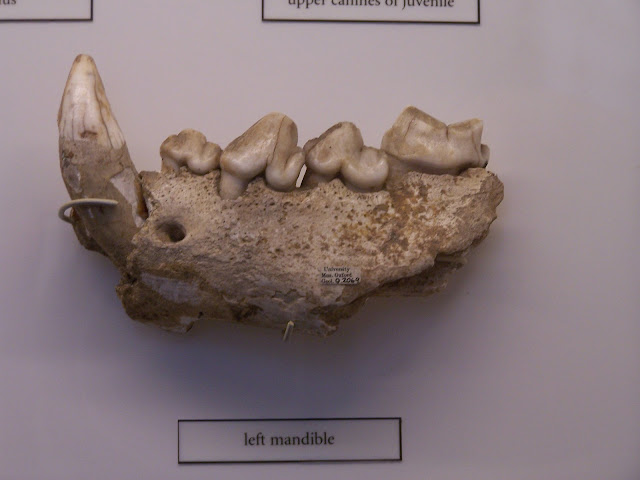 The main focus of Oxford is what it’s famous for, dinosaurs like Megalosaurus, along with the history of the fossils and the men who found them. It was William Buckland’s Megalosaurus (unearthed at nearby Stonesfield) that began the whole dinosaur obsession, a craze that seems to be running as strong today as it did back then. The museum also holds the ‘Red Lady of Paviland’, a Palaeolithic human skeleton that had been buried in red ochre and the first paleo-human fossil found anywhere in the world. Buckland had found the near complete remains in 1823 during a dig in Wales, and as you can tell by the name, he believed he’d found the remains of a woman. 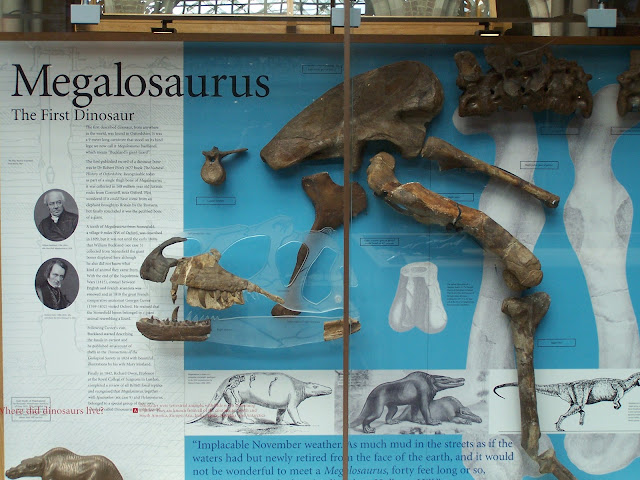 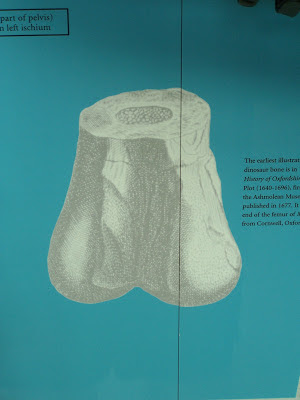 The museum has many of the early fossils from Megalosaurus on display. It was also home to the first ‘fossil’ ever described, the lower part of a theropod limb bone. At the time of its discovery dinosaurs simply weren’t known, so thanks to the size and shape of this fossil, the great ‘terrible-lizards’ received their first ever scientific name, Scrotum humanum, from Richard Brookes in 1763. Nearly a century earlier Oxford’s Robert Plot had recognised the fossil as the remains from a large thigh bone- though he believed it had come from one of the giants mentioned in the bible. There are some who believe the name Scrotum humanum is still valid and should replace ‘Dinosaur’ as the groups name…though how strenuously they believe this I will leave up to you. 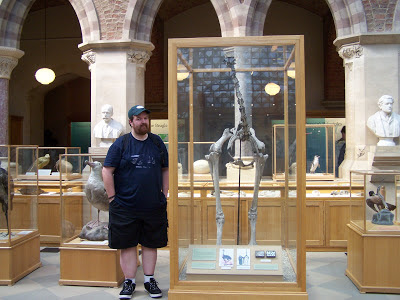 One of my favourite exhibits is a large glass cabinet containing a Moa Skeleton. This is the same fossil that sir Richard Owen was famously photographed standing next to all those years ago, and really brought home to me just exactly where it was I was standing. About you are fossils and specimens collected by some of the most famous figures in Natural History. Amongst the William Buckland fossils are specimens collected by Mary Anning, Elizabeth Philpot, Alfred Russel Wallace, Thomas Bell, William Burchell, and Charles Darwin. Where in the world would you see such a collection in one spot? 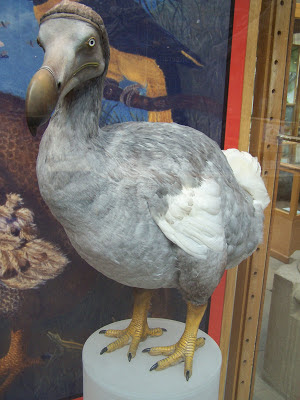 Another display the museum’s famous for is its Dodo. The most complete remains of a dodo are held here (a mummified foot and head)- though the Oxford collection once held the only stuffed and mounted Dodo known, that is until some moronic museum curator in the mid 18th century felt its was getting a little too ratty and ordered it thrown on the fire. This display stimulated Charles Dodgson, who lived near the museum as a child and spent many long days wandering its galleries being inspired by the bizarre and freakish creatures it contained. You may know Dodgson by his pen name, Lewis Carroll, the man who’d famously place the museum’s Dodo (who many authorities claimed was representing Carroll himself) in his book on the adventures of a little girl called Alice. 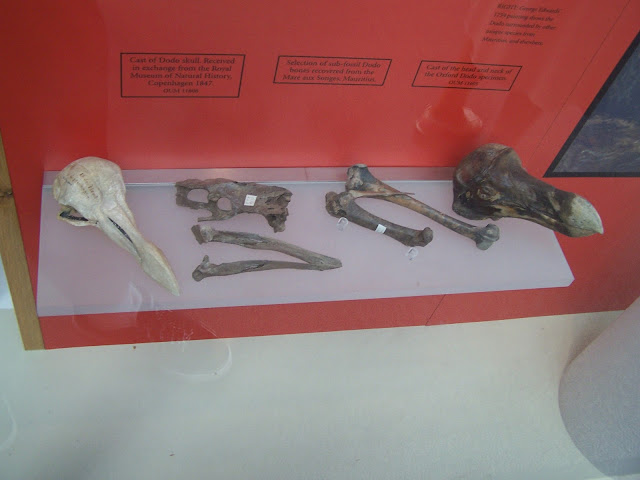 All in all the Oxford Natural History Museum is a must see if you’re anywhere near the area (it’s an hour or more drive out of London), if for nothing more than to see that fantastic building…and the Moa…and the Megalosaurus…and the gorgonopsids…and the Liopleurodon...and... 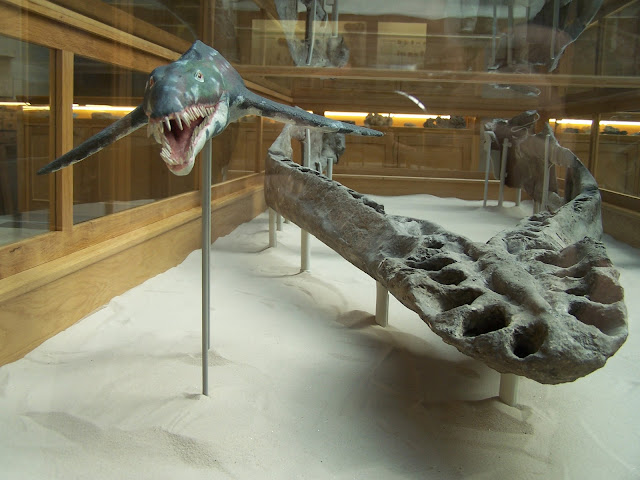 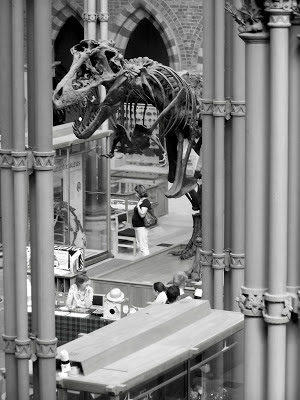 PLEASE NOTE: That window above the museum requires a lot of work and during 2013 the museum will be closed. Though disappointing, those working at the museum have done their best to temper this inconvenience by offering special behind-the-scene tours, giving visitors a rare opportunity to sneak-a-peak behind the looking glass (see what I did there, snuck in an Alice reference, I’m tricky that way).
Contact the Oxford University Museum of Natural History for more information on these tours.
http://www.oum.ox.ac.uk/

The Museum is also documenting the repairs on a blog, which makes interesting reading to anyone who’s ever wanted to know what goes on at a museum when the doors are closed.
http://darkenednotdormant.wordpress.com/

Lastly, anyone who follows my Facebook galleries or has ever received an email from me will know I am the self-proclaimed World Champion Aardvark Wrangler. Well the long hard journey to my world title began at the Oxford University Museum of Natural History 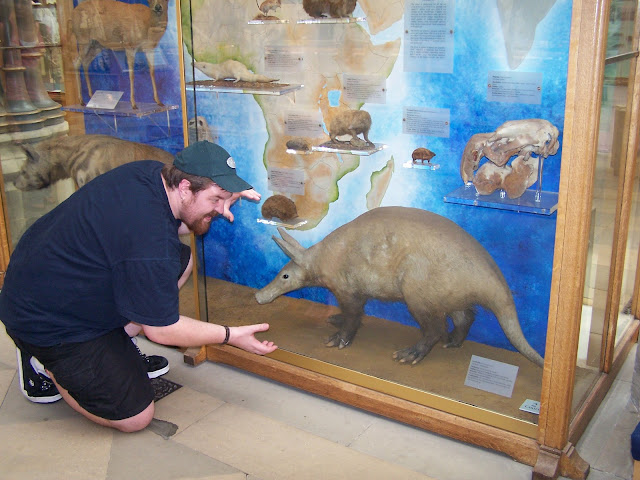