It was the perfect time of year to visit. 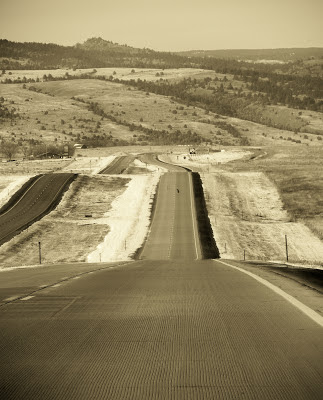 South Dakota in winter can be brutal place, but it would seem we were arriving between blizzards. Sweepers had clearly been busy as the roads leading up to the Black Hills were clear of snow and ice, the countryside, however, was covered in a layer of snow, making the scenery for an Australian from a sun-burnt country, spectacular. 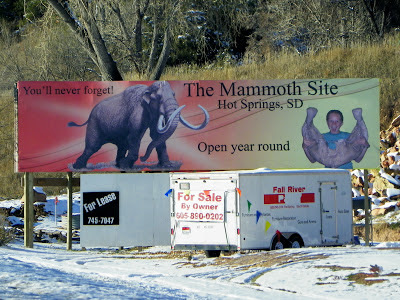 Expectations were high for this museum as scattered along the highway were large billboards calling us towards the Mammoth Site…apparently this would be a visit we’d ‘Never Forget’. Crowning one of the large hills the highway heading into Hot Springs passes is a large mammoth- or at least there should be by the time you read this. At the time of our visit this massive concrete beast was under construction and at that point only the lower half of the animals had been completed. It looked like it was going to be impressive, I hope someone can update us and let us know if it is. 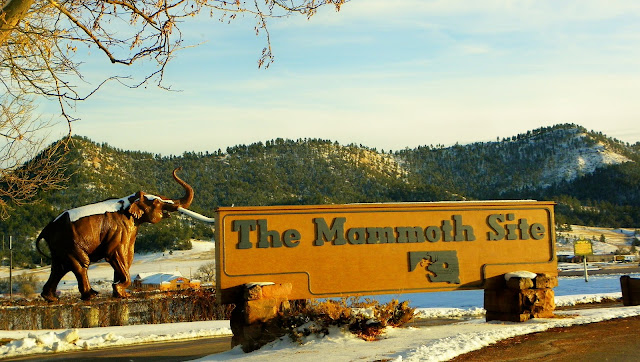 It was easy to see the museum from the highway. For starters it was on top of a hill, there was also a life-size Colombian Mammoth trumpeting at the sky at the bottom of the complex, and lastly (as it was winter) most of the trees in the area had lost their leaves and there was very little hiding the building from the road. 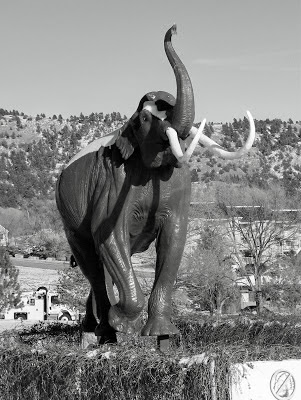 The car park was huge and totally empty, proving visiting South Dakota in winter has its advantages. Sure many, many tourist destinations are closed, but those that are open you general have the run of the place of. ‘The Mammoth Site’ would prove to be no different as I could have counted the number of visitors inside on one hand.
Clearly the museum is set up for large numbers of visitors as the foyer is large and the entrance into the exhibit is timed to regulate numbers and allow everyone to get a good look. Even empty we still had to wait, but that wasn’t really a problem as you don’t wait long and the foyer has one of the largest mammoth skeletons I’ve ever seen waiting with you (nickname Sinbad). There’s also a pretty good mural running along one wall depicting life in South Dakota during the Ice Age.

Once the main doors open it’s through a small corridor, past another heavy door and into the main exhibition hall. 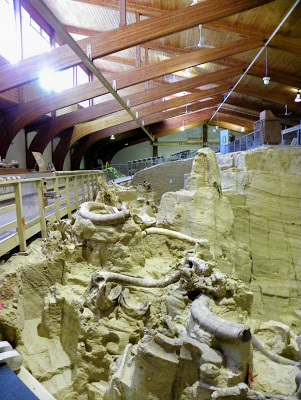 What lay on the other side is one of the great spectacles in palaeontology (a theme that seems to be a recurring one on this trip), a room large enough to fit some sports stadiums. To begin the roof over the enormous room is covered with intricate wooden beams, making the ceiling look something like a Viking longboat.
The mammoth site has a walkway running the outside circumference, and a visitor enters this at ground level and gets a good look down into the large pit cut into the hill the entire complex has been built into. Wherever you look in the pit there are bones, enormous bones. Some are solitary limbs, others skulls, some of these lay next to their bodies while others sit on top of columns of rock where decades of workers have dug away the sediment that once protected them.

Wandering through this amazing display I’m not ashamed to admit I had the hell scared out of me when someone working on the fossils moved from behind one large skull…I mean when you’re wandering through an empty museum display, you don’t expect someone to suddenly appear next to you from behind a creature that died thousands of years ago. 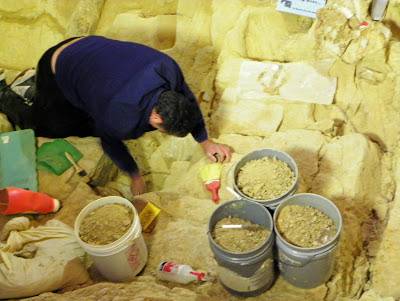 Now, some history…
In 1974 there were plans to build a new housing complex along one large hill in Hot Springs, and excavation was begun by grading parts of the hill to level it out. As the builders cut through the rise they noticed some soil was lighter than the rest, and inside this odd dirt were fragments of large bones.
A quick excavation revealed a few more bones, though from what was still a mystery until a large tooth was uncovered. This proved to be from a mammoth, and when further tests revealed there were a lot more bones in the ground, everyone involved realised they had stumbled onto something special. 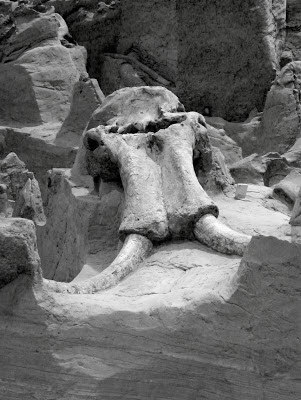 Everything that had been collected till that point was replaced in the ground and covered over. Winter was coming and there was a fear the bones in the ground would be destroyed by the cold, while the bones already removed may have been in danger of disintegrating. Placing them back in the ground would hopefully stabilise them. Everything could wait until warmer, longer days returned.
The next season work was begun on this strange soil and very quickly a large skull was found. ‘Mighty Manfred’ proved to be a large Columbian Mammoth, and with more fossils found it soon became obvious the planned for housing complex was going to be put on hold, permanently.
Money was gathered by the community, the land was purchased and, as more and more fossil were found, the idea of leaving them permanently in the ground and building a large complex around the site to not only protect, but showcase the site was begun. 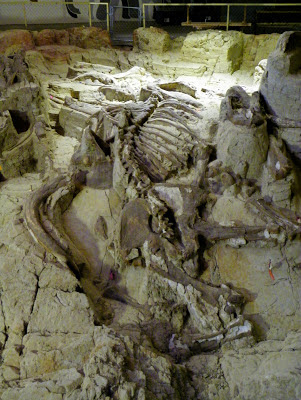 A drill hole was dropped 65ft into the hill, and the core revealed the lighter soil went down at least that far, maybe even further, fuelling speculation as to just what this site was. Four decades later its clear the area was once a sinkhole, where a subterranean cavern had formed and the roof collapsed. Filling with water and sediment, the pit became a natural trap where animals trying to get a drink often fell into the depression. The danger of this trap is best seen by one mammoth called Murray (Murray Antoinette to be precise as this mammoth is missing its head), whose body was found in the position it died. Its enormous front legs were pinned towards the lip of the hole and the rest of its body stretched out behind as though the struggling creature was trying to pull itself out. This situation for Murray was made worse thanks to the soil itself, renowned for becoming incredibly slippery when wet. 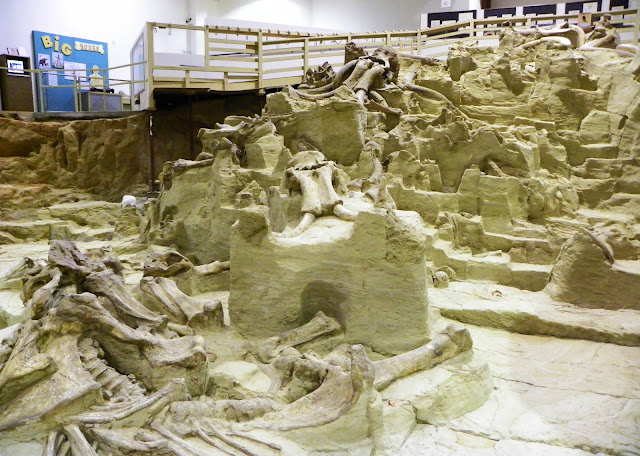 Most of the skeletons so far have been unearthed along the edges of the pit, strengthening the idea these were trapped animals trying to escape. Unusually most of the mammoths are missing their heads (like good old Murray) suggesting, even with their enormous tusks, the skulls were rather buoyant and had separated from the rest of the body after sometime and floated about the pond. One of these skulls (called ‘Beauty’ due to its complete nature) sits on a stone plinth, the rest of the soil around it dug away, greeting visitors as they first enter the excavation.
My favourite mammoth is also the most complete. Napoleon…Napoleon Bone-a-part if you please… was a large male that died lying on his back. Bone-a-part is so complete his rare hyoid bone (the one that helps us talk) is present, along with some gallstones.
In 1980 the importance of this find was recognised and the site was given the weight of governmental authority when it was established as a Registered National Natural Landmark by the US Department of the Interior.
A few years later a surprising find was brought out of the pit. After years of nothing but mammoths, the skull of an enormous Short-Faced Bear (Arctodus) must have been a welcome sight to those working the dig at the time. Since then other creatures, such as three Woolly Mammoths, have been found. All these finds can today be plotted through the dig thanks to the numerous little flags that have been placed wherever anything important was found. 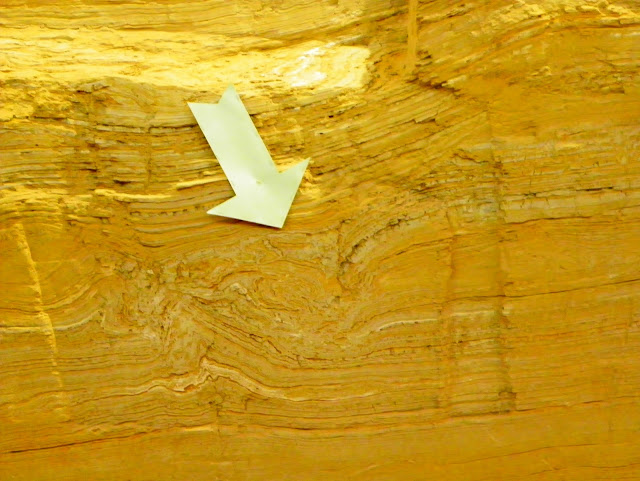 Going through the site another amazing feature easily seen (and highlighted by large arrows pointing directly to them) are a series of Bioturbations. These are cross sections of mammoth footprints made by an animal wandering through the pit, possibly by one of the creatures that eventually died there. The amazing thing about these 26,000 year old bioturbations is they show the true weight of these animals. The disturbances in the soil from the crushing effect of a ten tonne animal placing all its weight on the soft soil can be seen radiating down deep into the turf.
One feature of the excavation I really appreciate is at the rear of the room. From here there is part of the path that heads down into the pit, allowing a visitor to literally descend into the pit. From here the area comes alive and you can clearly see the various levels of the dig and the numerous skulls in-situ. 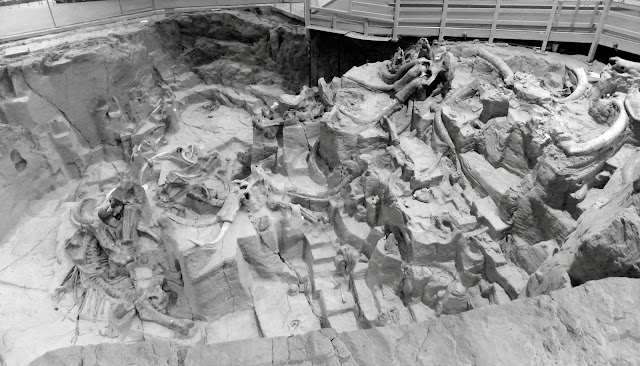 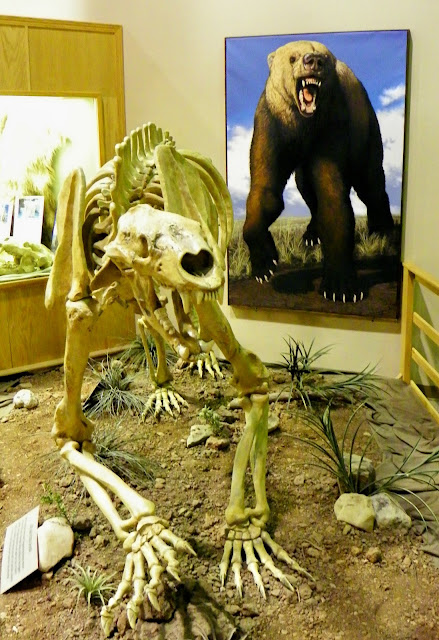 After a circumnavigation of the original site, visitors exit into something more akin to a traditional museum. The first thing you encounter here is a life-sized short faced bear. The thing is enormous. As you can see by the picture, I’m no small guy, but this predator was enormous. Living in the US for three years I always said the one creature I never wanted to meet was a Grizzly. They run faster than us, for longer, and if they cannot climb a tree, they’re big enough to knock it down with you in it. Short faced bears were larger, longer legged and apparently far more carnivorous.
Next is a life-like Colombian mammoth standing next to a similar sized skeleton, along with a display showing how Ice Age humans used mammoth bones to create living quarters. In a land with few trees, giant mammoth bones and tusks would have been one of the few resources these humans could use to build their homes.
There are numerous cabinets full of interesting fossils as well as a dwarf mammoth display and a real life exhibit showing how natives butchered a mammoth. 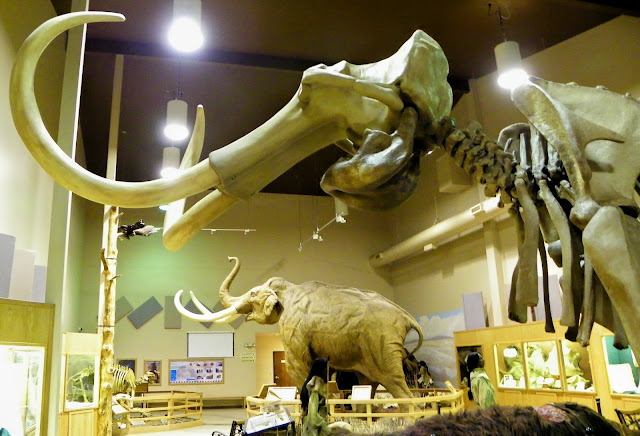 After all this, visitors exit the exhibition into one of the better gift shops I’ve seen at any museum in the States. Its full of wonderful mammothy goodies, mammothy t-shirts, mammothy hats, mammothy coffee cups….its the place to go for all your mammothy needs. 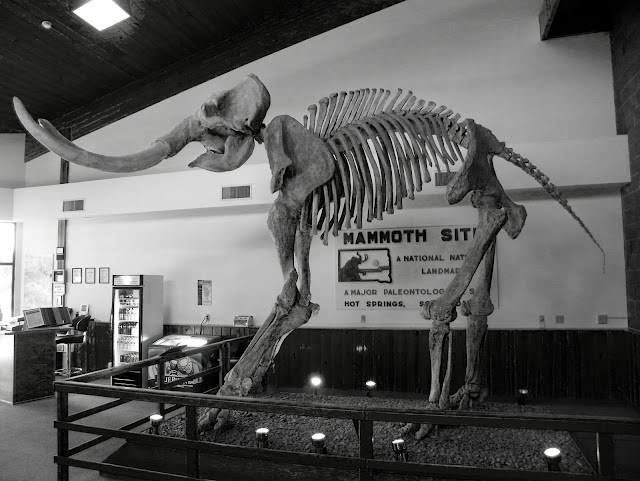 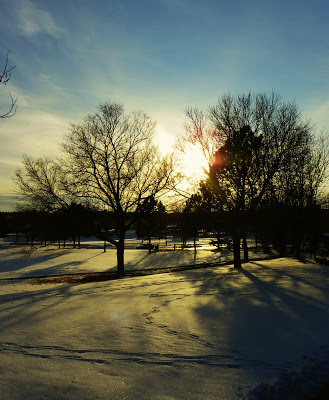 All in all, a great place to visit and, combined with the other stops along the Fossil Freeway (http://fossilfreeway.net/), a must drive for all paleo-fans.
If you are visiting The Mammoth Site, make sure you do a little research on its opening hours. Because of the weather and an obvious peak season during summer (when thousands of tourists head into the wilds of the Dakotas and Montana), the museums opening hours vary. It is open all year round, but some months it closes earlier than others.