Clash of the Mammoths - The Fossil Freeway, Part two.

Their names are Cope and Marsh, but more about them later... 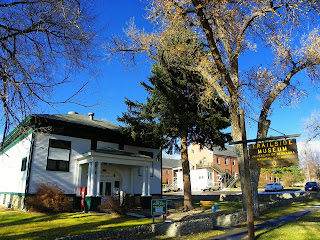 Running between Kimball in Nebraska and Rapid City, South Dakota, is highway 71- known today as the Fossil Freeway. From this main artery it’s possible to visit at least 20 fossil sites, both natural and institutional. Amongst these in Nebraska are the Huson-Meng Bison Bonebead, the Agate Fossil Beds National Monument, and the Trailside Museum.(http://fossilfreeway.net/)

Due to the nature of the winters in Nebraska the Trailside Museum is closed from November to March except, and this is the important bit, by appointment. As we were heading that way near the end of November, and on a Sunday to boot, I took the chance and emailed the museum to see if there was any possibility they’d be open. They weren’t, but the wonderful Pattie Norman agreed to open the museum for us, so we got to see one of palaeontology’s greatest spectacles- one very few have ever heard of.


I’d been unaware of the museums two Colombian Mammoths until I fortuitously caught NOVA’s ‘Mammoth Mysteries’ (http://www.pbs.org/wgbh/nova/nature/mammoth-mystery.html). In 1962 a surveyor was searching the grasslands of Nebraska for a new dam site when he noticed large bones sticking out of the earth. Contacting the University of Nebraska, a team was soon in the field digging out what they thought was a mammoth. When more dirt was removed the team realised it wasn’t one, but two mammoths they were working with, and something very unusual was going on. Both creatures were face to face, their enormous tusks wrapped around each others heads. Collected and wrapped in plaster, the specimens lay at the university, untouched, for nearly 40 years.

Finally the fossils were prepared, with forensic palaeontologists studying closely items like the tusks, which proved so well preserved under the microscope an individual days growth could be seen (you can still see clearly where these samples were taken from). Both mammoths were confirmed males, in their prime, and for elephants this can mean only one thing- Musth!


When male elephants grow sexually mature they go through what’s called Musth, a time when bull elephant testosterone goes through the roof and they become highly aggressive and fight other males (or giraffes, or rhinos, or trees…just about anything really that ticks them off while they’re in such a state), but rarely do they kill each other.


So what had gone so wrong with these two mammoths?


Unluckily for both, each had one broken and one full length tusk, meaning the two could get in close to each other, far closer than most mammoths normally could. Fighting, they jabbed and stabbed at each other, with one managing to strike the other in the eye with its broken tusk. At some point during the struggle both managed to encircle their good tusk behind the head of the other and they became interlocked. Exhausted, both fell (it’s been speculated spring rains had made the normally bone dry Nebraskan soils slippery), and it’s the way they fell that brought about their deaths. The fossils were found in such a way the weight of one elephant lay on the tusk of the other, so for one to get up it literally had to lift the other enormous bull with it at the same time- an impossibility even for these brawny beasts. Trapped, both animals lay facing each other until they died.


In a tongue-in-cheek nod to another pair of famous fossil duellists, the mammoths were nicknamed Cope and Marsh- the two palaeontologists from the famous ‘Bone Wars’ who between them collected and described almost every iconic American dinosaur. They had begun their careers as friends, and ended them as bitterest enemies.


Examination has revealed Marsh was slightly older, but Cope had larger tusks, and just like these mammoths, O.C. Marsh had been older, and the work E. D. Cope produced far more abundant. The comparison it must be said between the four is a fair one. 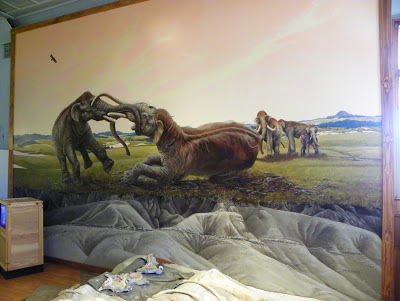 Such important specimens deserve a special home, and the University of Nebraska placed the mammoths at the Trailside Museum, a building that was once an army theatre. Here they dominate the display, with a large wooden walkway built around the beasts so visitors can see them from all angles. Behind them is a mural that was hauntingly familiar. The artist turned out to be Mark Marcuson, the very same artist who painted the life-sized mammoth mural at Morrill Hall at the University of Nebraska (as reviewed in my previous article, the parade of elephants http://bonerooms.blogspot.com.au/search?updated-min=2011-01-01T00:00:00-08:00&updated-max=2012-01-01T00:00:00-08:00&max-results=5) 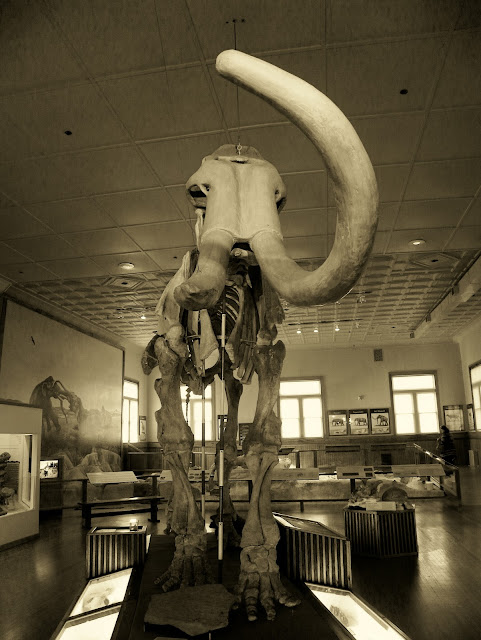 There’s also a mammoth standing at the front entrance which, I believe, is either a copy of Marsh (or Cope) and was possibly made from the unseen half of one mammoth. 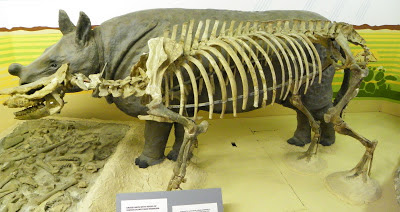 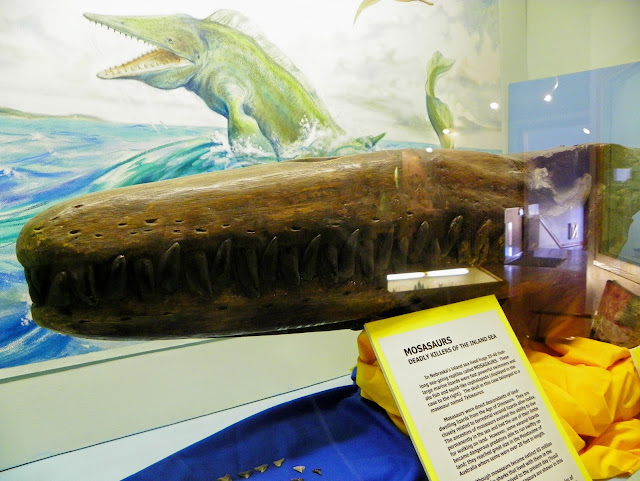 At one end there’s a set of stairs heading up to a small balcony, and bounding up there (yes, I do bound) to get a photo of the entire room I noticed a stuffed bison in the corner. Not so unusual for Nebraska I dare say, but this specific animal comes with a tag, noting it had been shot by Buffalo Bill himself. 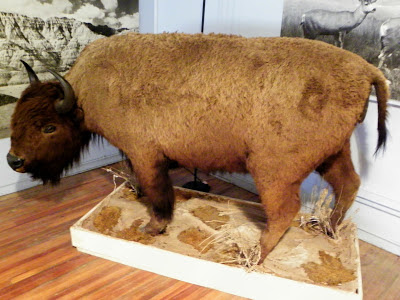 The museum isn’t the only interesting thing to see here either as it’s situated at Fort Robinson, famous as the launching point for the US cavalry’s final move on the Lakota and Ogallala tribes situated in the Dakotas. It was also here the famed Sioux warrior, Crazy Horse, surrendered and was killed- and today a plaque marks the spot of his death. Sadly I wasn’t aware of this at the time or else I’d have visited the spot…and this, after all, is what my blog is all about, making sure people don’t miss the important things when they’re visiting a museum. It was also a prisoner of war camp for German soldiers during the Second World War.

Surrounding the entire region, on the very edge of the grass prairies the fort is situated in, are rows of weathered, steep bluffs. These make this part of the Nebraskan Badlands look a little like a mini-monument valley. Pulling over to the side of the road and using the zoom on my camera, I noticed some odd looking animals grazing along the edge of the tree line at the base of those cliffs. 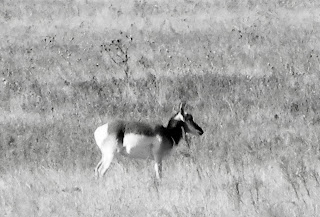 To my eternal pleasure they turned out to be something of a living fossil (or a better way of describing them, an Ice Age survivor), the Pronghorn Antelope. Considered the fastest animal in North America, the Pronghorn evolved when an entirely different type of cat prowled America’s endless prairies- the Miracinonyx or American cheetah. 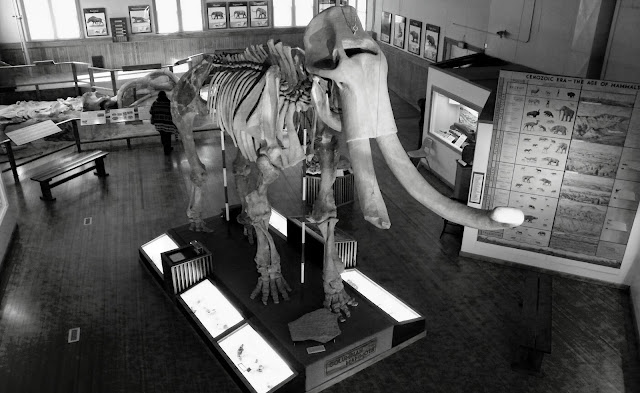 Though not the largest museum in the world, Nebraska’s Trailside Museum is most certainly worth the drive, as is the local scenery….and if you, go say hi to Pattie for me.