Dinosaur Isle- The Isle of Wight 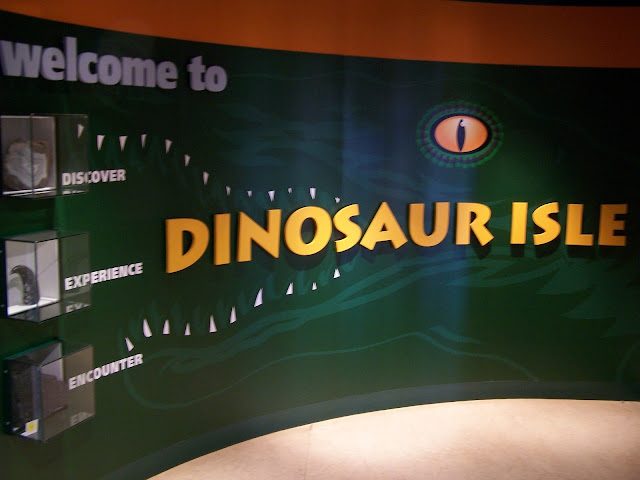 Getting to the is half the fun. 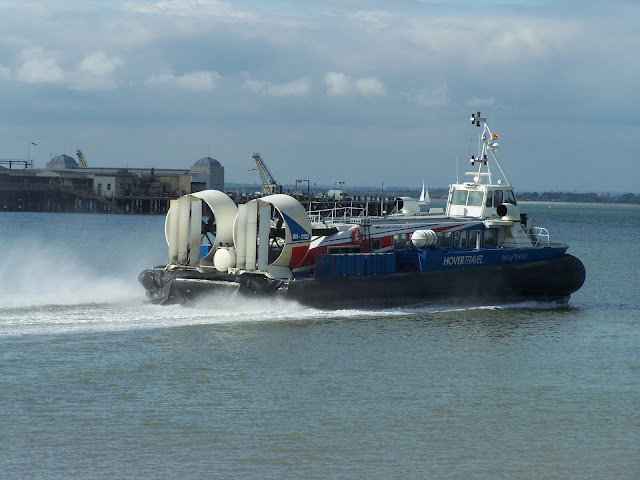 The island separated from the mainland about 7,000 years ago as the ice sheets covering Europe during the height of the Ice Age melted. This created a small strait, the Solent, which you can either cross on a ferry (with your car for a fee) or catch a hovercraft…A FRICKIN HOVERCRAFT! I have no idea what it is with the British and hovercrafts…and I don’t care. Bless their little empirical hearts for keeping a technology just because they really like it, not because it’s the most convenient. ﻿
﻿
We we’re in the middle of a three week circumnavigation of the UK, thus had a car and had to catch the ferry to the island, but grabbed the hovercraft for a day trip into Portsmouth to visit the historical harbour containing the HMS Victory, Mary Rose and the HMS Warrior. To walk onboard those old warships was a real delight, and even if you’re not a military history buff I assure you, you’re going to get something out of a visit to the harbour.
To see the very spot Nelson died on the Victory is great, but what I really found remarkable is if you visit the gift shop you can actually buy slivers of timber from the old warhorse for a very reasonable price. I assume the upkeep of the ship is constant and those replaced timbers would otherwise be disposed of.
The Mary Rose is still under repairs, having spent centuries at the bottom of the sea. The ship is held within a side building where its timbers are treated constantly. Her skeletal remains sit inside a single room with atmospheric lighting, which switches and fades, allowing the penetrating shafts of light to pierce the gloom and continual spray about the ship, making the view beyond eerie.
The hovercraft port is walking distance from these ships, but be aware this entire area could easily suck up a whole day. 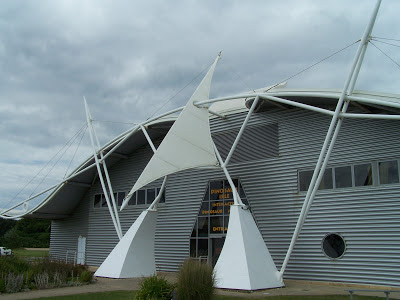 As the ‘isle’s’ dinosaur museum is outside the main city of Newport, the car turned out to be the perfect way to get there as we got to go for a lovely country drive (and got lost three or four lovely times), but there are buses that can get you to the museum if you’re on foot.
‘Dinosaur Isle’ is the first purpose built dinosaur museum in Europe and the buildings entrance has been designed to look like a Pterosaur, which it does. First opening its doors in 2001, when we visited the entry fee was around £5, and as we visited during the quiet season (read not school holidays) we pretty much had the run of the place.
The museum is just the latest installment in a long palaeontology history on the island. For centuries fossil shells and bones were discovered by gentlemen naturalists, and even today it’s a good idea to walk the island’s beaches after a storm as you never know what may have eroded out of the tall cliffs or washed up from the sea bed. Indeed some of the museums most famous fossils have been found by vacationers exploring the island.
The dinosaur fossils are found in a sequence of rock layers called ‘The Wealden Group’, which is composed of the sands and clays that once made up a giant flood plain and river delta that covered southern England during the Cretaceous. Later the region resembled the Florida Everglades, with swamps full of all the animals you’d expect to find there; turtles, mammals and crocodiles. 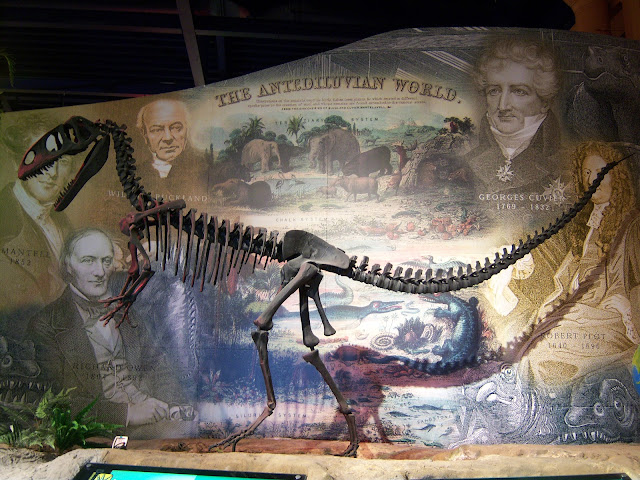 Entering under the head of the pterosaur, the first half of the building is mostly small marine and locally unearthed fossils. The first bend in this hallway reveals a nice life-size ichthyosaur diorama hunting down a squadron of letter ‘G’ shaped ammonites called Ancyloceras gigas if my memory serves me correctly. This serpentine corridor also passes numerous mammal fossils (including a rather nice hominid skull/head display) as the sea just off the Island was once part of a wide savannah called Doggerland. This explains why fishing nets continue to drag fossils from bison and mammoths out of the Atlantic between England and northern Europe. 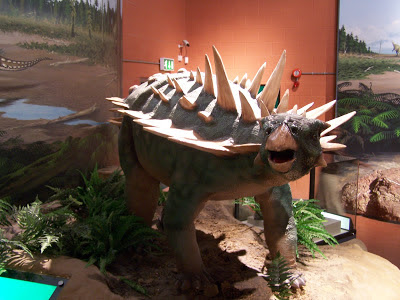 This tunnel-like display eventually deposits you in the museums main hall. The island has proven to be something of a Cretaceous gold mine over the years as it was once part of a Mesozoic river valley system, explaining why such a small region has produced so many fossils. Amongst the dinosaur species (of varying completeness) found locally were a number of iguanodons, a Hypsilophodon, an ankylosaur (called Polacanthus), a brachiosaur (Angloposeidon), and four theropods, Baryonyx, Neovenator, a possible dromeosaur called Yaverlandia and one of the earliest tyrannosaurids known, Eotyrannus. This last discovery alone makes the Isle of Wight important as Eotyrannus places the tyrannosaurs in Europe, greatly expanding their previous territory of Asia and North America. 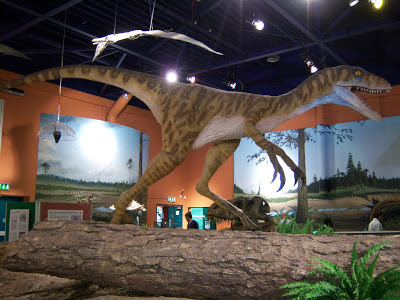 There are life-like models of most of these dinosaurs and a flock of pterosaurs hanging above your head from the roof. Behind many exhibits are also large images from famed paleo-artist, John Sibbick. One whole side of the hall contains a workshop where you can watch new fossils being prepared and preserved. At this time the museum contains some 30,000 specimens, most of which have been unearthed locally. 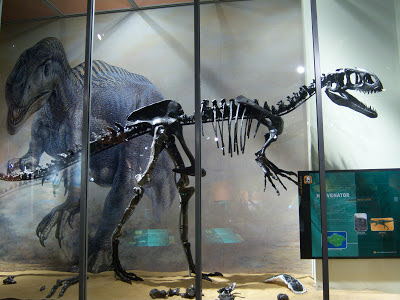 I got chatting to one of the preparators from this room (who turned out to be Steve Hutt, curator of the museum), and he explained the unexpected fact the National Dinosaur Museum’s (where I’ve worked on and off for over a decade) megalosaurid, Eustreptospondylus, was originally from the old Isle of Wight collection.

Outside the workshop are a number of hands-on-activities to keep the kids amused (ok, yes I was amused too) and best of all, friendly, accessible staff who proved more than happy to chat to a paleo-geek as myself.
After a few hours we left the museum and found ourselves pleasantly surrounded by a number of far more recent dinosaurs. While we’d been inside the large car park had been invaded by an Austen automobile club. That’s the quirky thing about the UK, wherever you go, people are proud of their history and privately do a lot to help protect their past.  Here was a car club, enjoying a shared holiday on the Isle of Wight, displaying their restored vehicles in the car park where they’d simply stopped to get a bite to eat.

It just goes to show you never know what you’re going to see when you visit this mysterious dinosaur island in the English Channel. 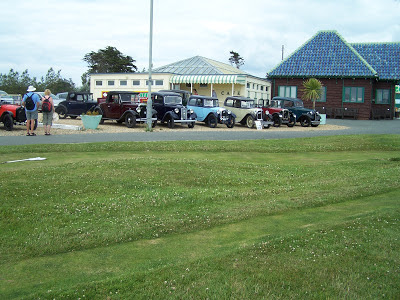