A parade of elephants (the Fossil Freeway -pt1) 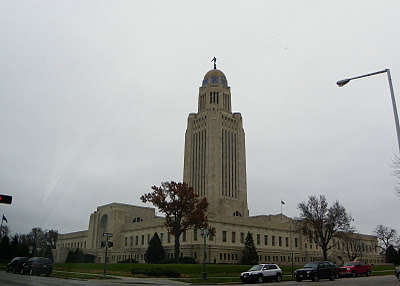 When you think of natural history and dinosaur museums, Nebraska is likely one of those places that doesn’t immediately spring to mind. Surrounded as it is by some of the richest fossil bearing lands on the planet (South Dakota, Montana, Wyoming, Colorado and Kansas for example), it’s easy to see how Nebraska has, if not been overlooked in paleo-circles, at least overshadowed. The tragedy is, if the state was located in any other country it would be considered a national treasure as boy, does it have some great stuff.
Flying into Kansas, we were headed for the Black Hills in South Dakota and the shortest route would have been directly north through Nebraska to either Sioux City or Sioux Falls, and along this path is the university town of Lincoln. We, however, chose to visit Lincoln then drive west towards Wyoming on interstate 80. The 80 was built along the former Great Platte River Road, itself the convergence point for many of the most famous old west migration paths like the Oregon, Mormon and California Trails- as well as a primary Pony Express route- so it’s a journey steeped in history. Passing Ogallala, we intend to take a right and head north to the Black Hills along what’s being called the Fossil Freeway. Between Interstate 80 and 90 (in South Dakota) there’s a windy path you can follow with a number of fossil sites, museums and tourist stops along the way (basically follow Highway 71, 28, then back onto 71)…and we’ll be visiting some of these in later posts.

With Nebraska’s state government and the University of Nebraska located in Lincoln you’d expect a few local museums, but the University of Nebraska State Museum was a real eye opener.  Founded in 1871 and located today within Morrill Hall on campus grounds, along with a decent planetarium (WARNING- the planetarium, and I’m not sure if this goes for the entire museum, is closed during the University football teams home games, so keep that in mind when planning a visit) and the usual zoological galleries with mounted US animals within their natural environments, for a paleo-fan the reason for visiting the museum is the Elephant Hall.

From the museums service desk you catch a glimpse of what this hall has to offer, but once you pass through the arched entry (it being far too large and grand to be called a simple doorway), you enter a true gem. Long and corridor-like, the vaulted, maybe 50ft ceiling should dwarf the creatures on display, and perhaps if the room only had two or three specimens this would be the case, but lining both sides of this spectacular hall are two lines of elephant skeletons covering the majority of pachyderm evolution.

Amongst the recessed alcoves containing mastodons, platybelodons, stegomastodons and gomphotheres is one of the world’s largest mammoth skeletons. The beast is huge, and though rumours are there's a new, even larger mammoth about to go on display somewhere else, for now this guy is the biggest. In comparison, standing next to the 14ft bull Imperial mammoth is a tapir-sized Dwarf mammoth (pictured above). The difference between the two is startling, I mean the dwarf would be tiny for a baby, but this specimen was fully grown and is about the size of a single foot of the behemoth towering over it. 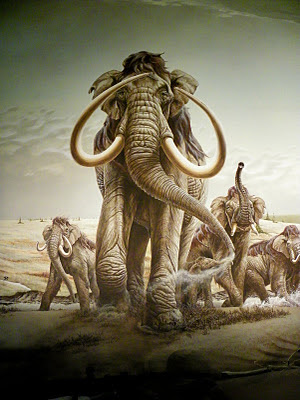 The hall also contains a display of modern elephants, but these are almost invisible thanks to the life-size mural covering the far wall of the hall that continually draws your gaze away. Painted by local artist, Mark Marcuson, this mural depicts a herd of Imperial mammoths (in the process of shredding their winter coats) crossing the Platte river, and is one of the best of its kind I have ever seen. I could have spent all my time in this hall, changing angles and humming the ‘baby elephant walk’ tune from that John Wayne movie, to the annoyance of all I’m sure, but there was more to see. 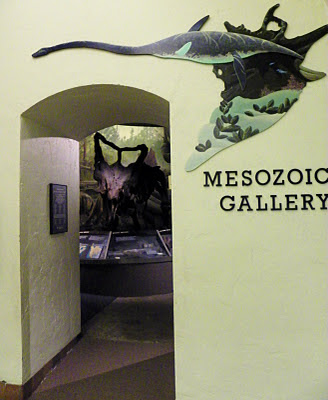 In the main corridor I spotted something that would become more common as we passed through this part of the US, a sign pointing downstairs to the Hall of Nebraskan wildlife and the buildings tornado shelter. Its weird how something so simple can make you feel like an alien in a very strange land- especially one of such extremes. 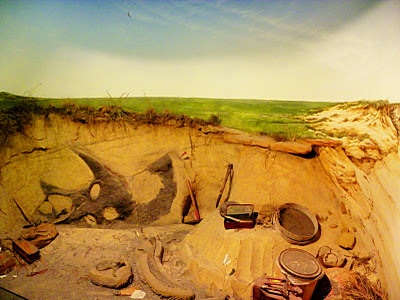 Through yet another arch you can see a large frill, and next thing you knew you’re standing before a very impressive Chasmosaurus. Marcuson is a talented guy and proves it once again here with his Cretaceous mural behind the ceratopsian. The other wall of this small room recreates a section of the Great Plains stretching far off to the horizon, with a Triceratops skull (I think) weathering out of an overhang. The display has been created as though a paleo-team has just taken a break for tea and biscuits (that’s what Americans like isn’t it?) and they’ll be back shortly to complete their excavations. 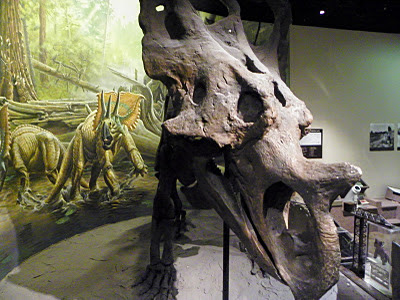 Though there technically isn’t a lot here, you’ll find yourself none-too concerned as the dynamic chasmosaur; his frill poised at an angle as though challenging you, the visitor to his domain, looks magnificent in front of its mural. Another thing I really liked was the museums lighting here. Too many institutions throw strong light at their displays, often blinding their visitors (and making it near impossible to get a decent picture), and so much light often gives the sense of sanitation- like a hospital. The warm, mood lighting in these displays I found was just right. Enough to illuminate the specimen and get about safely, but not too much that you felt on display yourself. 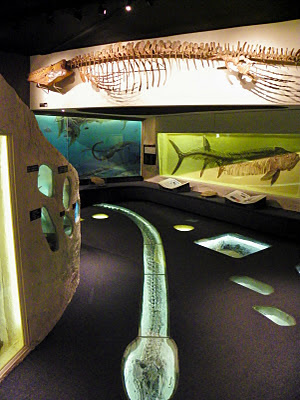 Around the corner visitors enter the Niobrara Sea. With limited room the curators have been clever and placed many of their fossils in the floor under durable Plexiglas. The largest of these is the 20ft long, snake-like head and neck of the plesiosaur, Thalassomedon, whose 62 depressed, illuminated vertebra you walk along as you move further into the room. Along the wall above Thalassomedon is a 30ft mosasaur called Tylosaurus, unearthed by Charles F. Sternberg, which dwarfs the equally impressive fish, Xiphactinus. I really like the way all these fossils are displayed, especially the ones underfoot and the others that have been pushed into the wall, making the place feel hand crafted and a little like Luke Skywalkers home on Tatooine. 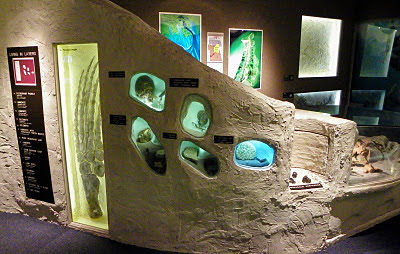 Another impressive item in this room is a mosasaur skull belonging too M. missouriensis, which possesses the teeth marks from the mosasaur that killed it. From here you exit the room and pass though a display of early Palaeozoic life, like the Cambrian and Ediacaran, before emerging once more in the main corridor- and probably means I travelled through these galleries the wrong way.
The rest of this floor has smaller, less spectacular fossil displays, with two rooms containing local fossils. The first has a large paleo-camel (Titanotylopus or
Camelops I believe) and a number of marine fossils like ichthyosaurs, crocodiles and turtles. 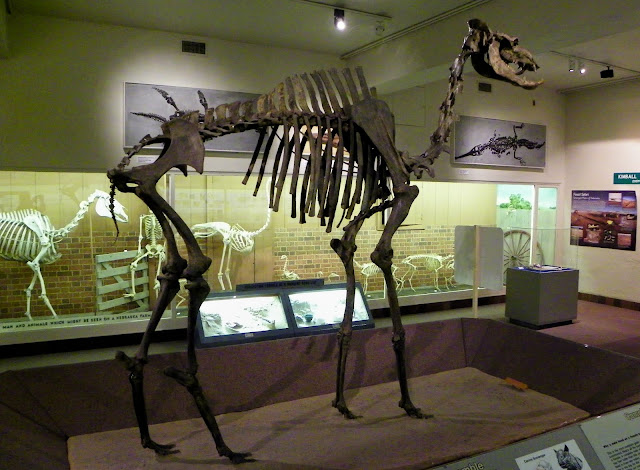 The second mirrors the Elephant Hall, though on a far smaller scale. Laid out in a similar way, again the two longest walls contain rows of fossils, with one showing the evolutionary progress of horses and the other of rhinos. Clever, creative, and through no fault of its own, a little underwhelming as you enter the room through the fantastic Elephant Hall. 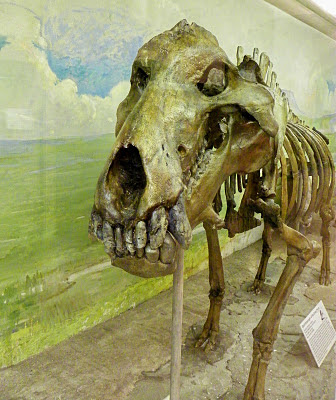 The main corridor linking all these galleries is another matter entirely as here you find the fossil mammals you’d expect to see in an American museum like glyptodonts, giant sloths and brontotheres. All are great, but what really caught my eye was the museums enormous entelodont. These killer hogs are a favourite of mine, and this specimen is impressive- I mean I'm not a small guy but this beast’s shoulders were as high as my own, and that head, that giant, toothy head, was easily as big as a hippos. 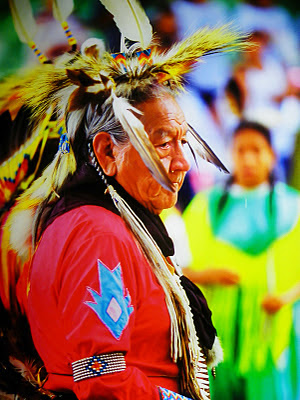 The third floor contains the recently refurbished Native American gallery and the display ‘First Peoples of the Plains: Traditions Shaped by Land & Sky’- along with a small gallery on the process of evolution. The strangest exhibit the floor (and the museum for that matter) contains, however, is the Jurassic dinosaur room. 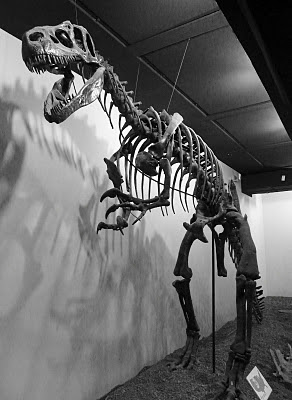 The exhibits Allosaurus, which they claim was ‘one of the largest carnivorous dinosaurs of North America’ (now I like Allosaurus, but lets be fair here, almost every tyrannosaur was larger), retains the classic ‘kangaroo-stance’, with its tail dragging along the ground. There is a paragraph of scripting explaining how our views on dinosaurs mobility has changed thanks, in part, to the study of dinosaur footprints, and goes on to explain that, though the skeleton retains the old pose, the ‘reconstructed allosaur model (next to it) is closer to the new pose’.

The thing is, it really isn’t. I think someone has tried to salvage the situation of having their dinosaurs in the wrong pose, not by actually (and expensively) reposing them but simply by writing they have done this on purpose in their scripting.
The room also contains a Stegosaurus that, peculiar for this museum, was not very well lit- especially if it’s real (or partly real), which I suspect it is. I think the museum had originally planned to highlight these dinosaurs by putting their darker forms in front of a white wall, making their features easier to see. Personally I don’t think it works as the room has a real gloomy feel and seems to emotionally push you out of the gallery as quickly as you enter. The few people sharing the museum with me this day seemed to agree as I watched them either not enter this room at all or pass through it as quickly as possible. 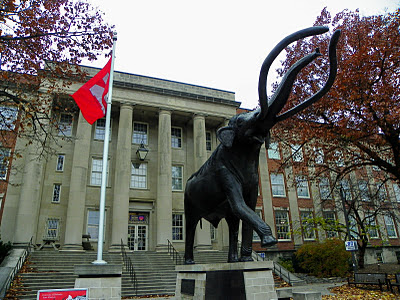 Out front of the museums entrance is a giant bronze statue of Nebraska’s state fossil, the Columbian mammoth -which I’d originally thought the giant specimen inside was. I later found out you can tell the difference between a Columbian and Imperial mammoth by the curvature of their tusks (M. imperator’s curve in more and often cross over- making Manny from Ice Age an Imperial Mammoth now that I think about it). 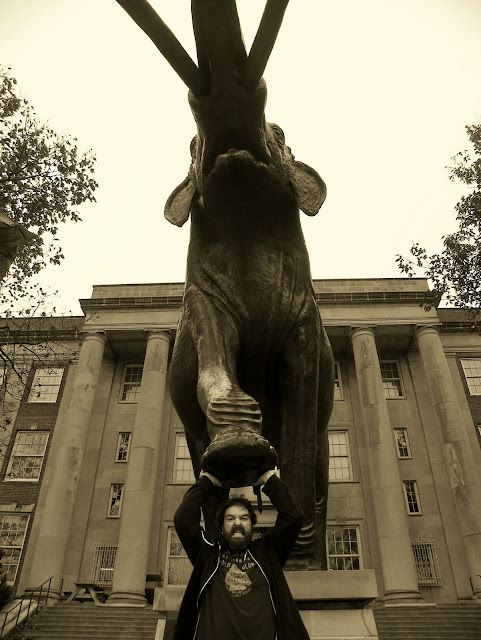 Standing on its podium, the colossal statue (nick-named ‘Archie’) with his trunk raised and foot poised to smash down and crush a puny human underneath is magnificent and, if the day hadn’t been absolutely freezing (the wind off the great plains cuts right through you when it carries a chill) I’d have gladly clowned around a little longer- but we had to move on as Nebraska had more to show us…and I was already half-frozen by the time I reached the car. 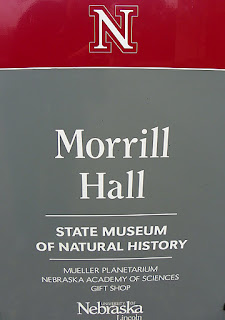 Morrill Hall is located just south of 14th and Vine Streets on the University of Nebraska-Lincoln campus. To reach Morrill Hall from Interstate 80 or Nebraska Highway 2, take 27theet, then turn west on Vine Street.

There is designated visitor parking out the front of the museum, which is located right next to what we believed was the entrance to the universities stadium. Be careful here as the 180 highway splits this part of the town and our GPS thought the roads on either side still connect.
The Museum does have an entry fee.
Posted by Phil Hore at 8:35 AM