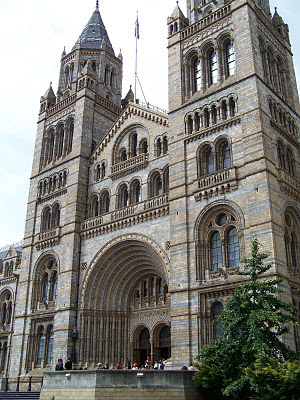 I will admit right from the start that I’m a little biased when it comes to the Natural History Museum (NHM) in London. For the year I lived in England I was lucky enough to hang around the museum’s fish department, where one of my duties was to prepare specimens to send to other institutions and replace returned specimens back in their jars. This job eventually led to me holding a tiny fish in my hand that Charles Darwin had collected on his voyage on the HMS Beagle. 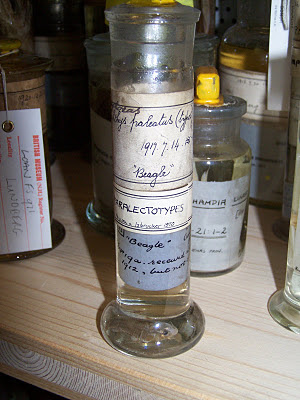 When I pointed this exciting fact out to my fishy boss, James Maclaine, he shrugged his shoulders as if it was nothing special, then, thinking for a second, replied, ‘well, as an Australian, if you liked that, you’ll love this…’ and handed me a large specimen jar with a label written in lovely cursive that simply said…BANKS…HMB ENDEAVOUR… BOTANY BAY.
Clutching the specimen tightly I grinned ‘This jar is older than my COUNTRY!’
Later, a great book by Richard Fortey had just been released (called ‘Dry Storeroom #1’) about the weird stories from the museums past. I was explaining the book to James as we were cataloguing some dried fish specimens when he smiled, looked about and asked ‘do you actually know what room we are in at the moment?’ 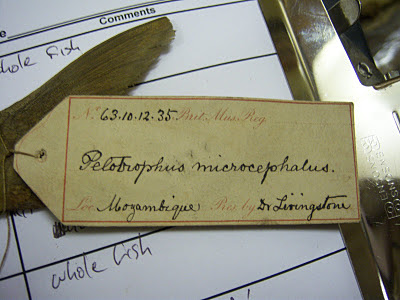 Still pondering how weird my life had become, I next found myself recording the information off a dusty old hand written tag tied to a dry fish specimen, informing the reader it had been collected in Mozambique by one Dr. Livingstone. I’m sure there’s a joke here about presuming it’s THAT Dr. Livingstone, but this memory kind of short circuits my sense of humour with the sheer bizarreness of the situation.
My point with all this is the NHM literally oozes with ‘casual’ history. For me these were lifetime highlights, but to others working in the museum, they had become everyday occurrences. I walked about, wide-eyed and awed as to just where I was…well you really had to, even most of the cobblestone streets still making up much of London’s roadways are older than the modern nation we call Australia. 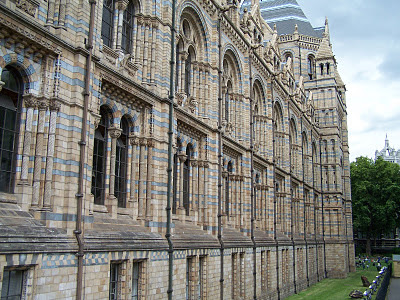 Designed and built by the man who gave dinosaurs their name, Sir Richard Owen (well, he was more like the driving force for its construction, civil engineer Captain Francis Fowke was the architect, and after his death the enterprise was taken over by Alfred Waterhouse), work commenced on the NHM in 1873, and was completed 7 years later. The collection at that time was held in the British museum, and it would take another three years to transfer everything into its new home. 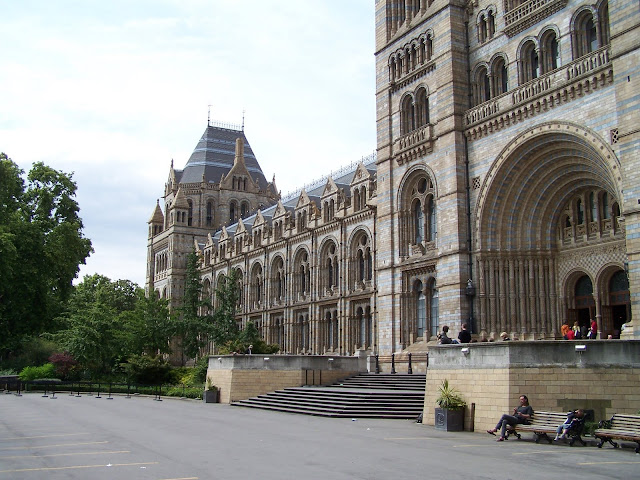 The building is a terracotta wonder- with terracotta everywhere. There are terracotta tiles and terracotta reliefs. Why so much terracotta you ask? Well terracotta doesn’t stain as much as other stone, and for coal powered Victorian London, that was a real issue. 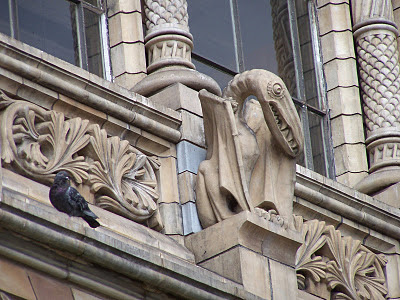 Hailed as ‘a true temple of nature’ and ‘the animal’s Westminster Abbey’- Owen hated the idea science was being hidden away from the public by a select few, so through his efforts this new museum was designed to welcome the general public and excite and educate them about nature.
Looking at the main entrance from Cromwell road, you’ll notice both ‘wings’ of the museum are covered with gargoyles and statutes of the most impressive design. It took me a while to realise that running along the east wing, these statues depict extinct animals like pterosaurs and saber-tooths. Running along the west-wing are modern animal species like lions and dogs. 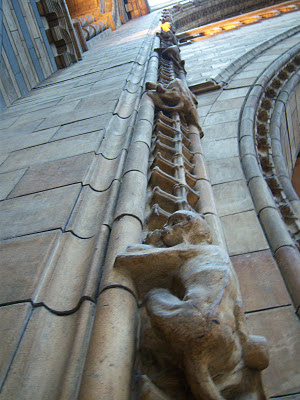 The inside of the museum is as elaborately decorated as the outside. Each column is intricately carved with the pattern of a fossil tree, often with a monkey or some other equally acrobatic creature of stone climbing up or peeking at a visitor from an elevated vantage point.
The base and top of these columns also sport an animal head or some other natural image carved into them, while the columns themselves support an arched roof, which has been segmented into a number of panels, each with a botanical specimen painted across their face. These represent the planet (including Australia), and often sport their scientific name. 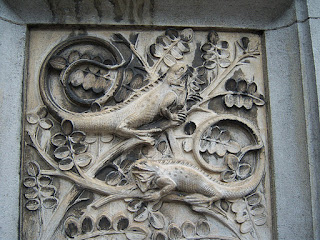 Not even the walls escaped Owen’s and Waterhouse’s attentions as many have natural history carvings over them, plus the functional elements of the museum (like grates and air ducts) have intricately carved insects or flowers carved across their faces.

Though I was mostly in the more recent Charles Darwin building, I spent a lot of time in the ‘Waterhouse’ building, which was simply fantastic. Not once did I walk past its front façade of intricately carved gargoyles, ornate architecture and tall spires flanking the main entrance, without smiling to myself. The museum truly deserves its moniker, ‘the Cathedral of Science’. 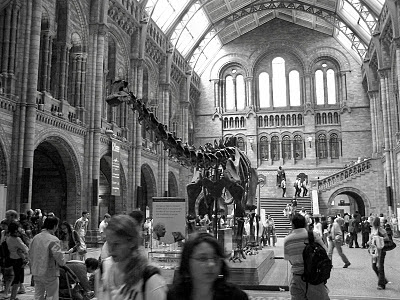 Through those main doors is the Central Hall, resplendent with a grand staircase dominating the far wall. With its high ceiling, flying banisters and staircases, towering, ornately carved columns, the Diplodocus standing in the middle of the foyer looks almost small…almost. It was under this dinosaur that I met Sir David Attenborough during his latest book signing- so as you can see, even the public events there have a class few other museums can match.
As the museum has grown over the years, its expansion has taken over smaller entities such as the previously adjacent Geological Museum of the British Geological Survey- and these collections needed new rooms and galleries to store them in. The corridors to these galleries (called zones) containing the dinosaur, mammal and mineral halls radiate out like the legs of a spider, The most visited is the dinosaur hall in the ‘Blue Zone’, and as much as I love the museum, I’m no fan of this display. With limited space the curators have tried to place as much as possible in the hall, but to accomplish this they have built a two level exhibit where you walk along a scaffolding walkway running along the centre of the room to access the higher exhibits. The problem is, to take the weight of this walkway the room is now filled with support columns and cables. More wires have been used to ‘hang’ specimens off the floor, making it almost impossible to see anything without a number of cables and poles in the way. This design has also made many exhibits inaccessible, and they’ve become very dusty because of it. There is also little lighting in the room, and what there is, generally, is pointing into the walkway, blinding a visitor’s view. It’s also impossible to move along the catwalk if there’s a large crowd, which being the NHM, there almost always is. 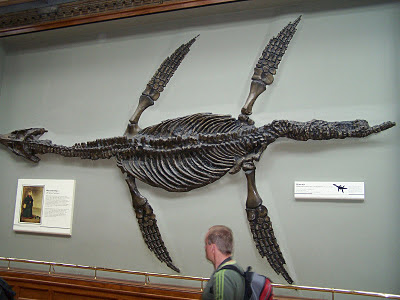 Still, there’s a lot to see, and the rear entrance of the hall dumps you into a large corridor with an entire wall devoted to the marine reptiles of the Mesozoic. Pliosaurs, plesiosaurs and ichthyosaurs hang along one side, many collected by Mary Anning herself. ‘She sells sea shells by the sea shore’…nothing more needs to be said about this pioneer of palaeontology, who dug up most of the specimens from near her home at Lyme Regis. 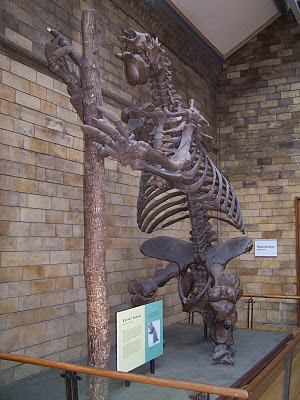 The far end of this corridor contains a gigantic Megatherium, reaching into a tree with its enormous, foot long claws. Behind this, as though the monster is protecting the tiny, unobtrusive door, is the palaeontology offices and storerooms.
Unfortunately, in my last days I was offered a position (which I couldn’t take up as I was leaving) to help organise and catalogue the museum theropods in one of these storerooms. During my introduction to the job I was given an extensive guided tour, and was floored when in one entire row of cabinets I got to see the museums tyrannosaur- in fact you could call this THE tyrannosaur, as this was the specimen Barnum Brown discovered in 1900- the one Henry Fairfield Osborn described as Dynamosaurus imperiosus. In the same journal, just one page earlier, Osborn also described another large carnivore, which he named Tyrannosaurus rex. As the T. rex description came first in the journal, when it was decided both animals were in fact the same species, it was the earlier published T. rex (by one page) that was deemed valid, even though the Dynamosaurus specimen had been found earlier.
Another bank of cupboards in the storeroom also had  the fossils Richard Owen used to describe and name many iconic prehistoric Australian marsupials. This included the fossils of the rhino-sized wombat, Diprotodon, and the lion-like carnivore, Thylacoleo. I have to say, my time here was brief, but an absolute thrill. 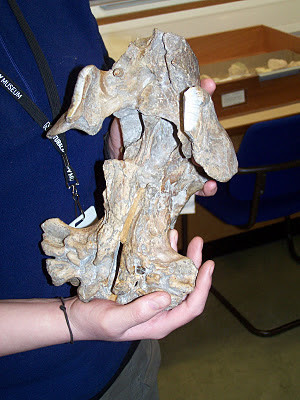 Back out in the museum proper, the corridors continue through the back rooms. Here you’ll find displays of birds, bugs, reptiles and amphibians, most of which make up the Green Zone (and part of the Blue Zone). One set of stairs there tries to pull the visitor up into the Red Zone, where much of the geology displays can be found. This passage cuts right through a giant globe, while the display before the stairs show mythological statues and how some of their origins, like the Cyclops, can be linked to fossils. 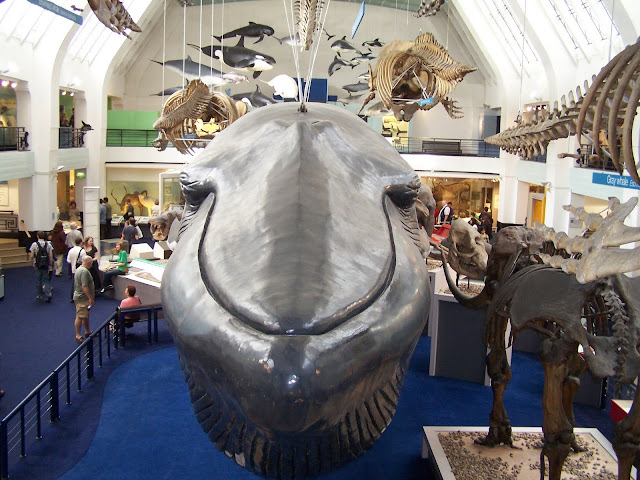 The rear of the museum houses the mammal hall with a Blue Whale skeleton and life-like replica hanging from the roof. Behind the behemoth a pod of every sort of dolphin you can think of swims in its wake. The wall behind those contains a wonderful display of cetacean fossils, explaining how a wolf-like sheep evolved into the whale soaring above everyone’s head. There’s a lot in this room- maybe a little too much if you want to be critical. Some displays feel crowded, as though its designers knew they had only so much space and were determined to get as much as they possibly could into each cabinet. I still like this room however, and will always defend it for the way it displays not just one elephant, but a series of elephants and their own evolution along one side of the whale. I feel the way we look at an African elephant and get a sense of just how tiny and fragile a mammal we are, the elephant, if it could be questioned, I’m sure would feel the same way standing next to the whale and staring it, cowed, in the eye. 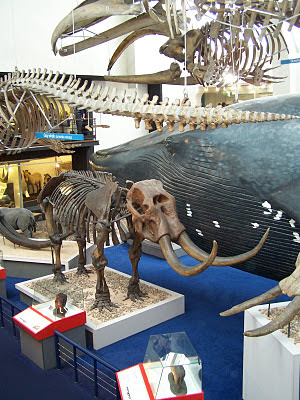 A few more twists and turns and once more you’re back in the amazing entrance foyer and climbing the grand staircase into the two side galleries upstairs. As you walk up to these, make sure you give a nod to the Richard Owen statue and thank him for having the vision to create the modern museum we know today. 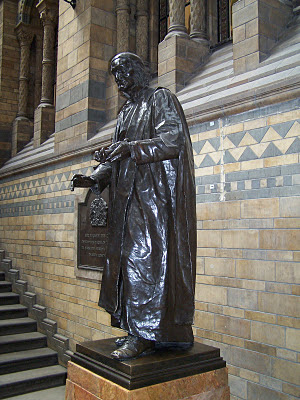 The upstairs galleries contain a temporary exhibit (no idea what that would be today- but when I was there I think it was displaying award winning wildlife photos) and the human evolutionary gallery. Through the sweeping arches of the second hall you’ll see through the gaps in the columns some monkey skeletons swinging across the galleries roof. There are a lot of important fossils here, examining our own past, but the one that really caught my eye was the extinct Giant Lemur of Madagascar. 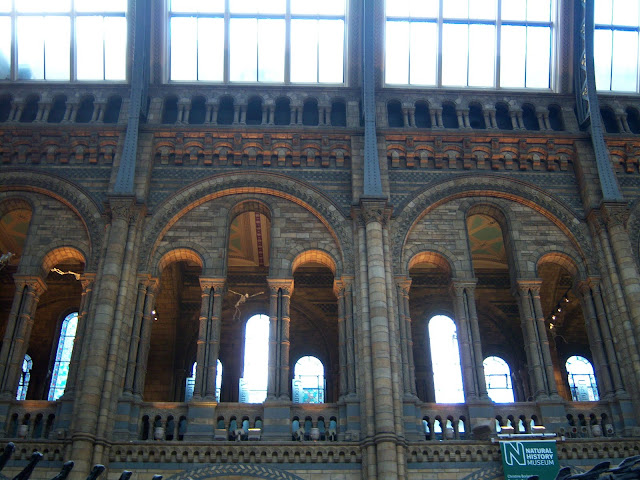 Both side galleries converge at the front of the hall at a magnificent flying bridge arching over the Diplodocus beneath, that connects both sides of the second floor. Underneath, along the sides of the main entrance, are a number of recessed alcoves containing impressive fossils like an ichthyosaur, Paracylotosaurus, and a complete Moa and Dodo.
Seriously, I love this building and spent many happy hours just walking about, taking it all in. If you plan on visiting London in the future, please make time for the NHM in South Kensington- I promise it will not disappoint! 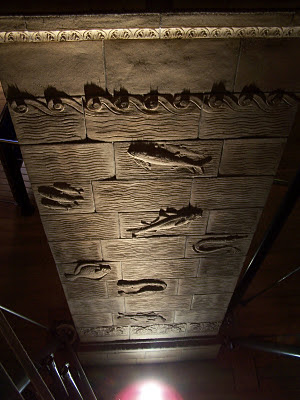 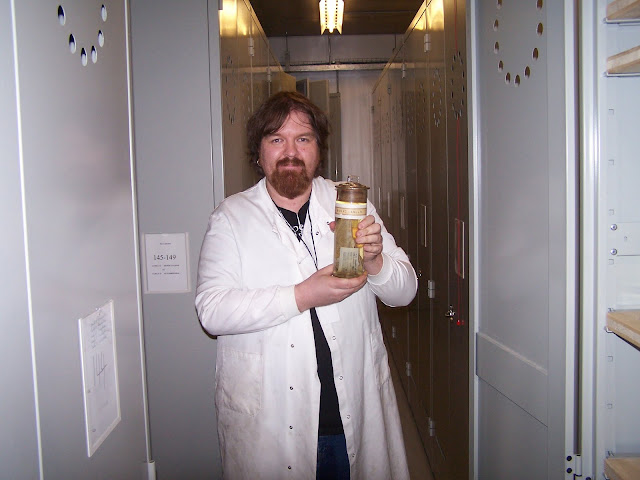 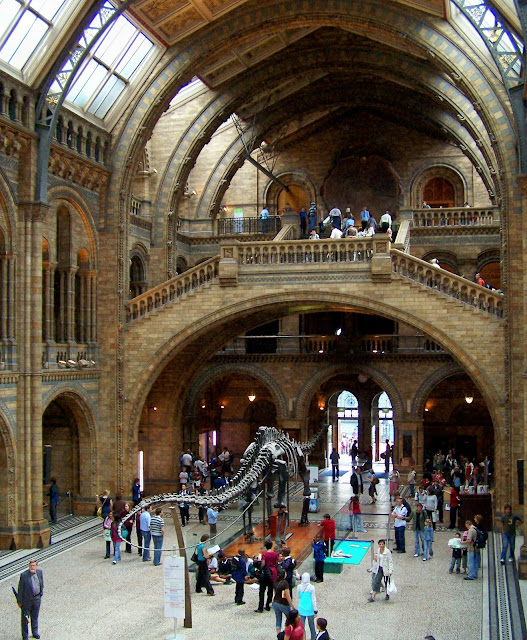