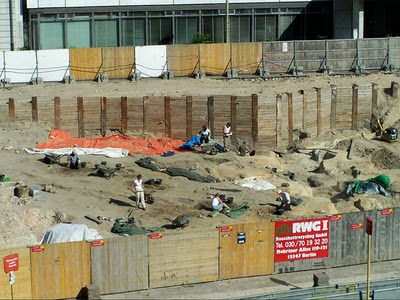 Berlin is a funny city. Everywhere you look its being rebuilt in huge, dramatic slabs. I can’t think of a single street I was on that didn’t have some major works, be it road or building, going on somewhere. Amazingly, from the window of my hotel I could even see into one such construction project where the excavators seemed to have uncovered some sort of burial ground. From my lofty vantage point I watched as people (who I assumed to be anthropologists) unearthed a number of human skeletons, many of which were clearly visible.
Were these ancient human burials or Berlin citizens buried during the destruction of the city by allied bombers during the darkest days for the city during the Second World War? No one could answer me. 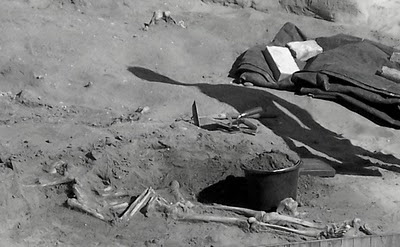 I awoke on my third day in Germany more than a little excited. Today I was going to visit the Berlin Natural History Museum, home to the world’s largest, most complete dinosaur skeleton. This was something I honestly never thought I’d get the opportunity to do.
As a kid in Australia I had read everything I could get my hands on about dinosaurs, yet never actually saw any until my late teens. Australia in the 70’s and 80’s just didn’t have the natural history museums other countries had, so to see one was a rare treat. 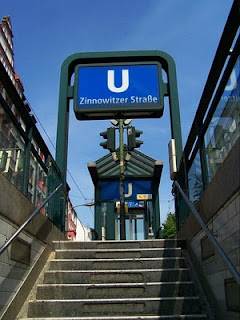 Racing down to the nearest U-Bahn station, I grabbed a daily ticket and worked out just how to get to the museum. Almost every computerised system in the city has a German-English button on it, while the Berlin people themselves are fantastically helpful. I swear, you even look a little lost and you’ll have a dozen people running up to see if they can help.
It looked pretty easy, catch a train four stations west, jump on the U6 for about eight stations and get off at 'Zinnowitzer Straße'…no problem. The trains in Berlin are a little weird. It’s not that they aren’t neat and clean (which they are), it’s that many seem to be from a 40’s or 50’s film noir. There’s little of that universal stainless steel and moulded plastic, easy to clean, impossible to damage, fittings that most major city trains have these days. These were old style carriages with wood panelling.
After a short journey it was off the train, up the stairs, out the station and, with a quick hop to the left, I found myself standing at the steps of the Museum für Naturkunde Berlin. The first thing I noticed about the museum as I approached its grand, front stairs was the patched repairs across the buildings face. 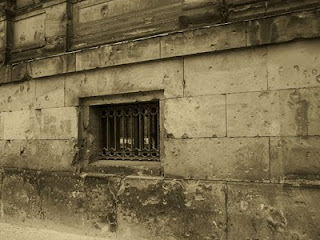 These are obviously covering the scars of a war fought over 60 years ago- and the museum is by no means the only building in Berlin to so visibly wear its wounds in such a startling fashion, its just the one I was the most shocked to find them on. I guess when the Russians are flooding the city any sturdy building will do to make a last stand!
The second thing I noticed about the museum was the door was locked…well, that’s not entirely true. I actually noticed a lovely old gentleman who began speaking to me in German- a language the only words I know being from reading war comics when I was a kid. 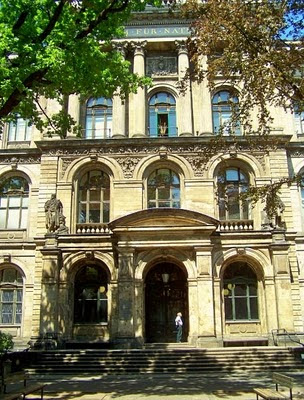 As I didn’t think it would be polite to yell ‘ACTHUNG, SCHWEIN-HUND’ at him in the middle of the street, I smiled and said ‘SORRY, DAST SPREAKEN ZEE ENGLISH!’ I always find its best to talk in English while badly mimicking the language you’re trying to converse in as loud as possible. It seems to do the trick every time.
‘Oh, you’re Australian…’ said the clearly English gentleman, ‘…I hate to tell you old boy but the museum is closed today. The sign says it’s always closed on Mondays.’
The man had been born in Hamburg where he’d recently retired too, and had travelled to Berlin to see the dinosaurs he’d known in his youth. After a quick chat, were the gentleman told me he was keen to see if the dinosaurs were really as big as they were in his childhood memories, we parted, with me giving him a friendly wink that we’d probably meet again tomorrow. Disappointed, I headed back into the city to find a cold drink as the summer heat was becoming pretty ferocious, even for an Australian. 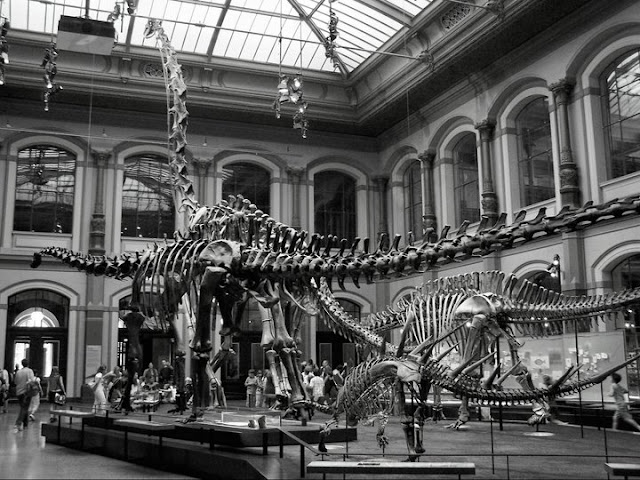 The next morning I got up a little less enthusiastically and retraced my steps from the day before. My whole life, just like most of you, I’d been reading about the brachiosaur that apparently dominates the main foyer of the museum, so was keen to get in there and start poking around. 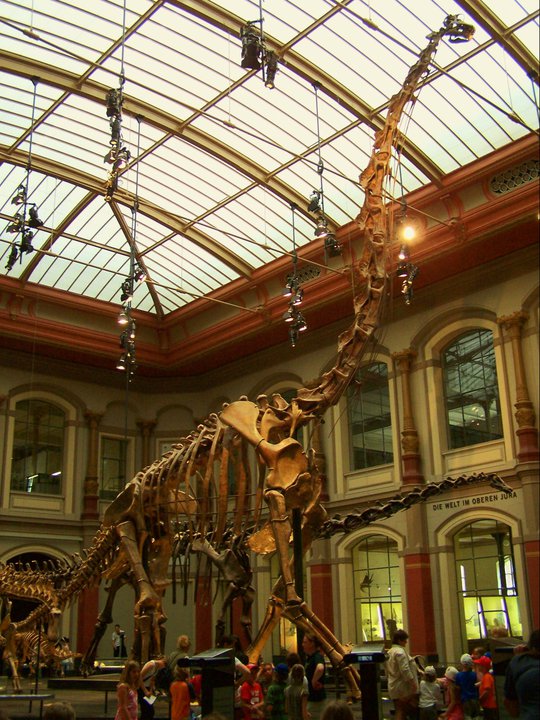 This time to my relief the front doors were wide open and I joined the gathering crowd in the entrance. A handful of Euros later and it was through the entrance hall (which isn’t much to look at) and into the foyer on the other side, to a view that simply floors you. The Brachiosaurus standing guard over the entrance to the museum proper is everything you could hope for and more. It’s simply huge.
Next to the skeleton is a much longer Diplodocus, yet this Carnegie specimen is dwarfed by the monster standing next to it.

The ‘World of dinosaurs’ exhibit is one of the best I’ve seen anywhere. There’s plenty of dinosaurs and they’re placed far enough apart so you get a good look at each of them. They’re also on little ‘islands’ so you can walk around them and get a good look from any angle you’d like.
They’re also extremely well lit. Rarely did I find myself shading my eyes from a regrettably placed halogen globe as I tried to get a good look at a skull or bone. Importantly the colours on the surrounding walls and podiums also don’t clash with the fossils- meaning they don’t disappear into the background the way so many skeletons in other museums do. I was beyond impressed.
Chatting with one of the managers, I found out the entire exhibit had recently been redesigned, pulled down, cleaned, and then placed in its current configuration- a process that was soon to spread throughout the rest of the museum’s halls.
My admiration for this display only grew when I investigated a series of binoculars that stood in the corners of the dinosaur hall. These were always surrounded by kids and I never really gave them much thought until I walked past one and noticed what was going on. The binoculars aren’t really binoculars- instead they’re tiny TV screens called ‘Jurascopes’ that show the exact image of the dinosaur you point them at- from the very perspective you’re standing at. 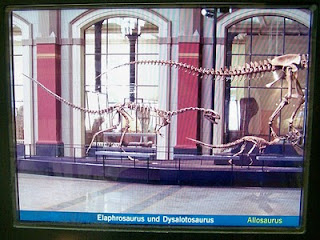 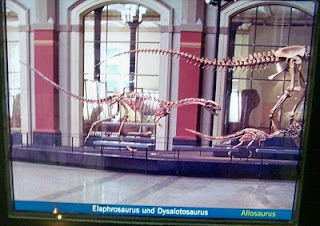 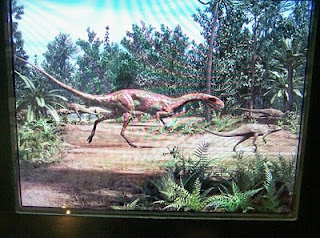 Its one of the most fantastic, imaginative dinosaur displays I’ve encountered in my travels and I have to congratulate the ‘intelligente Hosen’ (Smarty Pants for those non-German speakers out there) who came up with the idea- you were certainly on the ball that day. 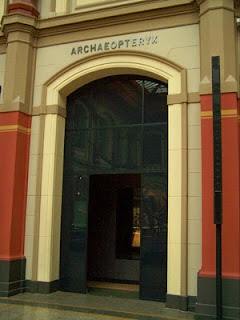 It was while watching one of these binocular-videos that I noticed the rear wall of the hall had a single doorway with the word Archaeopteryx blazoned across the doorframe.
In my excitement to see the brachiosaur I’d completely forgotten the museum was displaying its original Archaeopteryx plate. With an odd reverence I walked into that darkened alcove, built for a single fossil that’s been shown more respect than the Mona Lisa (which for those who haven’t scene it is just on a blank wall in the middle of a large room). 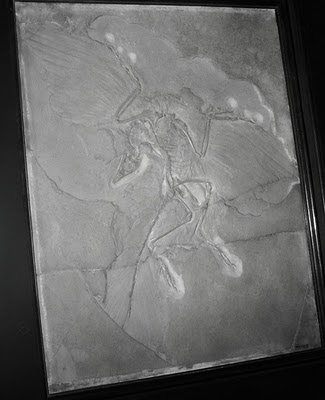 Peering down at this famous, oh so familiar specimen, I watched as a series of different lighting effects ran across the fossil, highlighting different parts of the body with a clever use of lights and shadows. It was also kind of weird to note that, the entire time I was in the ‘World of dinosaurs’ hall, I was the only one who went inside to look at one of the most important fossil displays on the planet.
As great as this front hall was- I’m afraid much of the museum from this point on fell far short of this initial presentation. 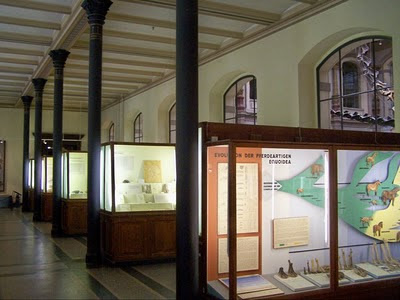 The prehistoric and mineral galleries were in the old style, with bookshelf displays and glass fronts presenting a specimen in front of a white washed wall, more often than not with a single slip of paper with a hand written name scrawled on it. Worse still, several rooms were completely closed- a crime as far as I’m concerned. Certainly museums have to ‘rework’ their displays, but you do them one at a time, thus cutting down the disappointment of people who have travelled a long way, perhaps on the trip of a lifetime, to visit your collection. Sadly, many of the specimens were also quite poor; I mean you’d expect a German museum to at least have some decent crinoid, ichthyosaur and fish specimens. Instead they showed stuff of equal (or worse) quality then those at the fossil shops I have worked for. 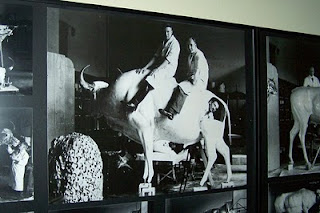 Things picked up once more in with the modern zoology hall. 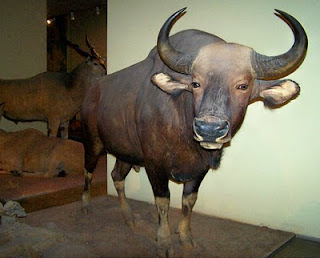 Having created moulds for the animals on display, these were life-like and were as good or better presented than many stuffed specimens I’ve seen around. These rooms also felt newer, thus, hopefully, are an example of what is happening in the closed rooms and hopefully is what’s to befall the tired displays of the fossil and mineral rooms…and of course there’s that dinosaur hall you have to walk through to exit the building. 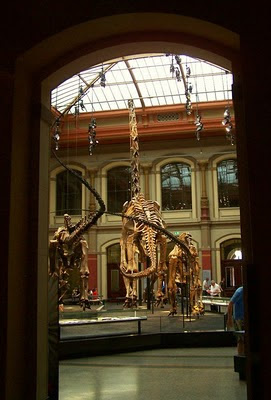 About the room are several dinosaur skeletons, including the stegosaur Kentrosaurus, the iguanodont Dysalotosaurus, the small sauropod Dicraeosaurus and the theropods Elaphrosaurus and Allosaurus- all of which were found at Tendaguru in East Africa by German palaeontologists in the years leading up to the First World War.

The room also contains a number of pterosaur and fish fossils from local German quarries.
As impressive as these are, they cannot help but be mere background for the Brachiosaurus (recently renamed Giraffatitan- a change I hate and I’m pleased to see the Germans themselves haven’t picked up on according to the museums website). I just couldn’t take my eyes of it. Not only was the size staggering, it was also the colour. The brachiosaur bones are a warm, almost honey shade of brown, and they’re simply the prettiest fossils I’ve seen in my life.
One can only imagine what it would have been like to see one alive, walking about with that huge neck swaying like the mast of some old man-of-war in a high swell, its elongated length amplifying any movement the body makes.
As I said before, something this staggering and unworldly sends us back to our childhood, to a time when we walked about in a world filled with giants. 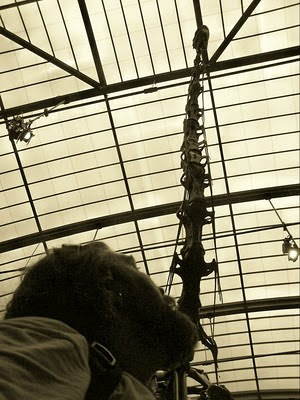 Oh- and I never did bump into my friend from the museum steps on the previous Monday. I did find myself wondering if the dinosaurs were as big as he’d remembered them being as a child. I can only hope so…
As a side note- visit the Berlin zoo if you get the chance. Not only is it a great zoo, but the attached aquarium (the original being destroyed in the Second World War) had a great Iguanodon at its entrance, while the walls are covered with prehistoric mosaics and wall art. 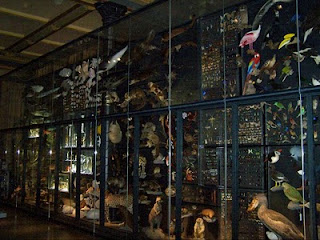 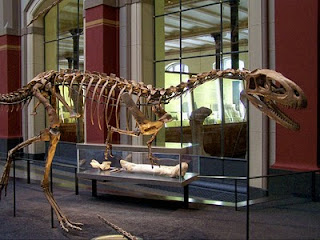 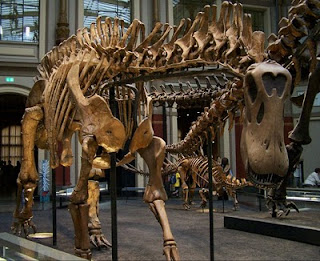