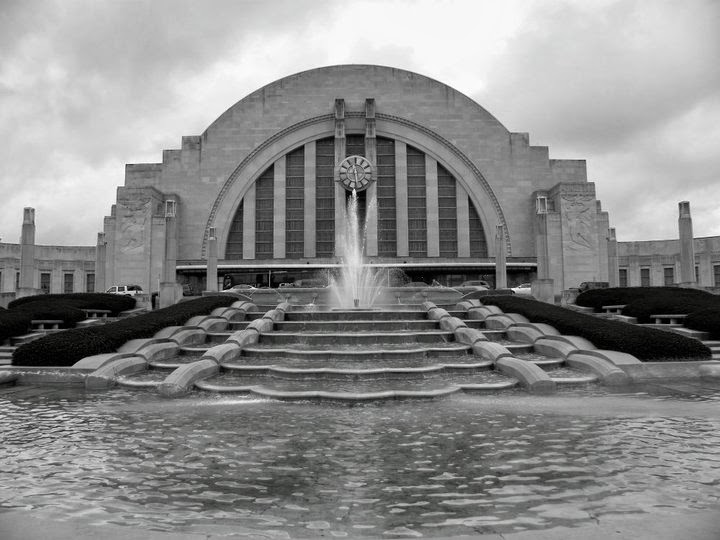 Though I work today in the Natural Sciences, for most of my life I was actually a comic book geek who grew up readings Marvel comics, working in comic stores and of course watching cartoons on Saturday mornings…and early on a favourite was the Superfriends. The stories of DC comic’s top guns- Superman, Batman and the rest of the Justice league- operating out of one of the coolest looking buildings ever, ‘The Halls of Justice’, was good fun when you were a kid. Imagine my surprise then when I discovered the iconic home of the Justice League was based on a real building, and even better, it today houses a natural history museum. 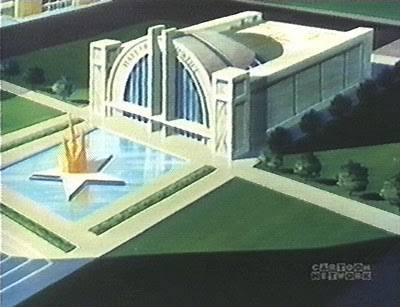 At the beginning of the 20th century Cincinnati was a major travel hub in the US as many of the train lines linking the east and west passed through the city. To facilitate all the trains entering and leaving, an enormous station to house not only the 216 trains a day and the numerous passengers, but the business surrounding such travel was designed and built in 1933, sadly just in time to witness the step decline of train travel. Within a decade the fabulous Art Deco building Cincinnati had built, Union Terminal, became underutilised as train travel ended when cars and cheaply run bus lines took over many routes. This decline continued until 1971 when AMTRAK took over much of the national train service, and from the hundreds of trains a day Union Terminal saw when it first opened, the station was now only seeing a handful a week. 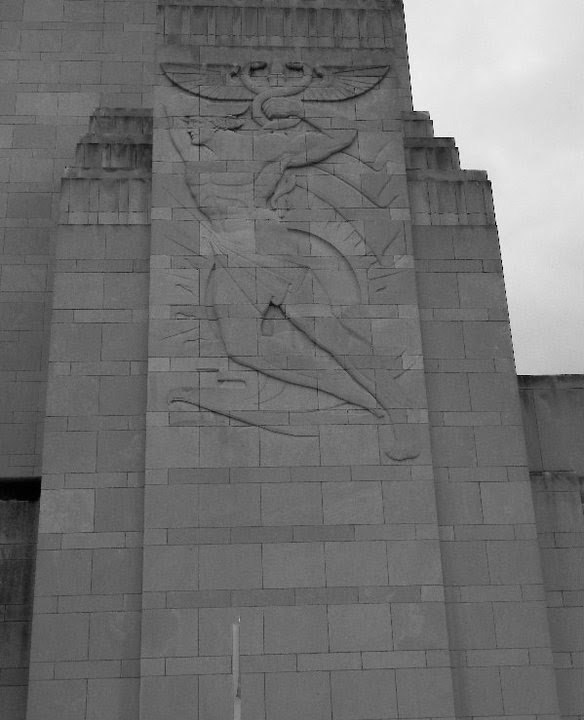 Local population dynamics had also changed within the city and people simply didn’t want to catch a train into the centre of town, only then to travel out of the city to their homes in the suburbs. To facilitate this shift, in 1972 trains stopped arriving at the station all together and the building was left to its own devices.


Later in the decade a freight train company wanted to buy the land and completely renovate the building to house their far larger freight carriages. As this process was begun and some of the building was being pulled apart, there was a move to save the amazing building from total destruction and the issue was brought before Cincinnati’s city council. This body voted to protect the iconic building and gave it historic landmark status. Sadly some of the art work the building once housed had already been destroyed, but enough was saved to make the entire process worthwhile.

In 1978 it was decided to renovate the building as a large shopping centre called ‘The Land of Oz’. This gave the building some life for a few years, before falling sales meant many businesses left and the building once more fell into disrepair. By the 1980’s there was a new push to demolish the building for its valuable land, but there was an even stronger movement to save the building led by none other than Cincinnati’s infamous mayor at the time, Jerry Springer (yes that Jerry Springer). The idea was to change the building into a museum centre, which after several years of renovation, opened in 1990. Amazingly this change also brought back AMTRAK, with a number of trains now arriving at the Union Terminal every week.


Today the complex hosts the Robert D. Lindner Family Omnimax Theater, the Cincinnati Historical Society Library, the Duke Energy Children's Museum, the Cincinnati Railroad Club and the Museum of Natural History & Science (MNHS)- one of the most underutilised museums in the world. 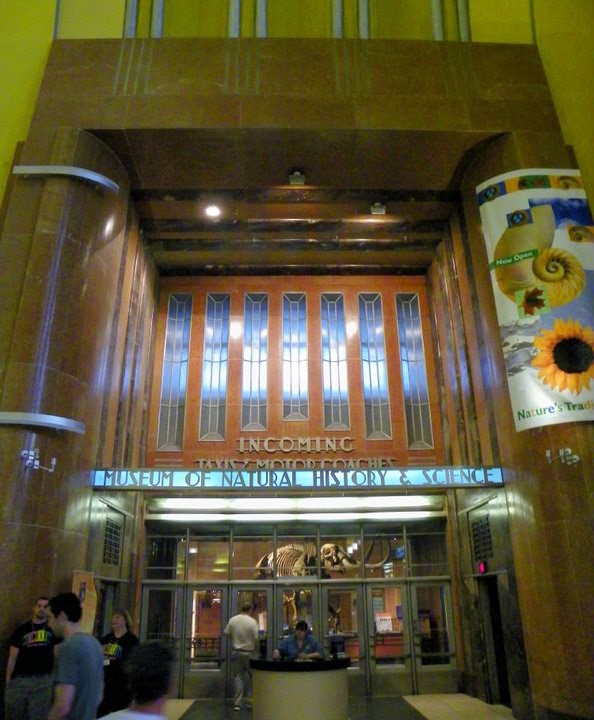 Let me explain this last comment. Just a few miles down the road is the Creationist Museum in Kentucky which, I have to say, is far inferior to the MNHS, and not just because one doesn’t involve an almighty invisible friend. The problem is when we visited the Creationist Museum it was packed. To give you an idea of visitation, its car park is so large it had State Troopers directing traffic inside. On the other hand when we visited the MNHS, it was all but empty, with many dozens of people inside compared to the several thousand up the road. This is a shame as the MNHS is one of the best looking museums I have ever been to even though hardly anyone has ever heard of it. 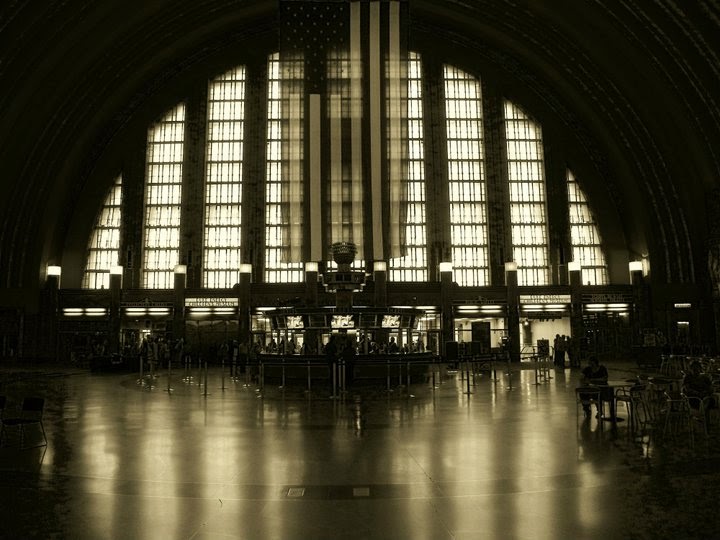 Inside the Union Terminals main foyer the renovators have kept the very handsome art deco feel- even the door handles look great in this building and it was a real pleasure just to walk around and take it all in. The high domed ceiling is stunning, especially when bordered at one end by the amazing front glass wall. Where travellers once entered the various stations for all the train lines Cincinnati once controlled are now the entrances to all the various museums. 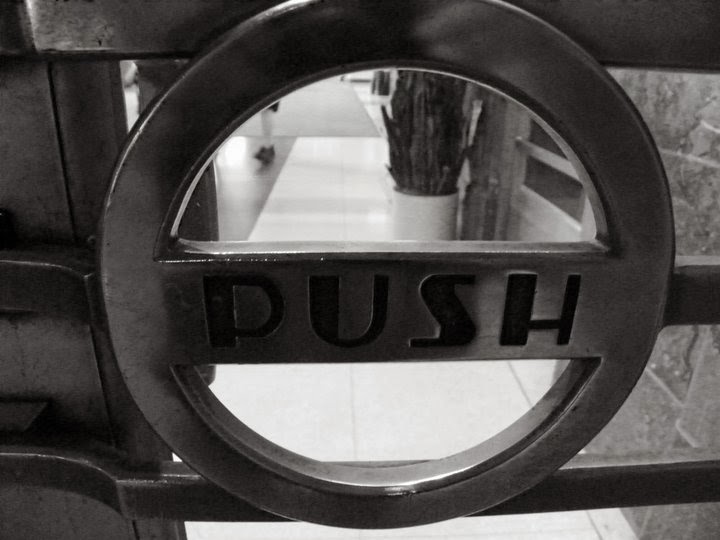 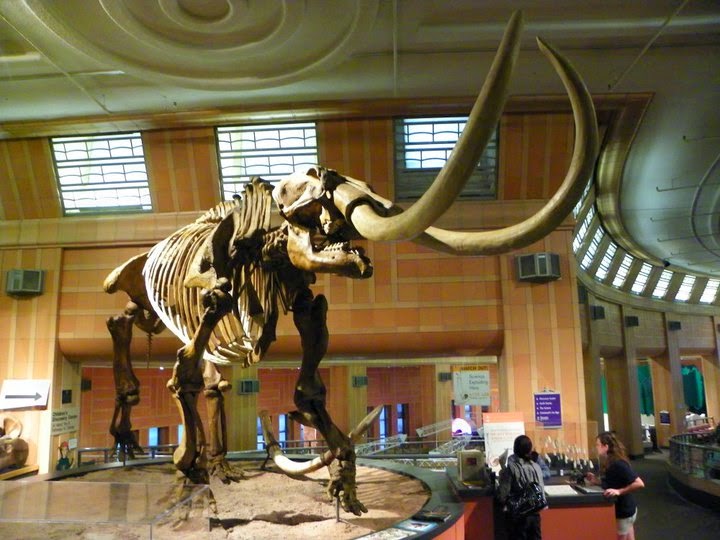 It must be said my first impression of the MNHS was decidedly underwhelming. It’s not that it was bad, it was more that is was indifferent. The opening foyer is a collection of somewhat unrelated displays tied to a very strange looking art deco room. From one spot you can see a very nice Mastodon, what looked like a traveling carnival, if I recall correctly a NASA spacesuit, a snarling grizzly and a smallish animatronic sauropod.
﻿

Clearly stuck with an awkward space that is basically a long corridor snaking its way down into a building where people once caught trains, the designers of the museum have created a very clever, very imaginative display. Once past this opening gallery the visitor goes on a journey of the local regions natural history. 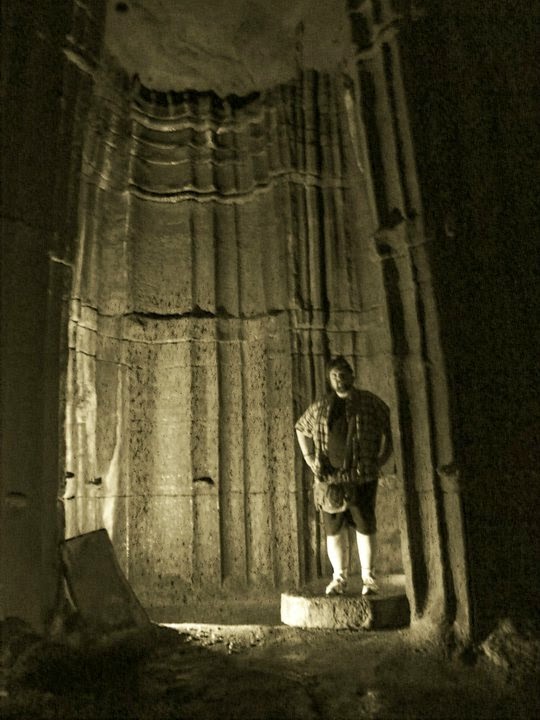 The first real display is a large cave system that has been recreated inside the old train stations walls- indeed it’s the recreated environments that are the highlight of this museum and I must say they are done far better than any other I have ever seen- and I have visited a lot of museums over the years! This manmade limestone cave systems contains an underground waterfall running past enormous stalactites hanging within a number of large galleries.

There is running water everywhere in this part of the museum and I do believe it currently even contains a real bat colony- though I don’t recall seeing this during my visit. This display is apparently based on local caves and runs for a whopping 500 feet of galleries and subterranean nooks to explore. Understanding that the cave is not for everyone there is also a ‘beginners’ path that is wheel chair accessible.


The cave system ends at a second corridor where the visitor enters what looks like another cave- but not before walking through a large snow/glacier field with life-size musk-ox and even a little iceberg floating in a pond.

Passing through what must have been a water-melt passage THROUGH a glacier, itself cleverly lit to seem like you are in a luminescent mountain of ice that leaves you on the tundra of the greater Ohio region 19,000 years ago. 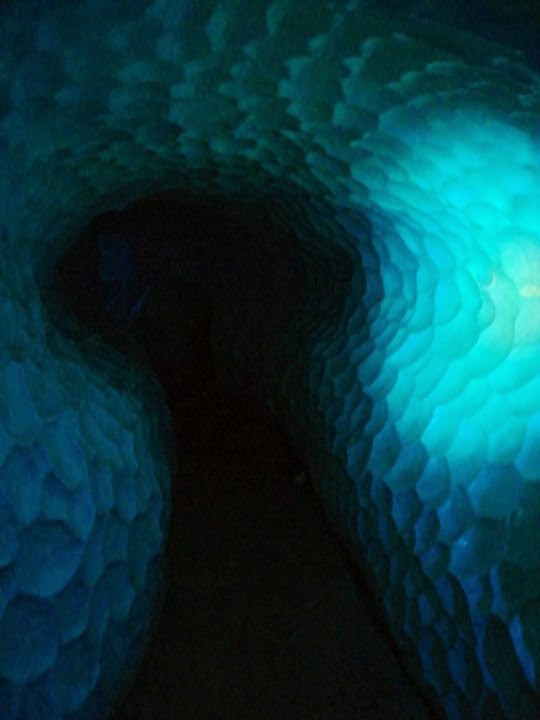 Accompanying you on the path down into the heart of this glacier is a running water stream which gives you the noise and fresh clean smell of running water.


Outside the tunnel is the jewel of the museum as far as I’m concerned and one of the best features of any museum on the planet. On the ‘Ice Age Trail’ the use of murals on either side of the corridor to send the display off into both horizons is unbelievable. You find yourself standing in a bleak river landscape clearly feed by the run off from the glacier.

This is an interactive display that you get to walk through, with river pebbles and hills somehow built to survive the dozens (sadly) of people I saw visiting the museum. About you charge wolves, while hiding in one corner of a rocky outcrop is a Smilodon family, before you move into a forest of ancient Kentucky populated by giant sloths and drowning mammoths. 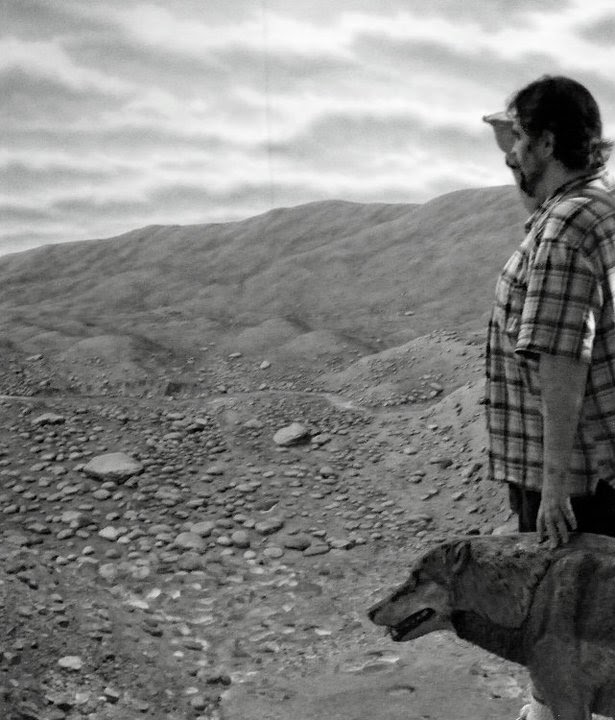 What a space and it doesn’t end there. There is a gallery of fossils for all the species found in the Ice Age display, along with many others like the enormous longhorn bison. 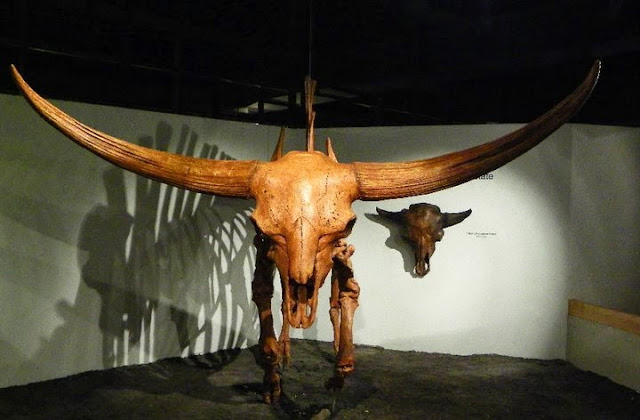 Outside of this gallery the museum turns more traditional with fossil displays from most ages of prehistory- yet even here these often contain a life-like environment giving the visitor a glimpse of what the world may have looked like back then. These seem to be positioned by time (oldest to youngest) if my memory serves me correctly and again give what could be a confining space with a large group a feel of openness.

Unusual for a US museum there isn’t a large dinosaur display, but what there is was very well done. There are flying pterosaurs soaring overhead- an accomplishment for such a corridor like passageway- and the dinosaurs themselves are cleverly done.

The main feature is a large Allosaurus skeleton dominating the middle of the room, but I really liked the wall of hadrosaur skulls. These have been recessed into a rock-like wall that visitors can touch and clearly give the room a little more space without the need of bulky cabinets.

The visitor eventually walks out of the long but thoroughly enjoyable trail through the regions ancient history and back into the main hall of the Union Terminal. For us this is where our visit ended as we needed to get back on the road, so I was a little disappointed I didn’t get to spend more time in this iconic building from my childhood. I did manage to get a truly geeky photo before leaving the museum’s ground however. 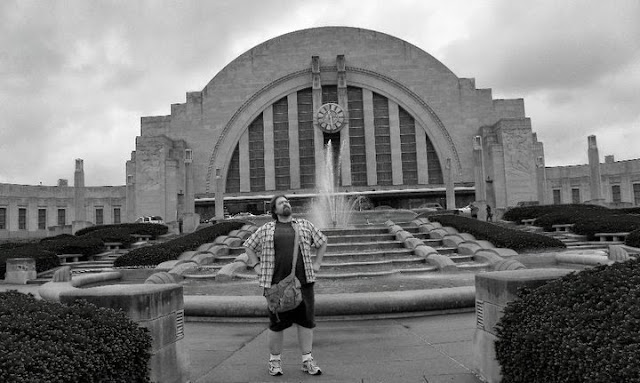 So, if you ever visit the Creationist Museum in Kentucky (which I know many of you plan to do one day), leave yourself some time to visit a true jewel. You won’t be disappointed! 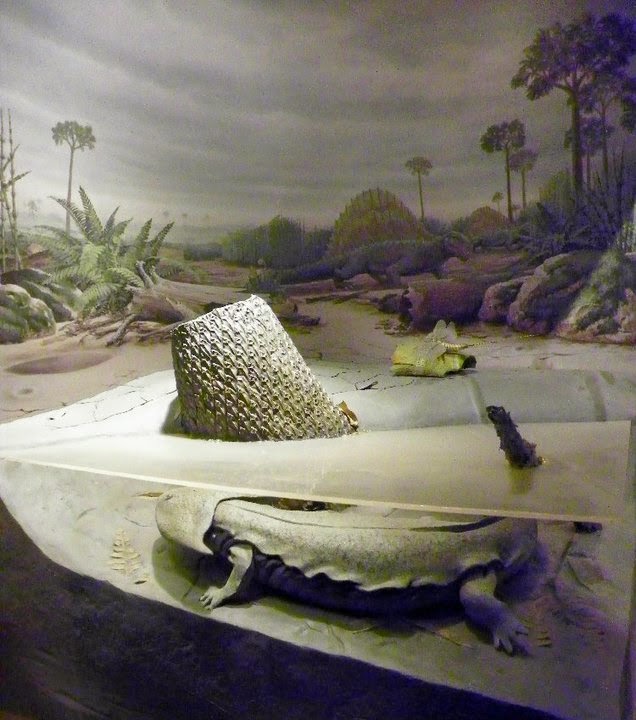