Hobart is Australia’s second oldest capital city and a walk of its streets can produce some surprising rewards. Recently I had the chance of representing not only the National Dinosaur Museum, but Canberra’s scientific education institutions at the 2017 CONASTA conference - held yearly for Australia’s science teachers - with the National Capital Education Tourism Program (NCETP) folks. I visited a number of historical and scientific institutions (more on them later), but it was Hobart itself that really caught my imagination. 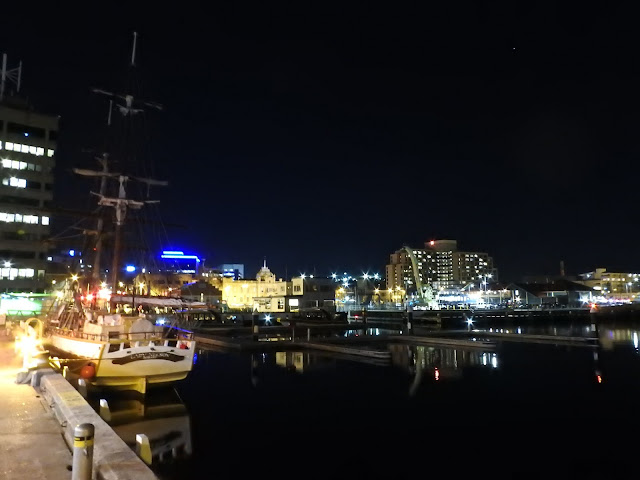 Walking along the harbour you will notice a number of vessels docked that you can approach, and some you can even sail upon. As the city is located at the bottom of Tasmania and faces Antarctica, the harbour is home to a number of polar exploration vessels, including the Australian built icebreaker, Aurora Australis. Having spent a lifetime supporting polar research, sadly the time for this ship is almost up as the Australian government has recently announced the retirement and replacement of the Aurora, with a new ship promised by 2019. 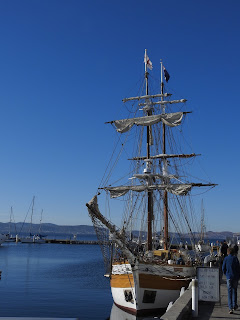 For a natural historian the vessel that really put a smile on my face was the replica of the HMS Lady Nelson.
The original Lady Nelson was ordered to Australia in 1799 to help survey the continent’s coastline and help claim more territory for the British Empire. To complete its mission the vessel joined Matthew Flinders and the HMS Investigator in creating the first complete map of Australia. 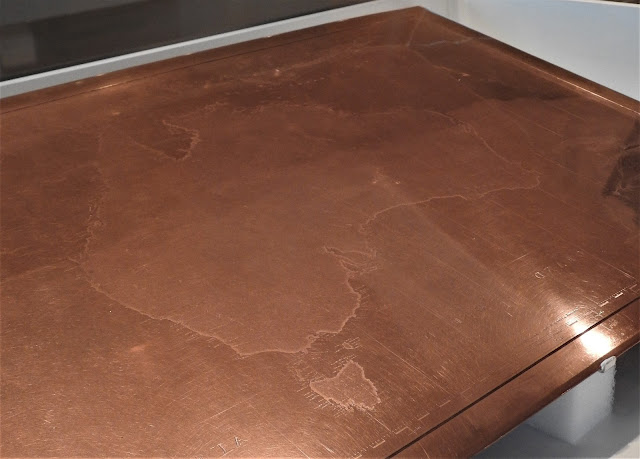 NOTE: The original copper printing plate for the very first complete map of Australia was on display at the Tasmanian Museum. This is part of a touring display of France’s own investigation of Australia and its part in the mapping of the island continent by Nicholas Baudin, called 'The Art of Science: Baudin’s Voyagers 1800 – 1804' (There will be a report on this later as well). 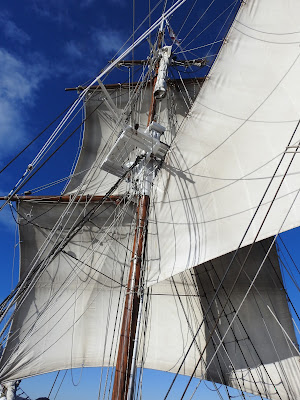 The Lady Nelson was the 1st vessel to sail through the Bass Strait from west to east, discovered Port Phillip and went on to help establish colonies throughout Tasmania and NSW.
One of the soldiers from the colonies that sailed on the vessel was Francis Barrallier, a man who would become an explorer in his own right, and who helped create some of the charts the voyage produced. He was later asked to find a way across the Blue Mountains that hems the city of Sydney in, and though he failed to do this he did come back with the very first evidence of the Koala. One day he noticed some aboriginal guides were preparing to cook parts of an animal they called a Colo, but he noted as a native monkey thanks to the feet he managed to procure from them. It would take a few more years for a complete specimen to be found.
In 1989, as part of the celebrations around the 200th anniversary of Europe’s colonisation of the continent a replica of the Lady Nelson that had been built for the occasion sailed for the 1st time through Tasmanian waters.
Under the care of the Tasmanian Sail Training Association, the Lady Nelson still sails today and can be hired for long and short cruises. On the weekend they also take the vessel for short tourist sails along the Derwent River, and I was lucky enough to take one of those.

Reasonably priced, the ship 1st leaves the dock under power from its engines, which drive it some way up the river. The engines are then turned off, the vessel turned about and heads back under power from its sails. The quiet of the river, the snap of canvas in the wind – this was cool!
You can help haul on a rope to set a sail or just sail along and enjoy the voyage as the crew train new members on how to sail one of the few tall ships still plying the waters today.
Another wonderful opportunity from the deck of the Lady Nelson as it sails the Derwent is the unobstructed view of Mount Wellington, and its famous Organ Pipes geological formations. These are columns of dolomite, an igneous rock that formed as Australia broke away from Antarctica- ending the ancient supercontinent of Gondwana that had existed for nearly 500 million years. 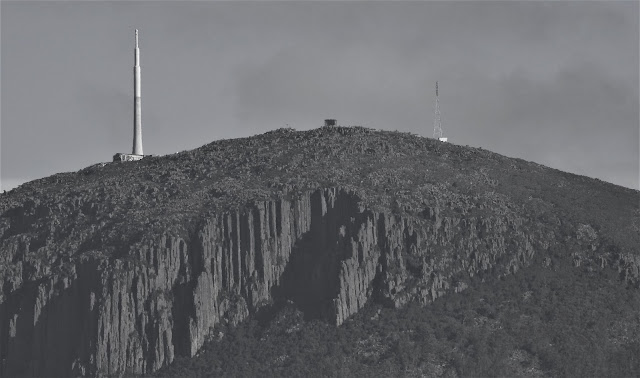 Soaring high above Australia’s 2nd oldest capital city is the evidence of its ancient, geological past. How many cities can claim that? 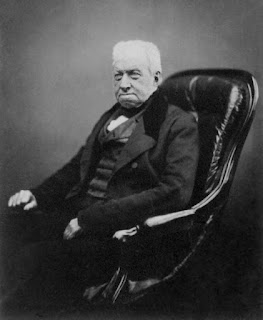 On a paleontological point, the first people recorded to have climbed Mount Wellington were George Bass and the botanist/palaeontologist, Robert Brown. Brown would describe a large number of plants and fossils from across the world, including Australia, ad many species would also be named after him.
http://www.ladynelson.org.au/ 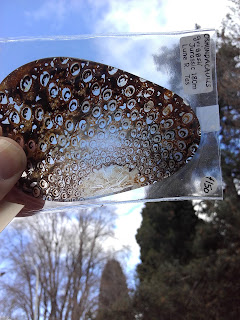 One of the famous shopping opportunities in Hobart is the Salamanca Street Markets, which run past the docks where these ships sit. For fossil collectors make sure you drop by the Lunaris Gemstones stall as they sell very nice Tasmanian fossils, such as slices of Jurassic tree fern from the Lune River formation. I picked up a nice Permian brachiopod, and my fellow fossil collector Phil C (from the previous account about our trip to the Wellington Caves) mentioned if you check out a lot of the rocks along the Salamanca Markets you can find fossils in situ. 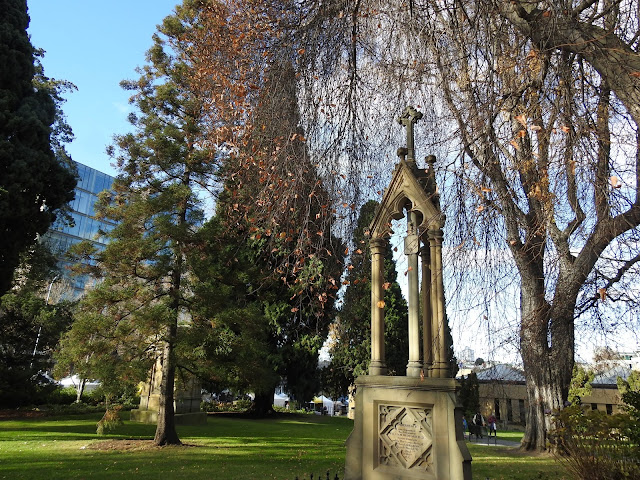 The far end of the market terminates at an English style park flanked by two carved stone lions. The park itself was formerly a cemetery that dated back to the early years of the original Hobart colony. Today most of the graves have been removed, yet a number still remain. It’s not often you can come face to face with one of the original First Fleeters who settled Sydney (and later Hobart and the failed colony on Norfolk Island), not one of the very first Europeans born in the colonies, but you can find them here. 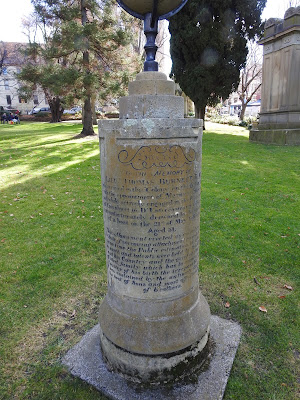 A lot of the headstones were in poor repair or had fallen after years of disinterest in the spot, so when the Hobart council purchased the land in the early 20th century and built it into the lovely park you can walk today, one full of enormous, mature trees and impressive graves. There is also a long wall that contained many of those damaged headstones, so you can walk along this sombre path and get a short snapshot of the people who helped create the city about you. 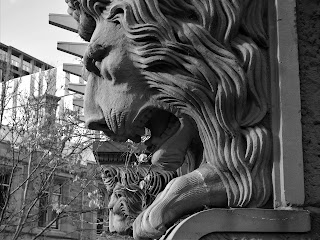 As for those stone lions, they were built by an English Stonemason who had got on the wrong side of the law and sentenced to 10 years as a convict. In Hobart he redeemed himself by returning to what he knew best, working stone, and these two stone lions were built to adorn a Hobart Bank. Funnily enough the bank’s managers blew everyone’s money (partly on their expensive building I am sure) and the financial institution crashed, the building was eventually pulled down and after some time the stone lions made their way to their current home.