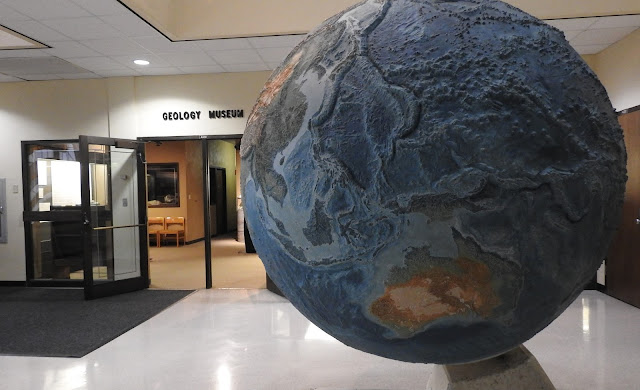 We drove from Chicago to Madison in one of the worst rain storms of the year, but this did not stop many of the people of around the university from coming out to support their football team - GO BADGERS. NOTE: Try not to visit the city when a game is on, parking can be crazy and service can be a little sporadic. 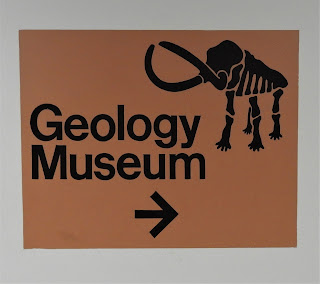 The University of Wisconsin Geology Museum itself is easy to find, but be careful entering. On what I assumed was the main road was an entrance, but this was locked and I was fearful the museum was closed because of the football game – GO BADGERS, RAH RAH RAH!
Not willing to give up so easily I entered the building’s main doors and found myself a little lost as the museum is actually part of a working wing of the university. A sign said the museum was on the second floor (in my memory), so I caught a lift up and found myself facing an indoor atrium looking down on the museum…a very empty museum. I feared the place was indeed closed…and then someone walked by underneath.
I called out to the lady how she managed to get inside. The lady I was talking too looked at me like I was a madman, as she turned out to be a visitor, and we eventually worked out how I had gone wrong. She explained, “Did you try the front door?” So, the front doors to the museum are on the inside of a courtyard, with the building having something of a U- shape. The door I had seen from the main road is something of a side entrance, and seemingly not always unlocked. 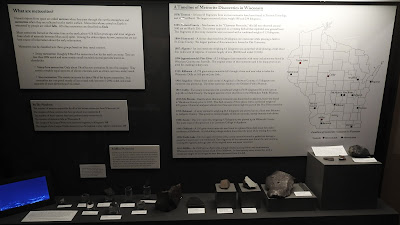 The Geology Museum (GM) is by no means the largest museum I have ever visited, but it does pack something of a punch for its size. From the oldest rocks in the world, to a number of meteorites, gems and minerals of every sort, along with a wide range of fossils, there is something for every natural history fan to see. This also means leave yourself a few hours to see the place properly, I mean you could walk through it in half an hour, but I guarantee you will miss something cool. 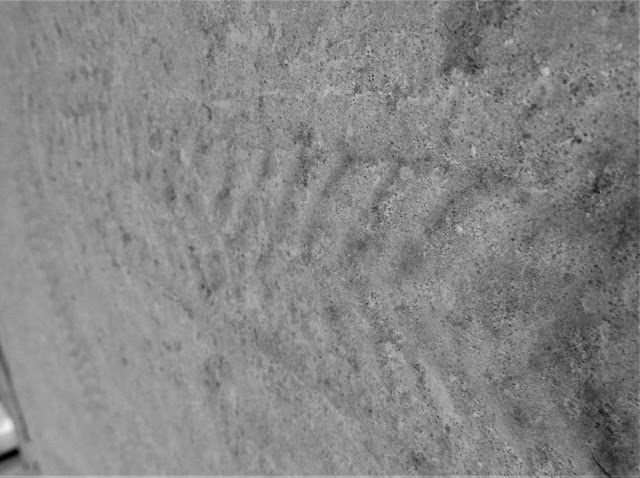 In the foyer are a number of large slabs of local rocks (Wisconsin) that contain ichnofossils of a strange, slug-like creature called Climactichnites. These were made either in newly damp sand or along a very shallow river bank during the Cambrian. 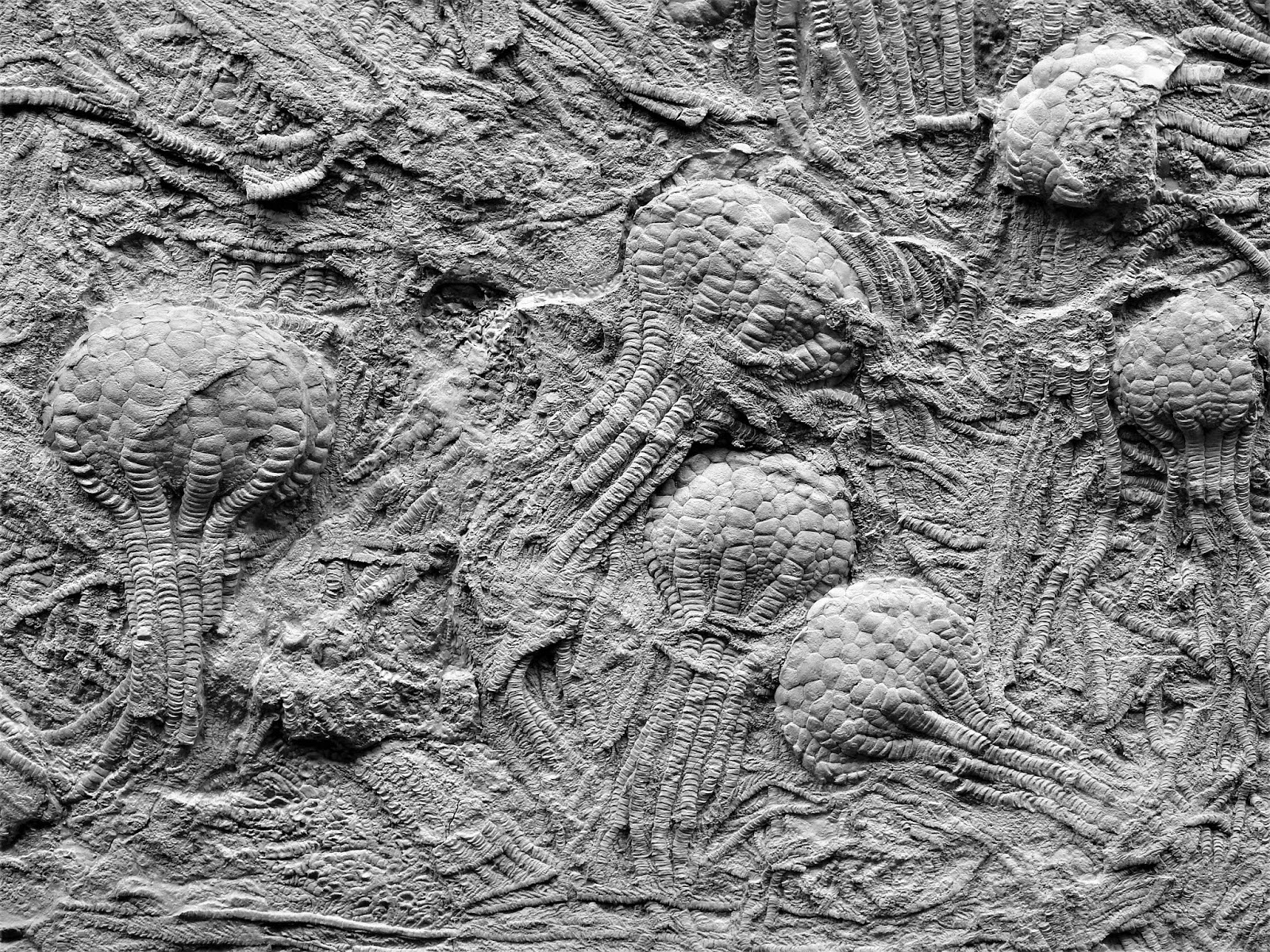 The GM has a long history, with its original display planned in the mid-1800s.  Wikipedia notes there are 66 displays inside the modern building, with nearly 1000 items on display; while the museums’ own website notes they have over 120,000 items in their collection, which is growing every year.
During my research I found a number of images of the museum over its long history. The museum has moved a number of times, and in the early half of the 20th century fell on such hard times that it looks like some of its start attractions were sold (such as a giant sloth, which sadly was nowhere in evidence). 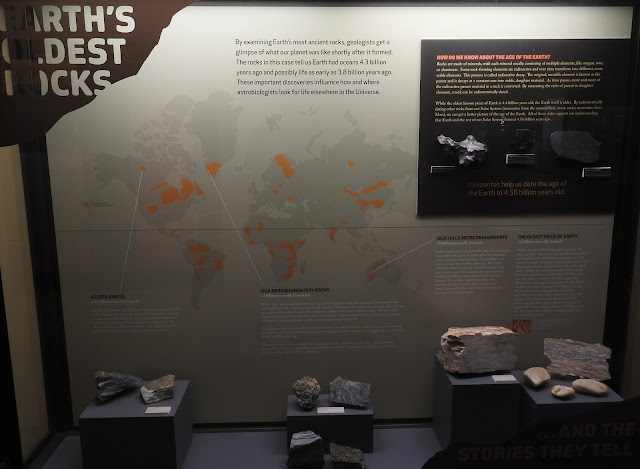 The museum itself is laid out by time and geological categorisation. You start with a number of geological cabinets, displaying everything from various igneous rocks to meteorites.
This section ends in a little limestone cave structure (with working sound effects) that you walk into. On the other side is a large fluorescent mineral display, shielded from the brighter lights of the main rooms inside the cave. Here you push a button and the lights blink out and start cycling through three different wavelengths (long and short), making various rocks fluoresce and phosphorescence at different times. 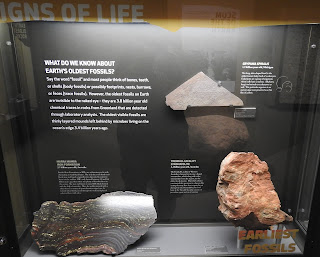 You next step into a timeline of the earth, which each display containing rocks and fossils from each time. This includes a large chunk of Jack Hills from Western Australia, containing zircon crystals, considered the oldest minerals in the world – dating back to 4.4 billion years.
Next are a series of stromatolites and a clever display of living blue green algae- the only such display I have ever seen. 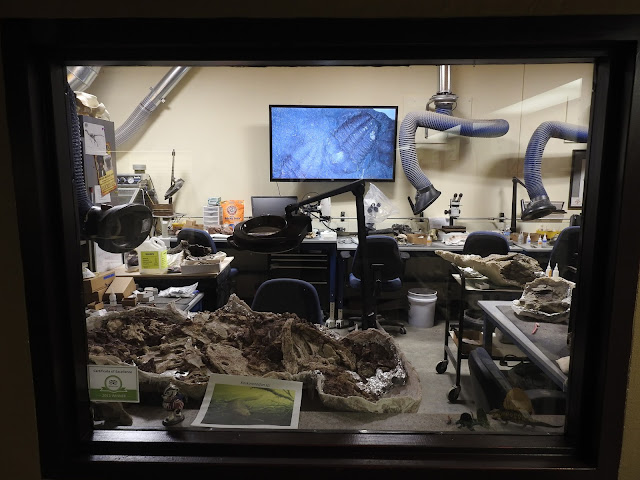 In one corner is a working preparation lab, and though no one was there as it was Saturday and the University footy team was playing – GO BADGERS - you could still look in and see a number of projects underway, including an enormous slab of amphibian fossils being prepped.
As the museum is located not that far from the Dakota Badlands, they had recently collected a number of dinosaur fossils, and at the time of my visit they were cleaning and preparing a large triceratops horn for display. 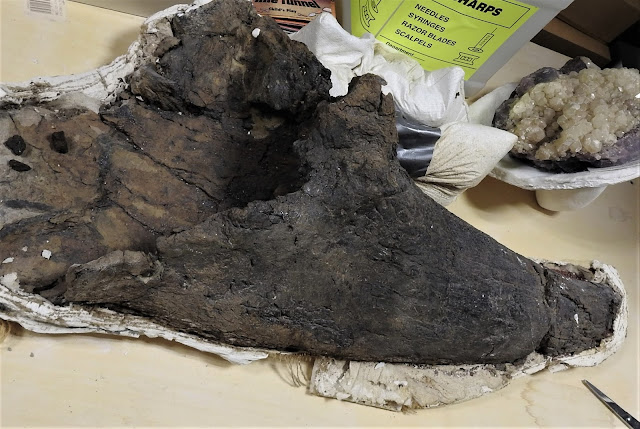 It’s clear the museum is a working teaching museum and not a full-time organisation with a staff of exhibit professionals, as most of the signs are simple, plain printed scripting. Try to not let this bother you (if indeed this sort of thing does bother you), the information is great and the items on display are often high quality and rare - there are even some real Cambrian fossils from the Burgess Shale. It is also free to enter, so what money the museum gets clearly goes into the collection. 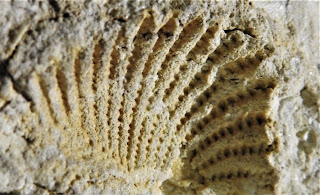 One of my favourite pieces was an enormous slab of Ordovician sea floor containing hundreds a thumb sized Trigonia shells. The detail on these fossils is amazing, and you could get right up close and personal to the slab and give it a real close eyeball. 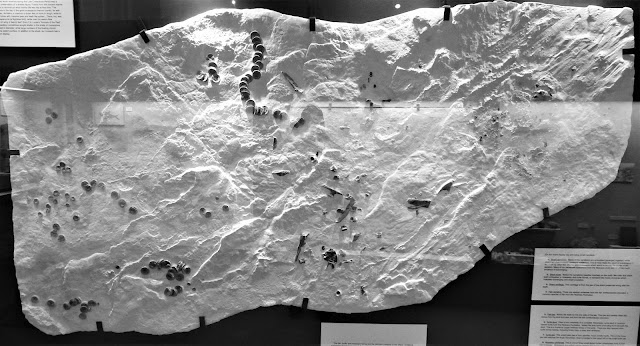 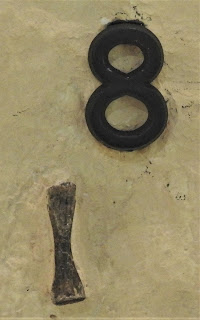 A specimen I became enamoured with was an enormous fossil Squalicorax in matrix hanging on the rea wall of the museum. This shark was found with its stomach contents intact, revealing the predator had fed on fish, other sharks, a turtle and even a mosasaur before it died. The bones are recorded as stomach contents as most have signs of acid etching from the digestive juices of the shark.
It is not always the big things that astonish either. In a cabinet on the Permian is the articulated skeleton of a tiny reptile called Captorhinus. First named by E D Cope in the 1880s, these were likely amongst the smallest reptile predators of the age - making the minuscule, fragile little skeleton a true treasure. Seriously, some of the rib bones are so thin it felt they would snap if you even breathed on them.

After the winding path through the Palaeozoic cabinets you enter the final large display room. Here are the Mesozoic and Cainozoic specimens…though it might be better to call this the room with the real big stuff. 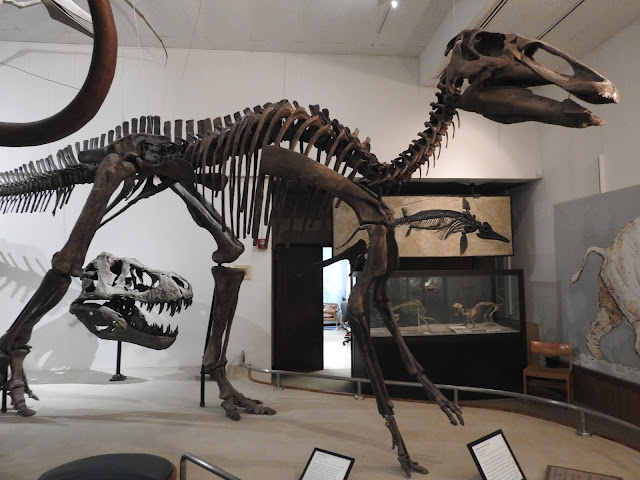 There is a real Edmontosaurus, a composite skeleton that is reportedly the first dinosaur displayed in the state. 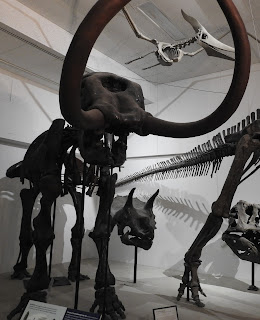 The museum highlight is the Boaz Mastodon (named Old Nic), unearthed during a rainstorm in 1897 by the Dosch children on their family farm. News of this discovery soon spread, and the family farm became a hotspot for an interested public, who visited in large numbers to view the enormous bones. A few years later Frank Burnham, a Wisconsin attorney and member of the state legislature, organised the sale of the bones for fifty dollars to the state. The fossils ended up at the UWGM, where they were cleaned, catalogued and put on display in 1915. Roughly half the skeleton is real material.
Unearthed with the Boaz Mastodon was a quartz arrowhead, possibly the cause of the animal’s death - which was not part of the sale. Years later an envelope arrived at the museum with a spear point and note, explaining this was the artefact that had been found with the ‘U.W. elephant’. Both Dosch brothers would be shown the spear point in 1962, and they admitted it looked like the one they had found over 60 years earlier. This is on display in a cabinet opposite the fossil. 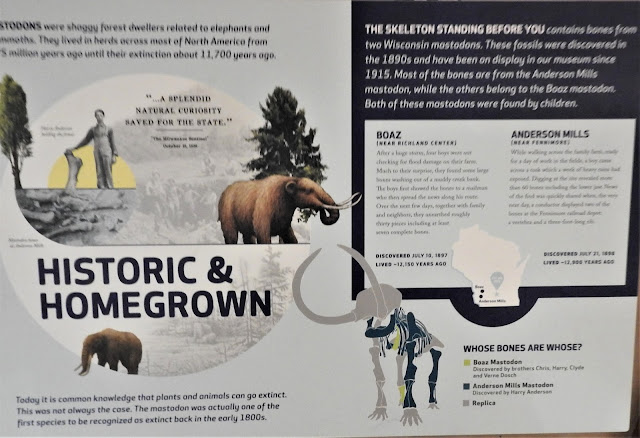 Reading the nearby sign, however, it seems there is a different story to this specimen. Only two bones are actually from the Boaz Mastodon, the rest belongs to the Anderson Hills Mastodon, also found by children exactly one year later. 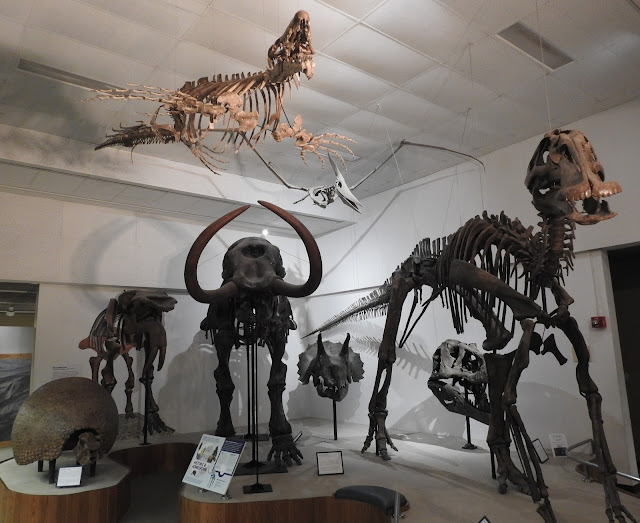 The display of really big things also contains the skulls of a T.rex (called Stan), a Triceratops (not Stan), a Deinotherium (Could have been called Stan to his mates), a soaring Pteranodon (Pstan?) and finally a Glyptodon (perhaps called Stan, which I have discovered is also a Spanish name). 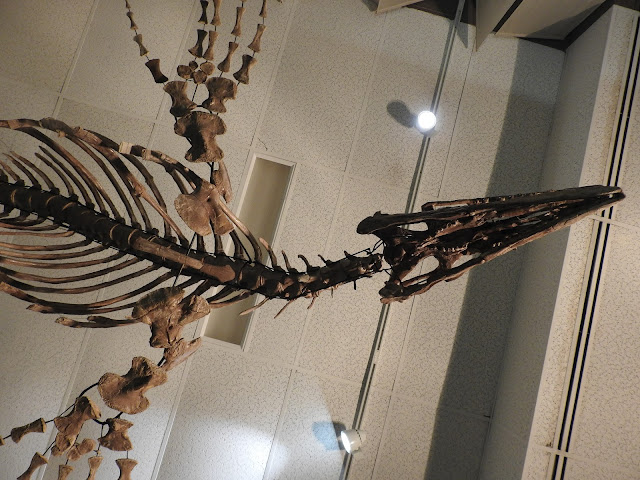 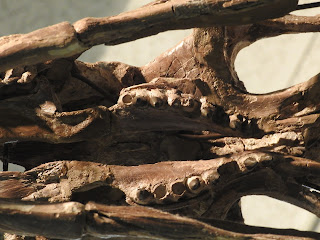 Swimming overhead is a near complete mosasaur, and one of the most impressive things about this is that you can get directly under the skull and look up. Clear as day are visible the secondary palate teeth, often missing or unseen when a skull is closed or still in matrix. These teeth are still retained in the most primitive snakes today.
One of the last specimens to see as you start moving towards the exit is Archaeotherium - teeth bared to show how dangerous this pig from hell would have been. It’s a great way to end your visit as these are some of the most spectacular mammal fossils the US has to offer. 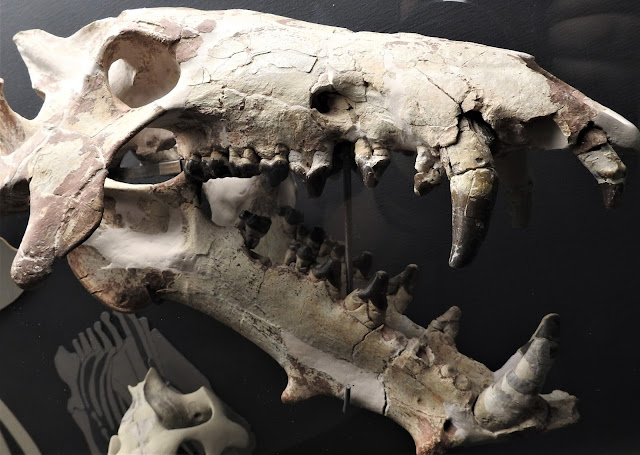 NOTE: While I was there I chatted with the staff, specifically one of the Universities professors of geology, an extremely nice man whose name I am horrified to say I cannot recall. I always take notes on my visits but this note was ruined in the rain, and sadly is nothing more than a smudge. If anyone at the museum knows the gentleman I am talking about, please let me know as I would like to thank him for his time. He showed me the prep room and even let me hold a T.rex mandible, which was a true treat. 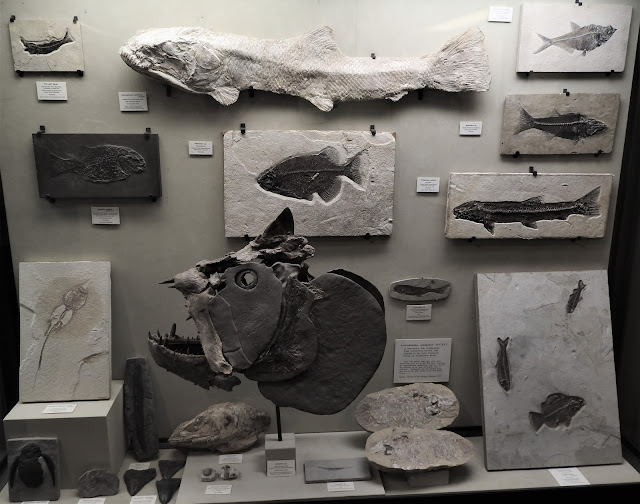