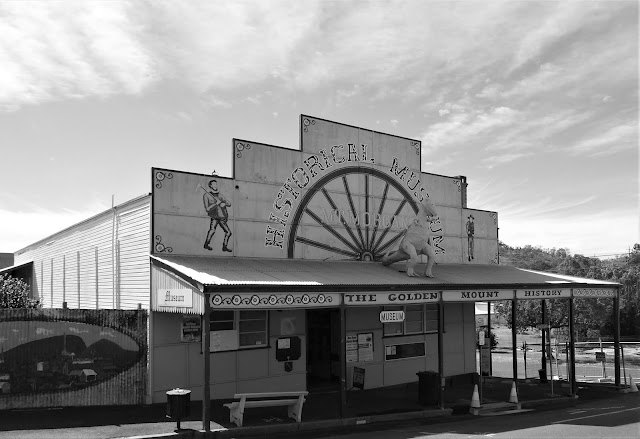 I was recently lucky enough to head into Central Queensland – a region long connected to Australian palaeontology. From the fossil rich and award-winning Capricorn Caves (more on them later) to the world famous Winton fossil fields, this region has a lot on offer for a paleo fans.


Just outside the city of Rockhampton is Mount Morgan – a remote village sitting along the Dee River with a very interesting secret (though not a secret to the locals). Though once prosperous thanks to the local Mount Morgan mine – which produced among other minerals gold and copper – the closing off the mine hindered the town, which is now looking to use its history to draw in tourists, and the jewel of the town is The Mount Morgan Historical Museum. 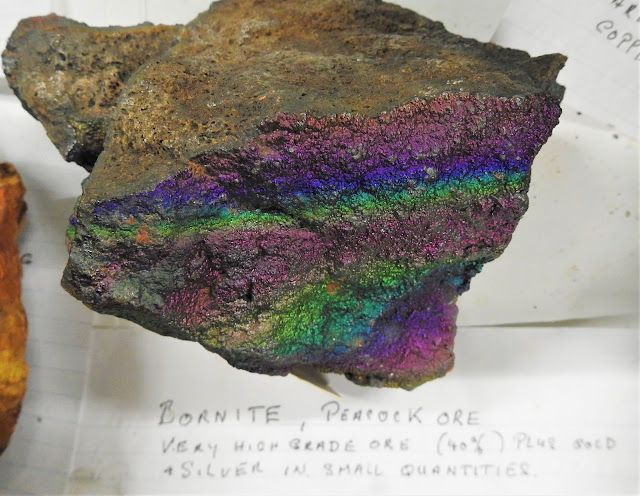 “Housing an impressive collection of relics from the town's earliest years to the present, the Mount Morgan Historical Museum delves into the captivating history of Mount Morgan. 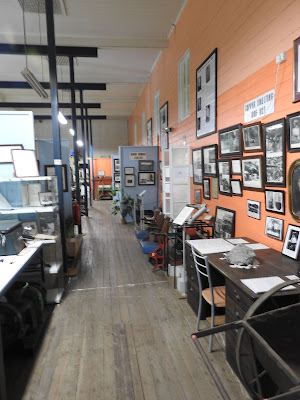 Among the extensive range, displays include mining equipment, historic household and business objects, and an extensive photographic display; taking you through the years of Mount Morgan life, and presenting the faces and stories of some of the town’s most prominent individuals.
The fascination continues with the Museum’s fine collection of horse-drawn buggies and wagons, along with the first motor hearse in Mount Morgan (a 1921 Buick) and a 1942 International Fire Engine. 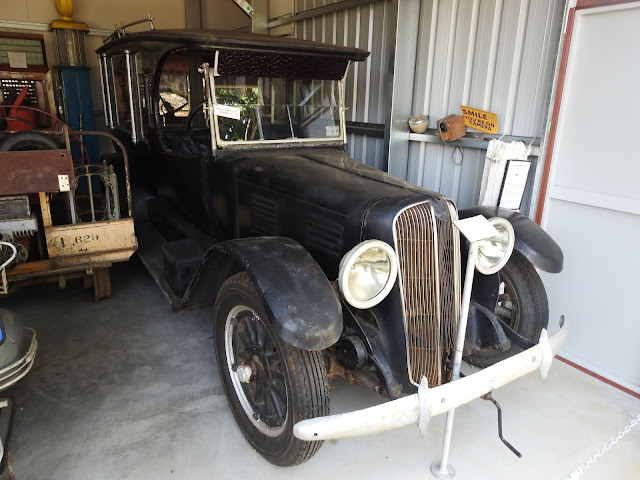 Part of the unique display also includes the Museum and Gallery Achievement Award winning exhibit Mount Morgan Murri. Telling a fine example of the history of the local Indigenous community, Mount Morgan Murri features a variety of artefacts, interpretation panels, stories and photographs recovered from around the local area. 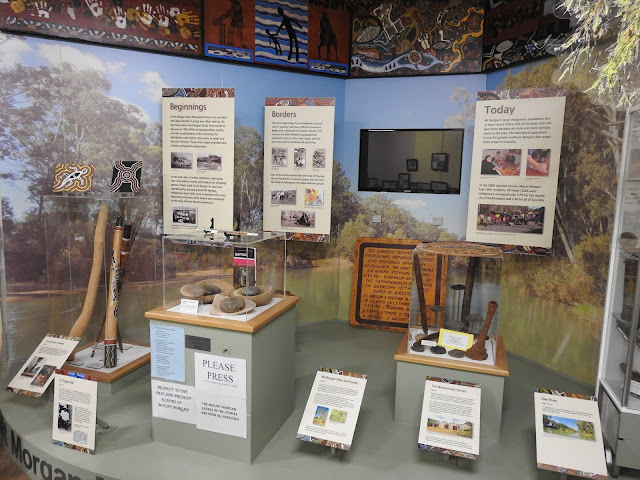 The collection also includes local Indigenous artwork and an audio visual display of photographs and voiceovers - presented by members of the Mount Morgan community.” 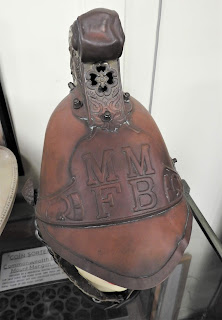 There is a lot on display here, from everyday implements used over the last century or so to specimens of the minerals once dug out of the ground there. What was of great interest though was the palaeontology specimens.

It turns out the mine produced a lot more than gold and copper. The mine is mostly situated in Jurassic age rocks, and these have produced several fossils, both marine and terrestrial – and many of these are on display at the museum. 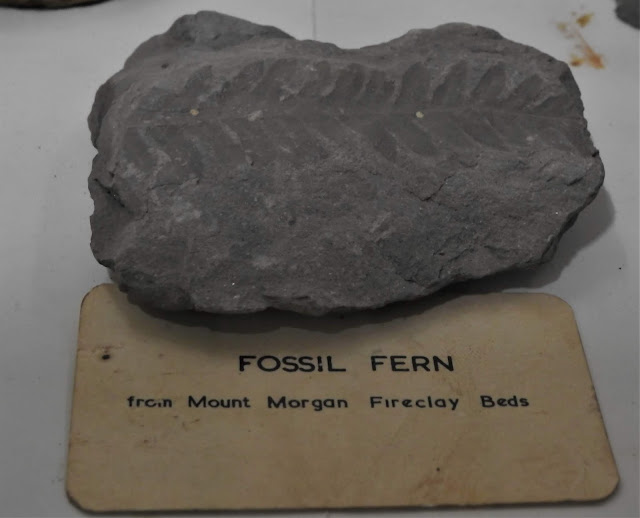 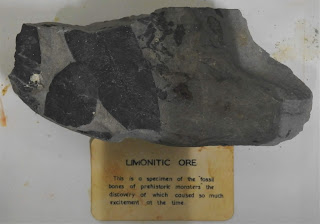 There are a number of plant fossils on display, but the real jewels are the plesiosaur fossils. These marine reptiles with strangely long necks have been found elsewhere in Australia, but their appearance in dusty Queensland is a stark reminder that this part of the world used to site alongside a large interior sea. 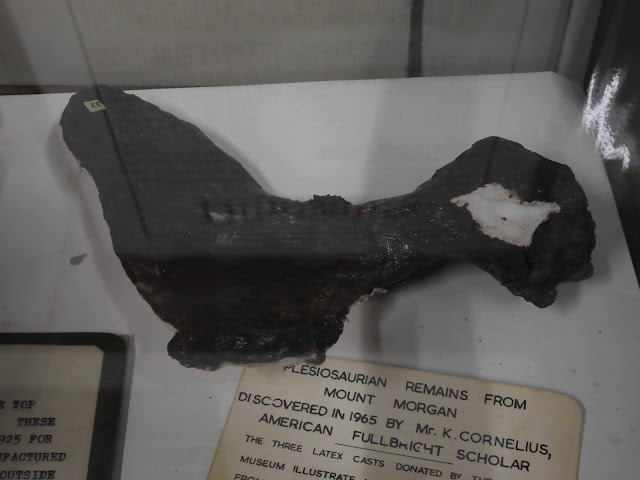 Now the plesiosaur fossils are replicas as the real ones are part of the Queensland Museum collection and helping palaeontologist unravel the bizarre history for the country, but I loved seeing them as they were an unusual find in a museum where I was not expecting to see anything so cool. 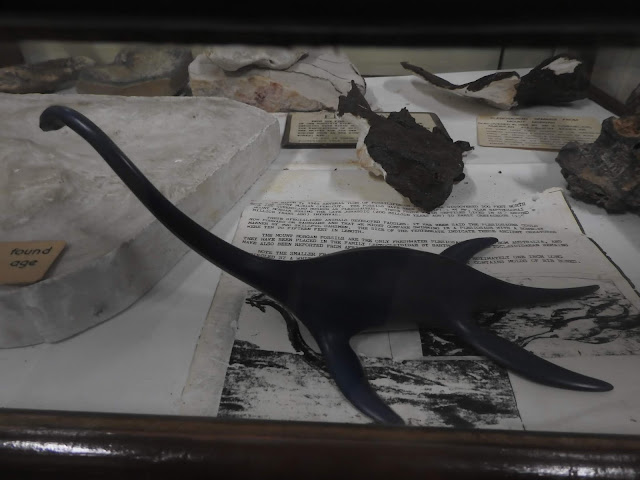 BUT – what came next was shocking. It would seem the Mount Morgan mine contains a treasure potentially far more valuable than gold or copper. Running along the roof of the mine are over 300 dinosaur footprints – revealing what sort of creatures once walked alongside this ancient sea.  Dating back to the early Jurassic – a time there are very few fossils from anywhere in the world – these trackways are one of the most important dinosaurs finds on the continent – and I had never heard of them. 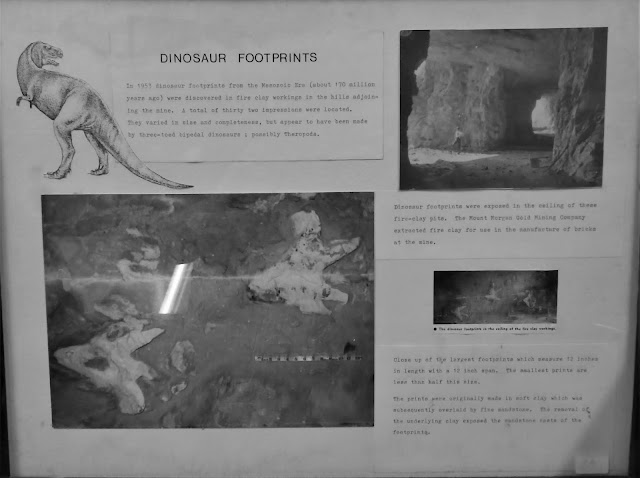 One reason for this was the closure of the mine. Though the footprints were famous in the region and locals ran tours into the caverns to see these prints – a collapse meant the tunnels became too dangerous and the mine was closed. 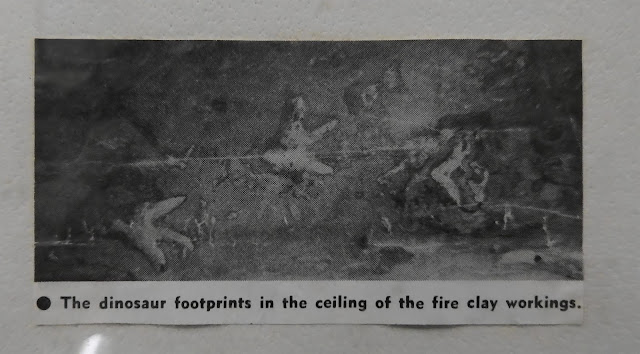 Recently there has been a push by local governments to have surveys done of the mine and for any safety measures needed to keep visitors safe to be installed, but for some reason the state government has shied away from agreeing to this – creating some political unrest in the region. Hopefully the collapse has not occurred to the fossil roof, parts of which hang 8m above the tunnel floor, and access can so be granted to this treasure again.
This is why I have called this part one – as I am hoping one day to get a tour of these footprints and will cover them in a future article – but for now you can see casts of some of these prints at the Mount Morgan Historical Museum. 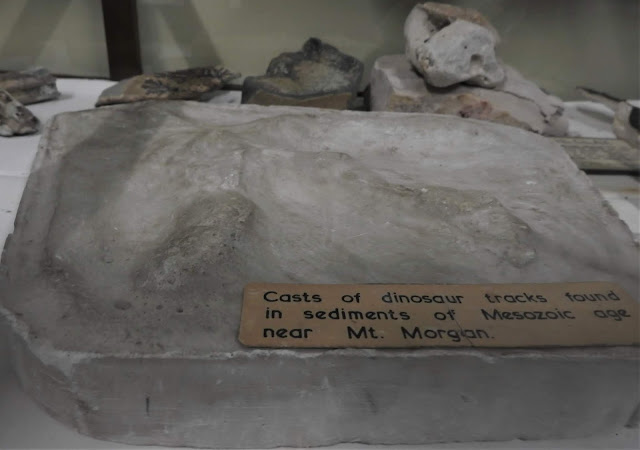 Recognised species amongst the footprints are
Anomoepus: First recognised in the Connecticut River Valley, Massachusetts, in 1802. E.B. Hitchcock described the footprints as evidence of ancient birds, thought today they are identified as  belonging to a dinosaur – most likely an ornithischian. Similar prints have been found in West Australia, Poland and the Czech Republic.
Grallator: these three toed prints have been found across the globe, and likely belonged to a small predatory dinosaur like Coelophysis. These too were originally named by Hitchcock. 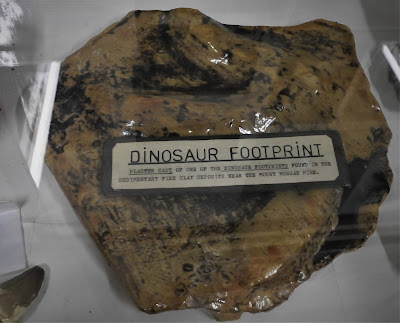 Eubrontes: Hitchcock looked at the sheer size of these much large prints and felt they came from a truly enormous animal that must have shaken the ground as it stopped around – thus he named the ‘true thunderer’. These likely belonged to the largest land animals of their day – the herbivorous prosauropods or perhaps even early sauropods. The prosauropod is more likely though as there was a prosauropod found in northern Queensland – though the true origins of this specimen are still being hotly debated (and an article for another time). 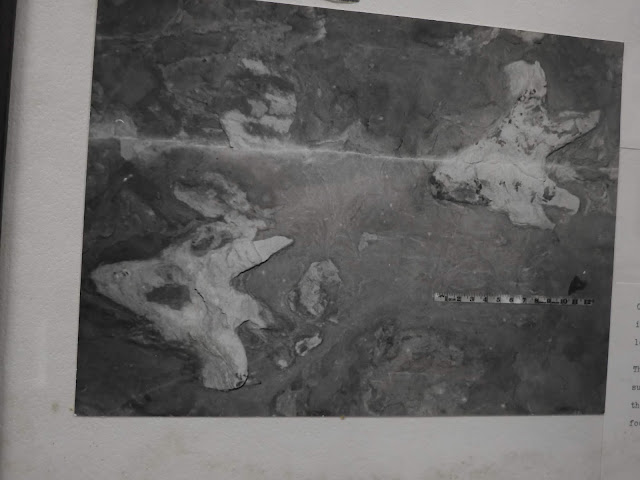 Skartopus: known from the world famous trackway at Lark Quarry, the Age of Dinosaurs website noted:  “They are typically described as being longer than they are wide, symmetrical and sharp toed. They are small three toed theropod footprints about 2–5cm long, representing dinosaurs 13–22cm tall at the hips… Mt Morgan has produced a single Skartopus footprint which, at 5cm long, likely represents a theropod 22cm tall (brush turkey-sized).” 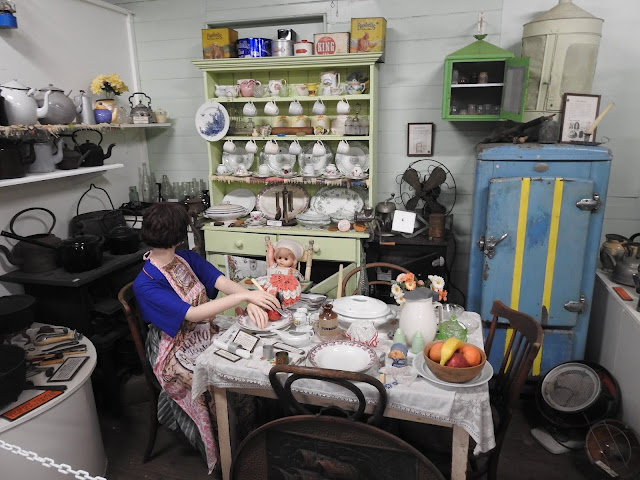 So in summary - I enjoyed my visit to the Mount Morgan Historical Museum - it had some great exhibits and it was a joy to find a paleontology display in a place I was not expecting to see one...ohhh....and there's a dinosaur on the roof! 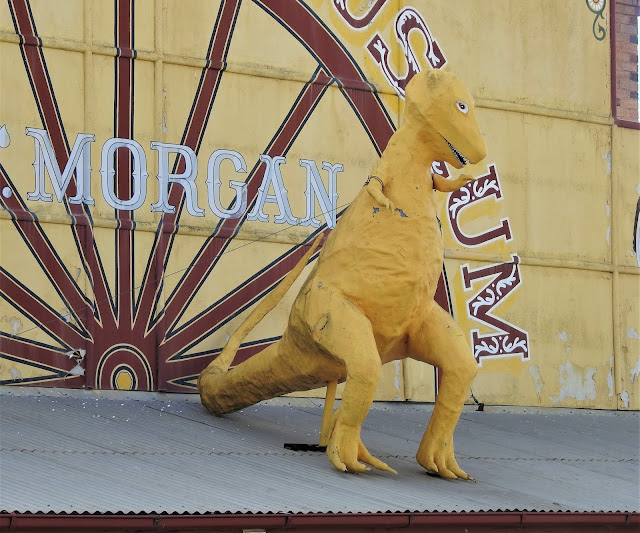