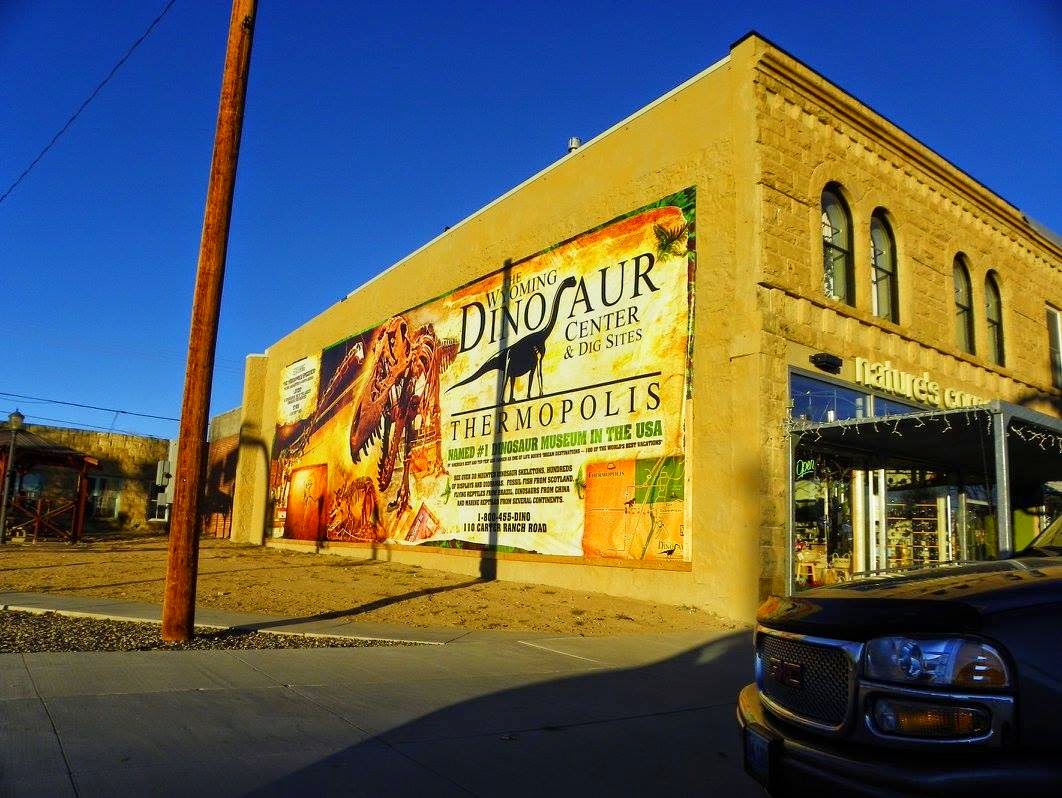 Near the centre of Wyoming, nestled along the Bighorn River is the small town of Thermopolis, and in the middle of Thermopolis is the Wyoming Dinosaur Center. 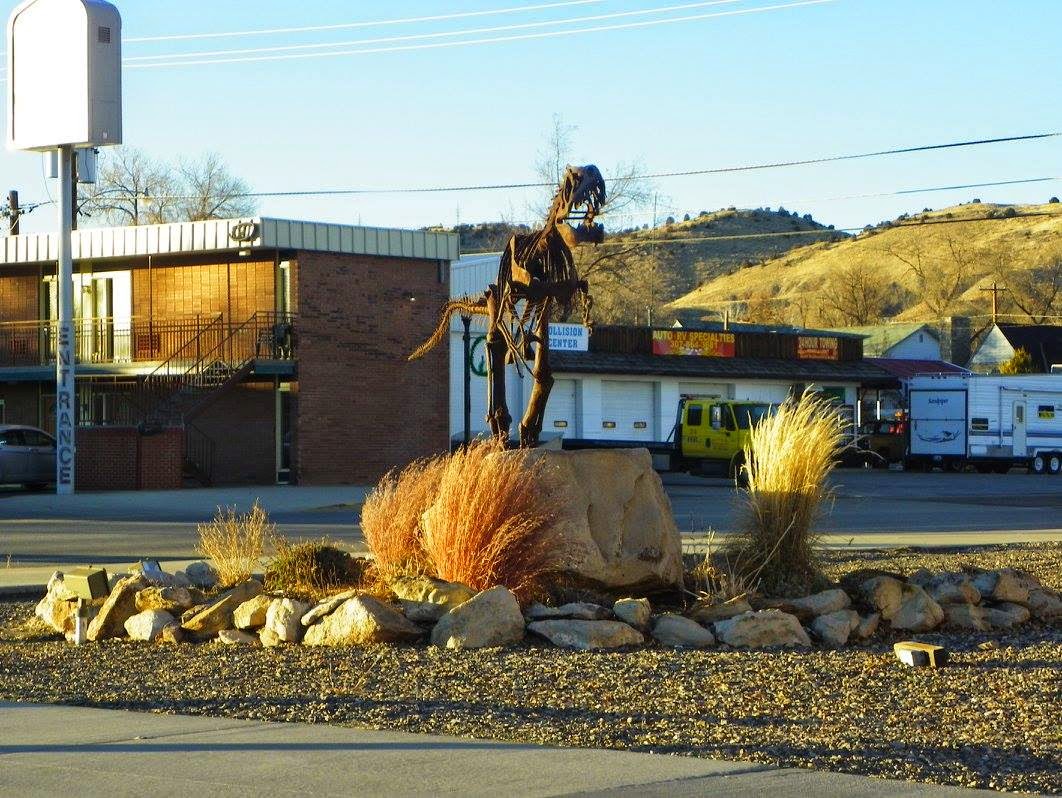 Driving into town you certainly get the feeling Thermopolis knows it’s on to a great thing as hints about the museum are everywhere. When I say ‘hints’, there’s a dinosaur statue along the main road and dinosaur signs everywhere. 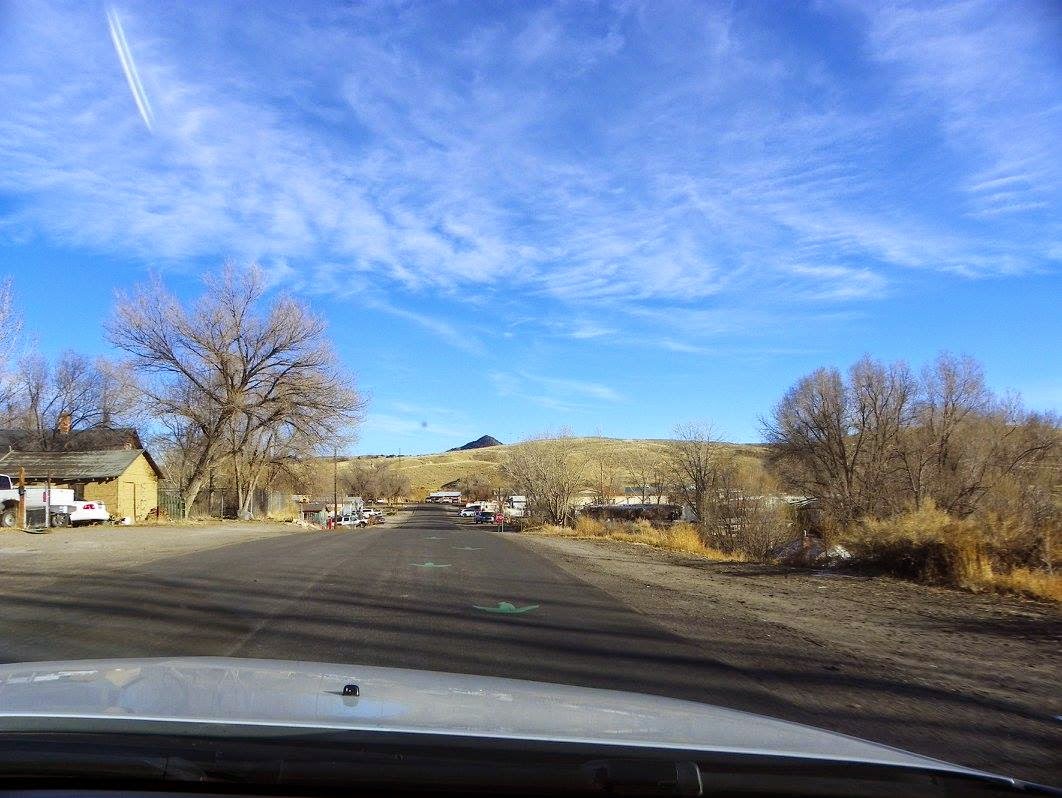 My favourite thing is the subtle giant green dinosaur footprints stomping along the road to the museum’s front door…genius. 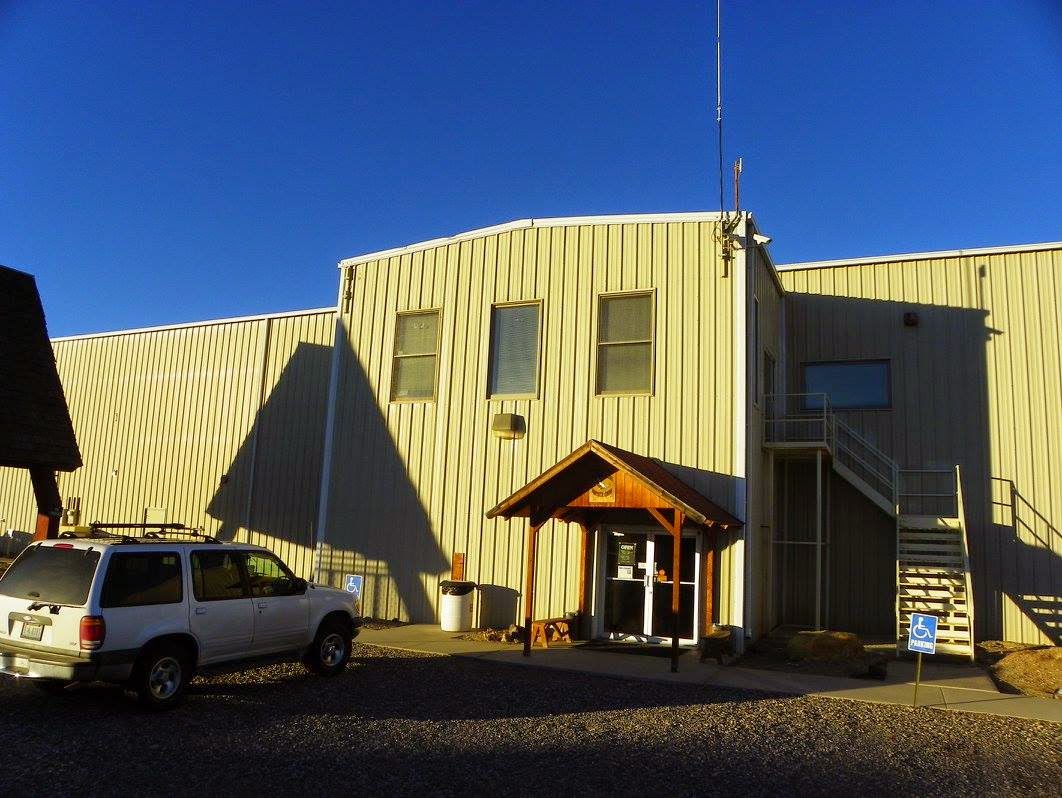 Driving around the museum I have to say it doesn’t look like much from the outside, unless large airplane hangars are your thing- in fact that’s probably the official design of the building because the treasures inside certainly need a lot of space.


I work at another dinosaur museum that resembles this one in many ways. It’s mostly a single room that people get to walk around in, so I truly appreciate the layout of the display. 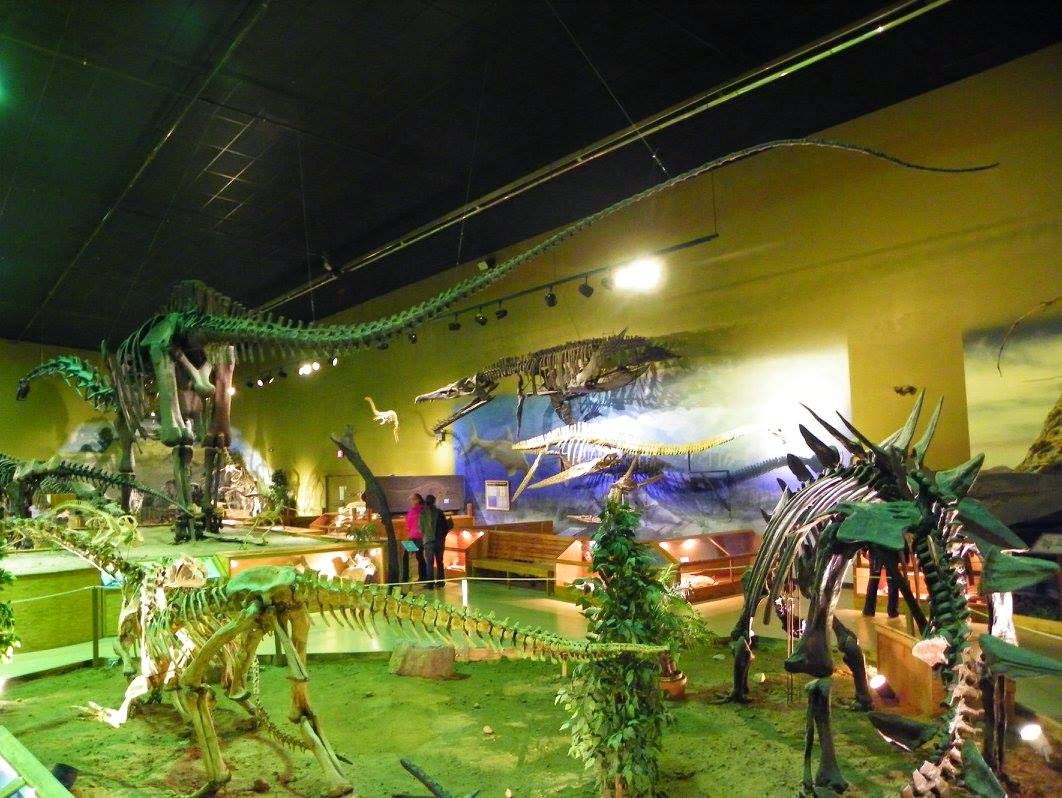 The dinosaurs are so large they create galleries, with each as spectacular as the next, so you find yourself looking in awe at one beast, only to turn about or walk a few steps to find yourself face to face with something else equally as inspiring. I really liked this museum.

Amongst the specimens on display is the first ever Albertaceratops... 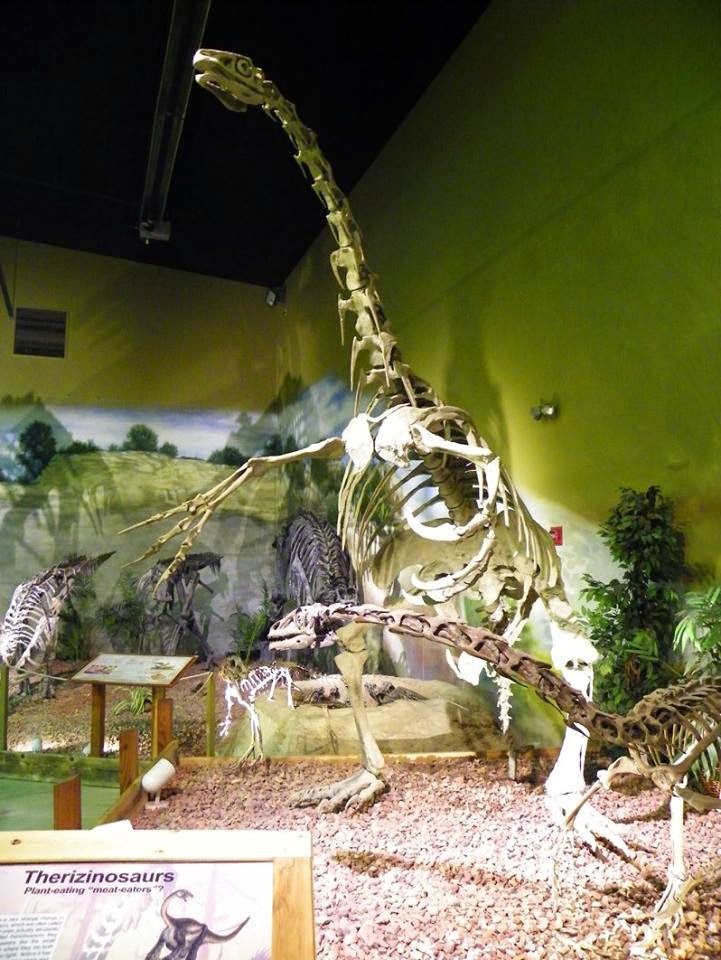 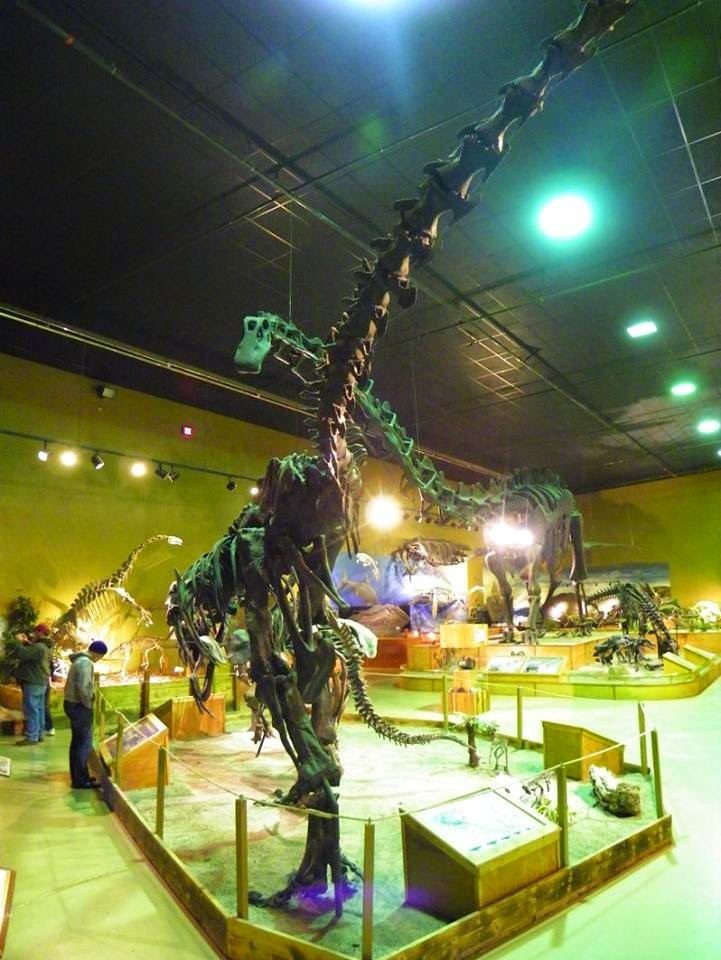 ...and a T. rex skeleton (Stan I do believe) attacking a Triceratops.

Along one wall are a number of ichthyosaurs, a long-necked elasmosaur and a pliosaur. 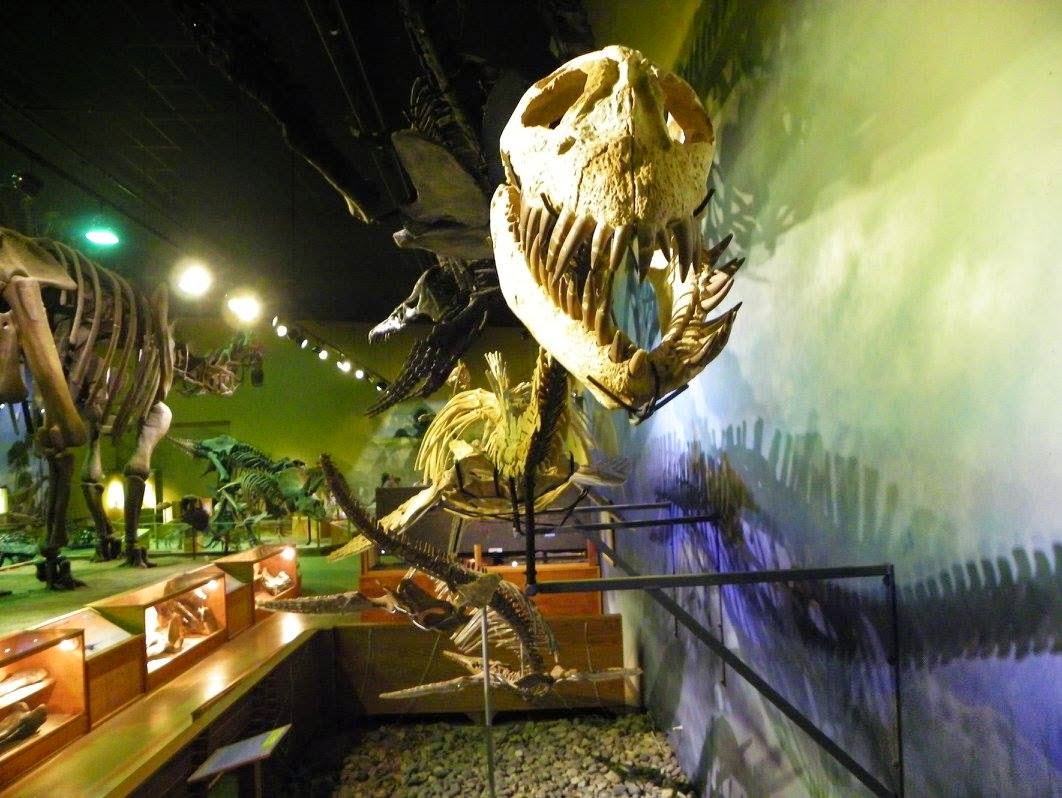 There are local species such as Maiasaura feeding a nest of hatchlings... 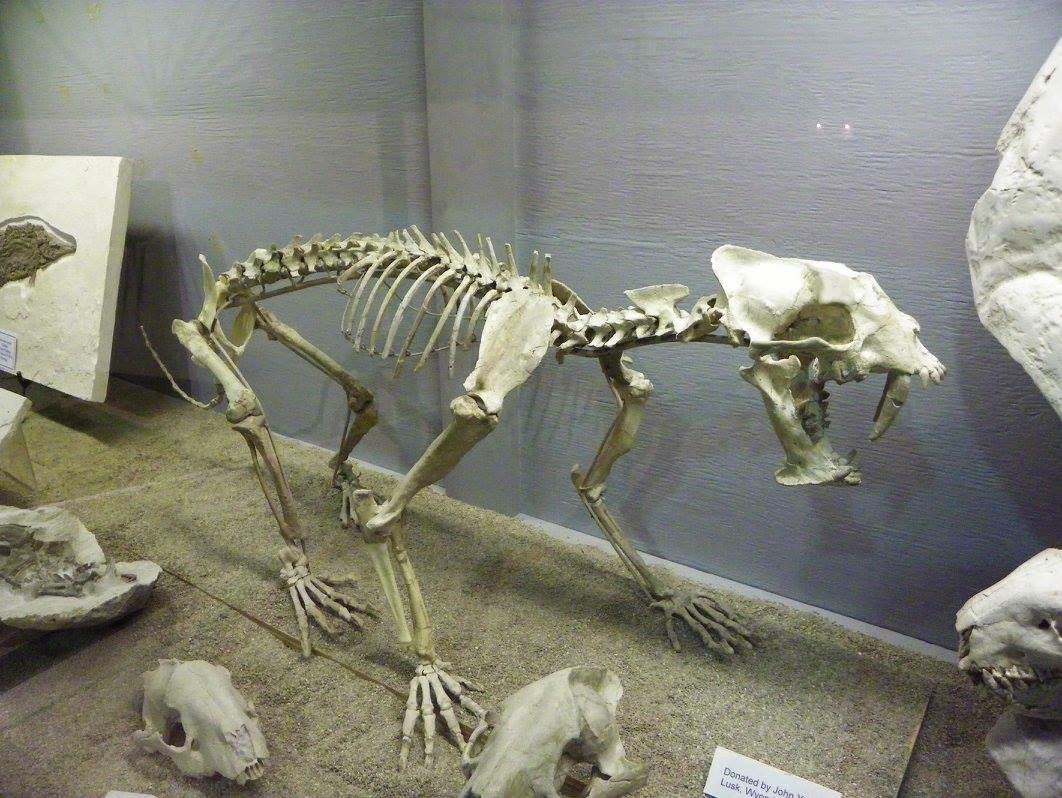 ...and the small saber-tooth cat, Dinictis

There is a wonderful Asian display containing specimens such as a sprinting Velociraptor turning on a Protoceratops, a Tuojiangosaurus and a fearsome Monolophosaurus attacking the incredibly tiny sauropod, Bellusaurus. 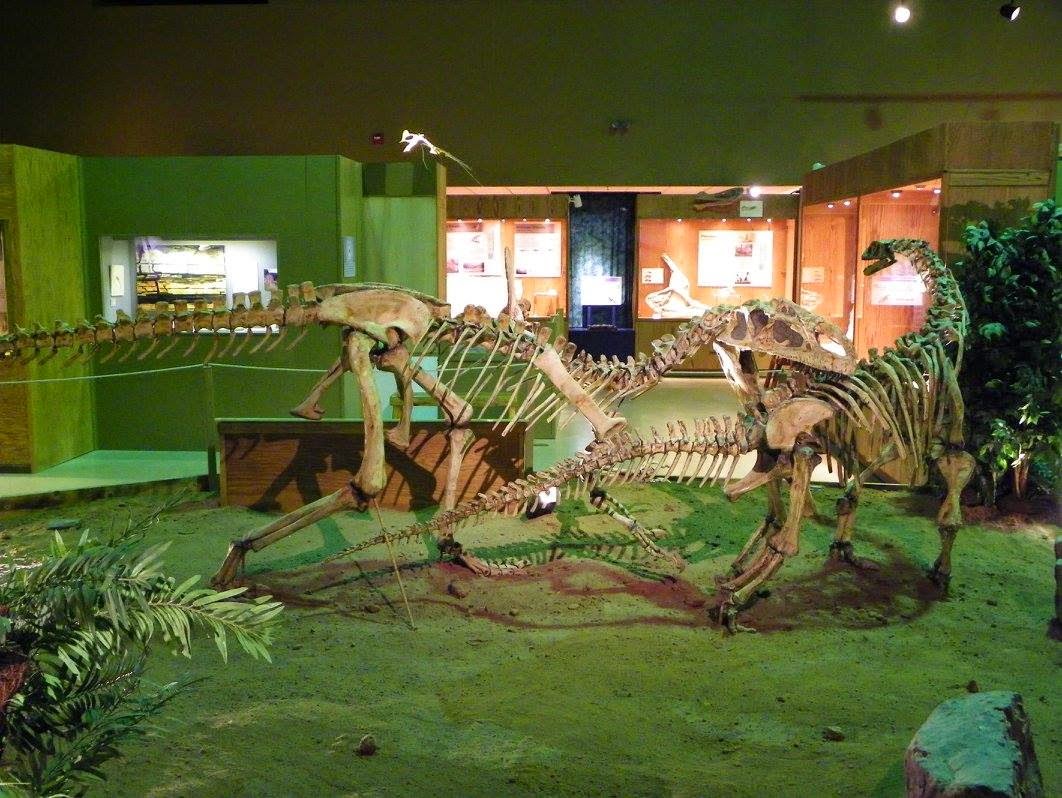 There are the standard species, Coelophysis, along with extremely rare species such as ‘Jimbo the Supersaurus’- an enormous 106ft sauropod that dominates the middle of the display and is the reason for the size of the building. 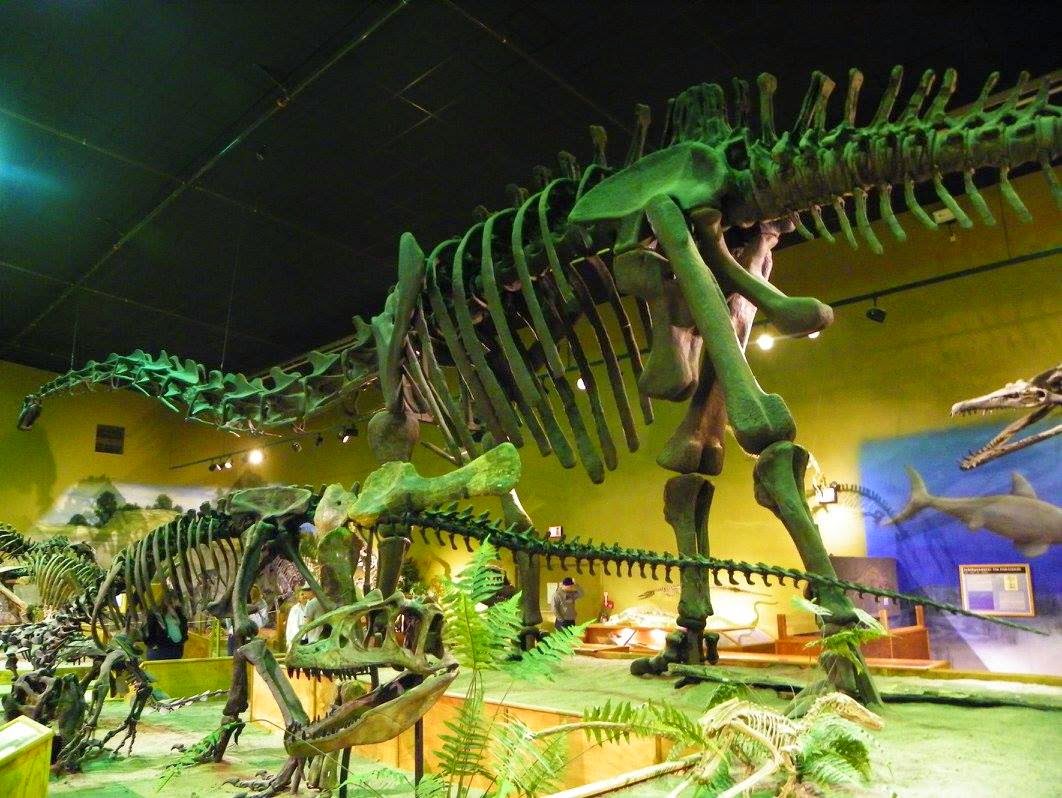 This thing is huge (one of the largest sauropods ever mounted), and even better you get to walk around it, a 360 degree view, and you even get to see it standing by some of the larger predators and see just how tiny they were in comparison. 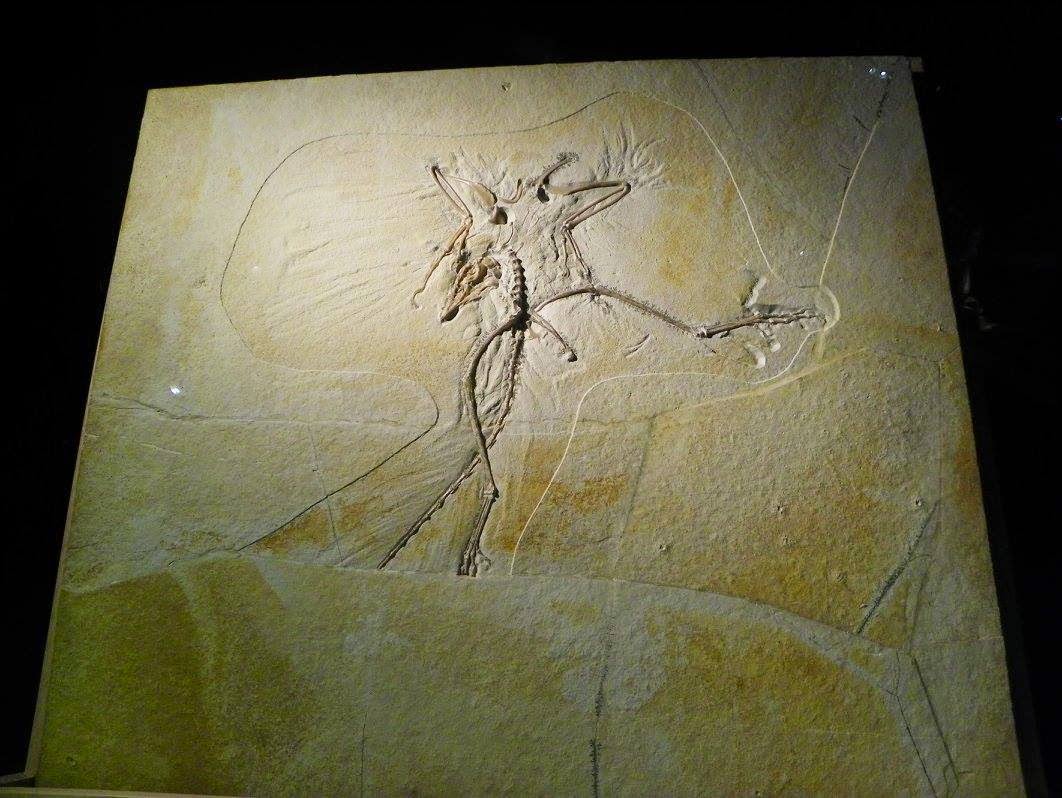 Just as spectacular and important is one of the museums smallest specimens, the Thermopolis Archaeopteryx. As far as I know this is the only actually specimen of this iconic species in the US, and I’m proud to say the 3rd one I have seen after the Berlin and London specimens. 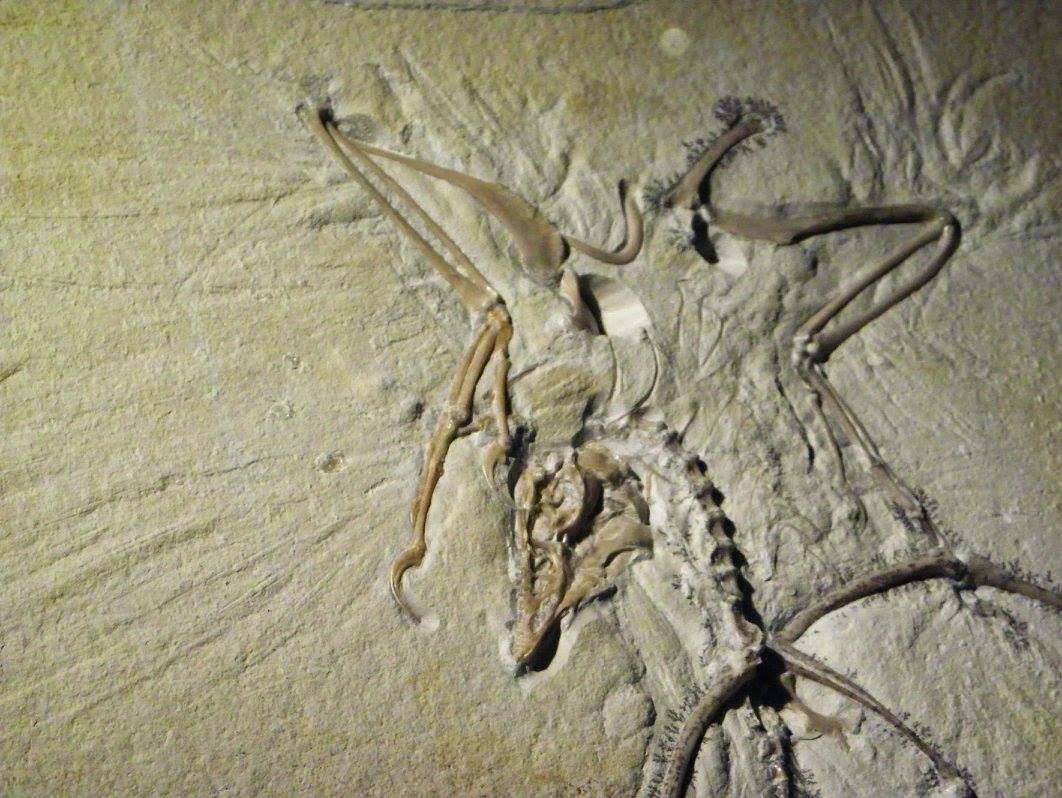 This one is not behind bulletproof glass like the others and you can get rather close to it. The lighting also makes it easy to see the fossil in detail. 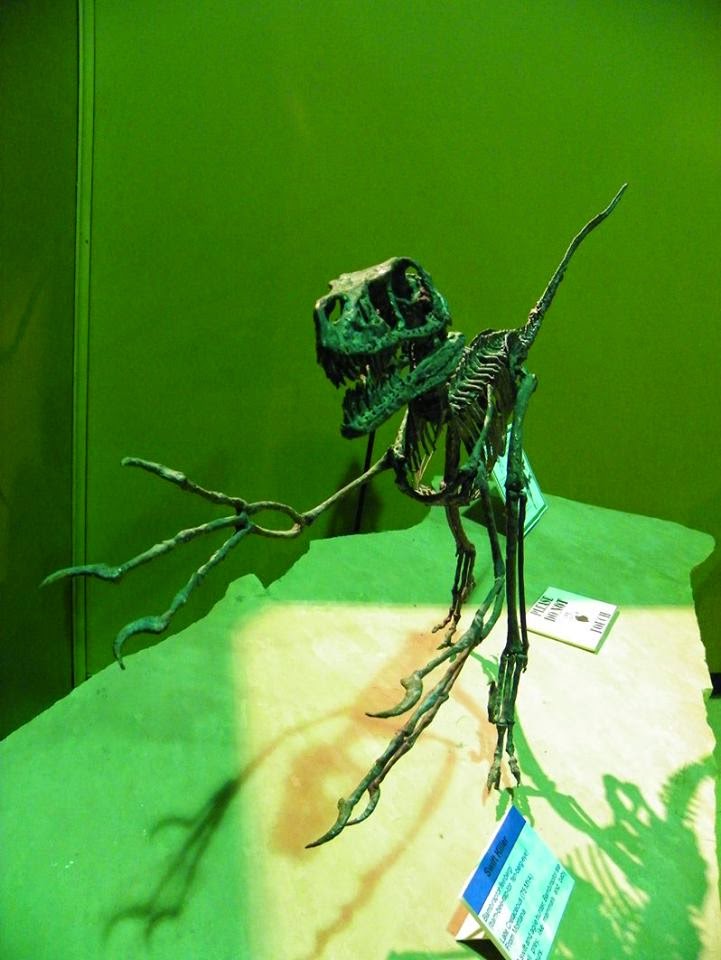 Another great specimen is Bambiraptor, the first I have seen in all the museums I have ever visited.

Wyoming is of course a hotbed for dinosaur fossils and there are a number of operating quarries near the museum where specimens are collected for preparation. 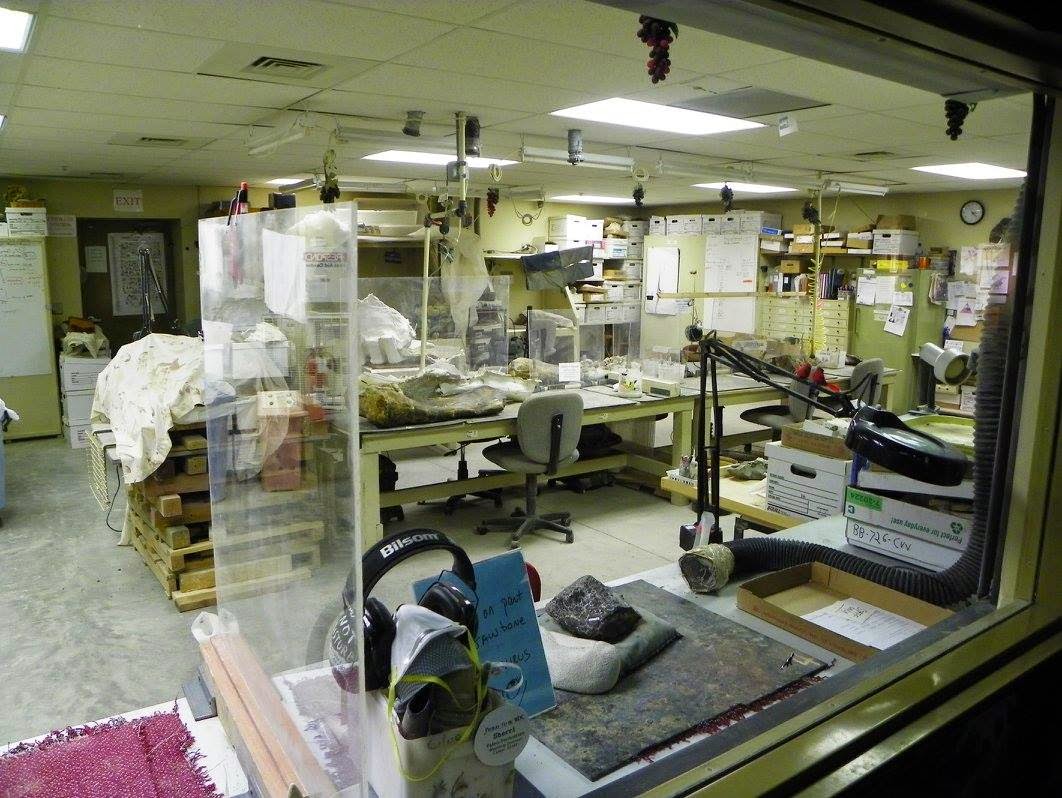 One corner of the display has a large window through which you can watch people preparing fossils. 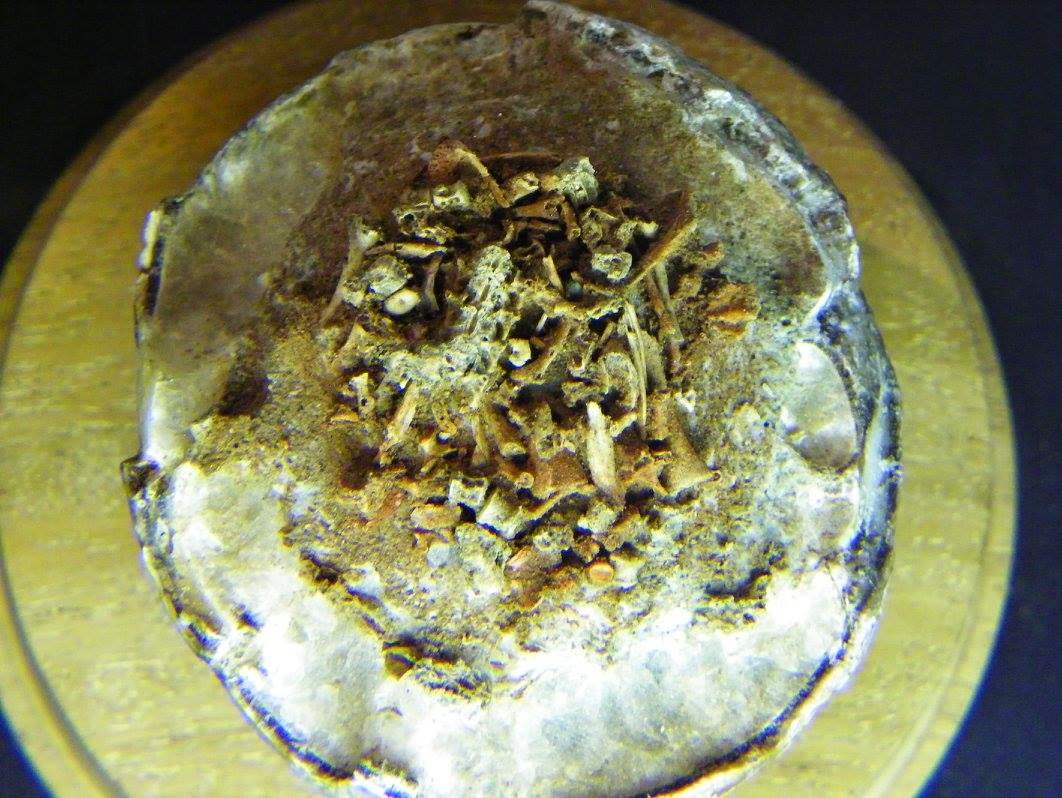 When I was there they were working on a new Camarasaurus.
The museum also runs digs that the general public can join in for a fee, also there’s an opportunity for people to help prepare fossils and for students to do courses, which I believe end with university credits. 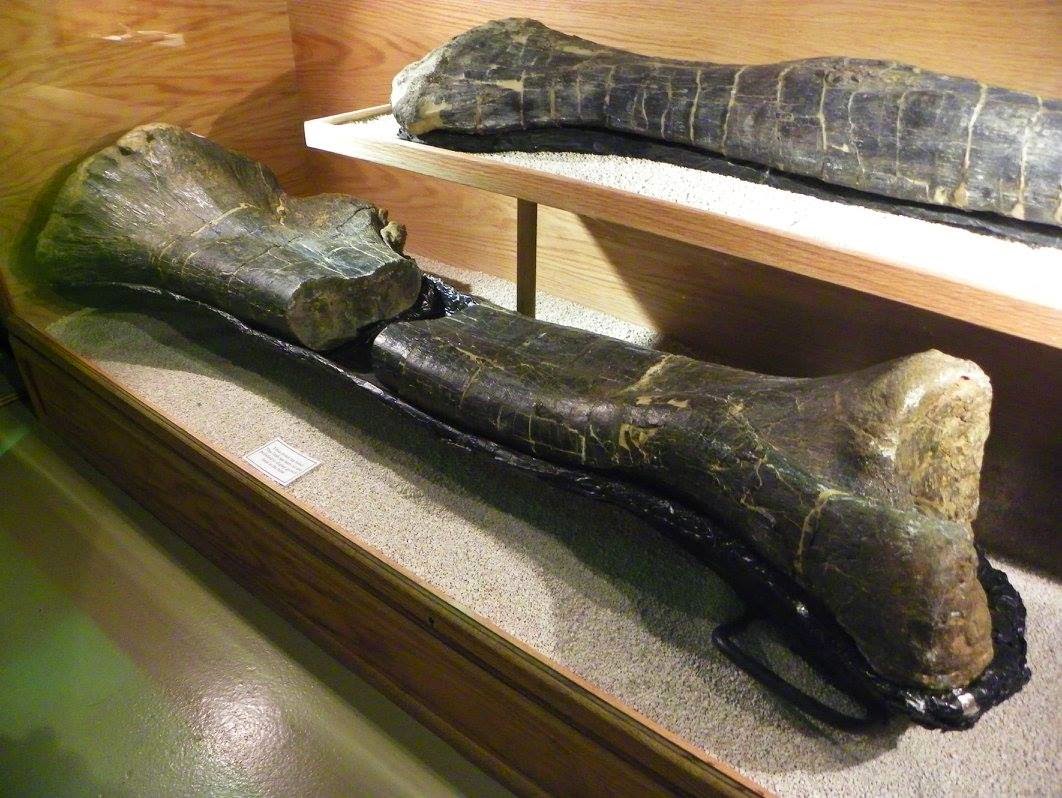 The museum is open 7 days a week, from 10-5, and is closed on some holidays. The price also varies during different seasons, so for opening hours and daily entry I suggest you check the museum’s website if you’re headed that way.
http://www.wyodino.org/admission/

The sun sets early during winter in this part of the world and we had a long way to drive to our hotel, so after a quick look in the shop we were back on the road, leaving behind a museum full of some of the world’s most important fossils. 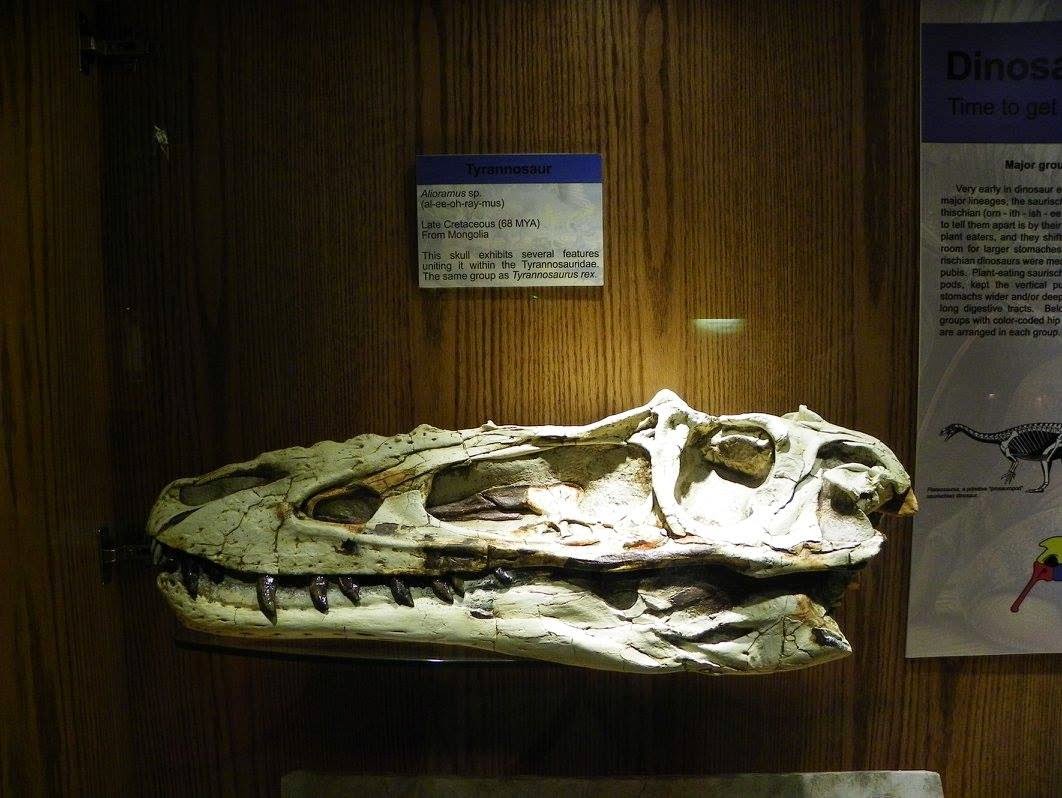 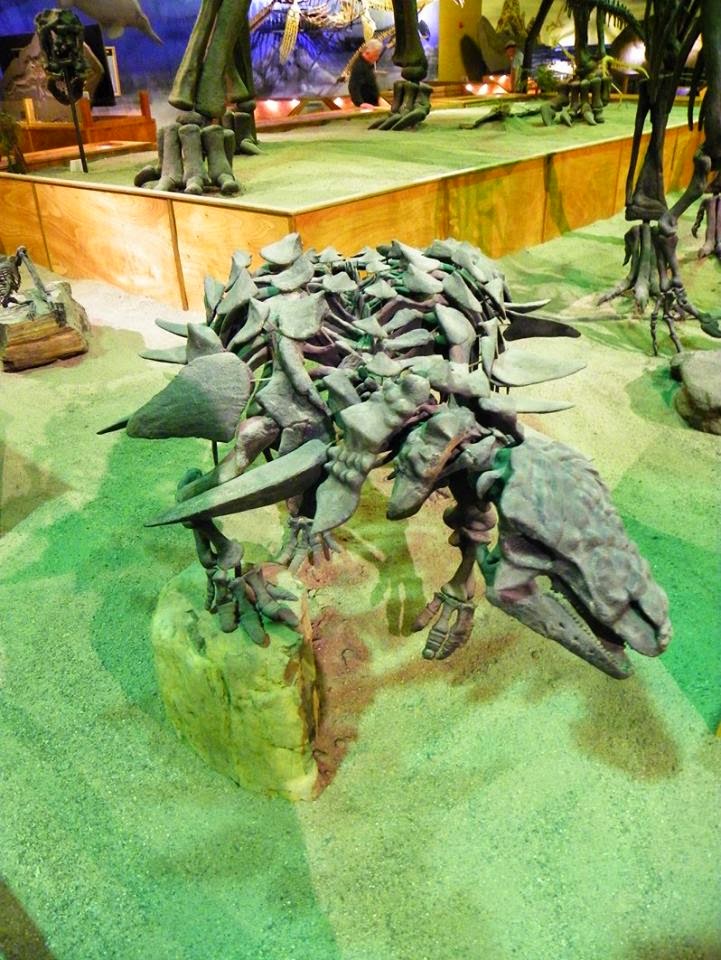 Indeed the Wyoming Dinosaur Center consistently tops the best dinosaur museum’s you can visit in the states, so if you’re planning a holiday to the West, I suggest this destination make’s your list.