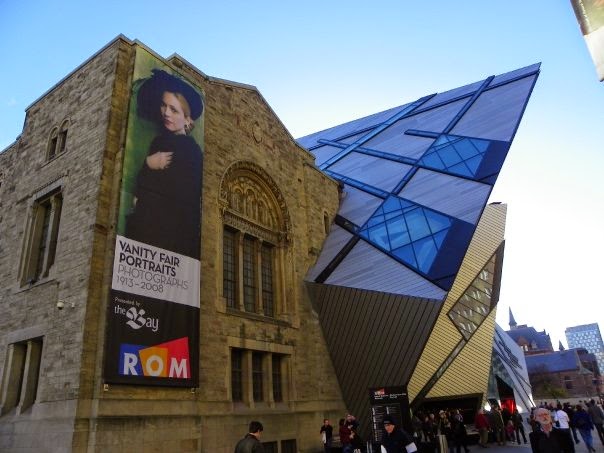 The Royal Ontario Museum (ROM) was the main reason I wanted to visit eastern Canada, and I had intended to drop in on Friday afternoon when it would be reasonably quiet. Instead I ended up going Saturday morning. Unfortunately this particular weekend Toronto was hosting its Santa Parade, one of the largest Christmas parades in the world, so you can imagine how large the crowds were during my visit. It also didn’t help that the museum was displaying the Dead Sea Scrolls as well at the time. 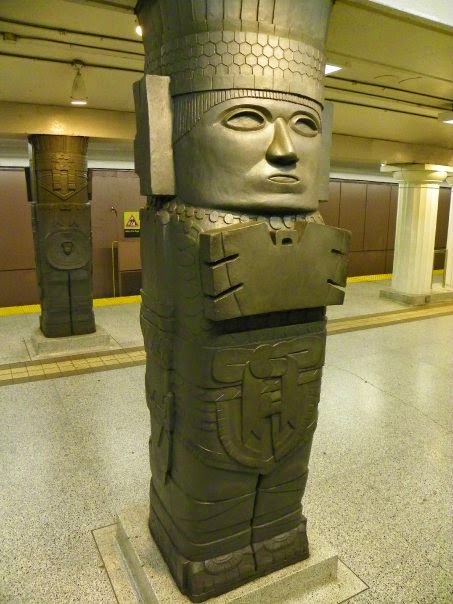 Always keen to try the public transport of a city I caught the Toronto subway system, which I have to say is easy to use. Working out how to catch a train or bus can sometimes be a pain in a foreign country as you’ll usually find yourself staring at some automated kiosk that requires a bachelor’s degree in astrophysics with a minor in international diplomacy to figure out how to obtain a single daily pass ticket. Toronto has kept it easy for the infrequent traveller as, just before the subway turnstile there’s a little ‘bubble-gum machine’ that takes change (something you always end up accruing and have trouble getting rid of in a foreign country) and spits out tokens. The added bonus is you get to use a subway token- how ‘quaint’ is that? 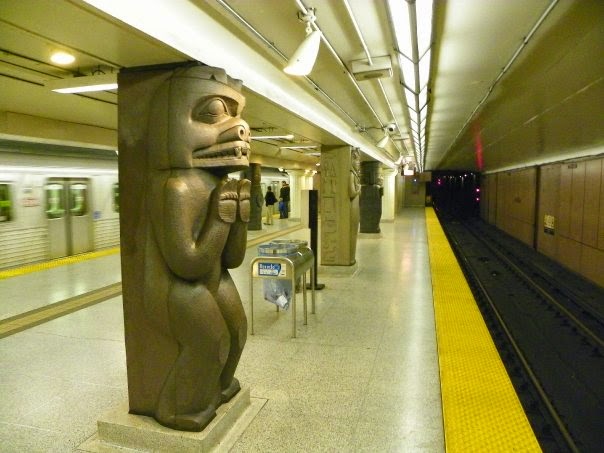 The ROM has its own station on the network and oh what a station it is. Much like the American Natural History Museum in New York, the platform has been ‘themed’, with all of the columns holding up the tunnel roof turned into Mayan, Egyptian and Native American totems and statues. 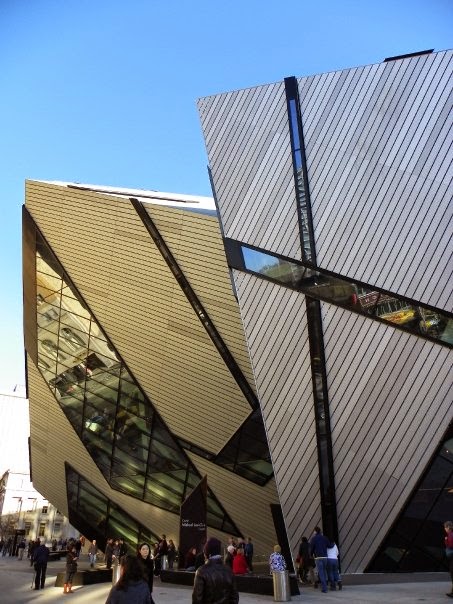 The museum itself is a little odd as the older building has recently had a bizarre extension added to expand the original floor space. Called the Michael Lee-Chin Crystal, the building now looks like it has one of those old Rubik’s cube snakes bundled up in the middle of it. This extension is all odd angles and weird protrusions jutting out in the strangest places and I don’t mind it per say, but it must be a nightmare to work in as you’d be in constant fear of smacking your head or shin if your mind wanders off for even a second. 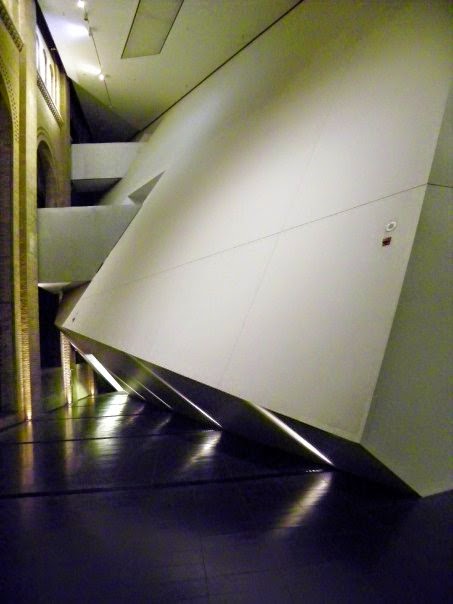 I wasn’t all that interested in the Dead Sea Scrolls but did have a quick look. As you can imagine there wasn’t a lot to see as the light levels have to be low to save the ancient parchment, and each little display was behind some very thick safety glass and surrounded by about a thousand onlookers. This was definitely not a display to see with a large crowd. What I did find fascinating was that the museum rotated the scrolls on display every few weeks, I guess ensuring those Dead Sea Scroll groupies out there get a chance to see their favourite proverb or ancient Hebrew shopping list at some point. 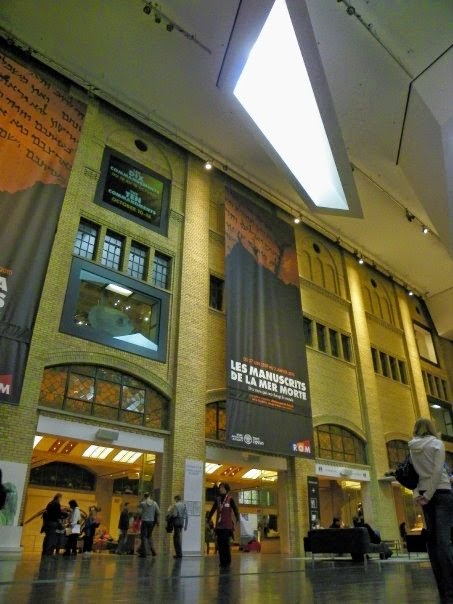 Things are set up that you have to go through some galleries to get to others so there isn’t any sort of central corridor that I could see. This means make sure you’ve got plenty of time as I don’t think this is a museum where you can skip in, see the dinosaurs, and skip out again.


First you’d have to find them, and this actually took me a few goes as the prehistoric gallery is through a weird little corridor that, at the time, held a kiddies colouring in station and a small room full of bird display cases. If I didn’t have the map I doubt I’d have ever investigated the area beyond this point and may have missed the dinosaurs all together. 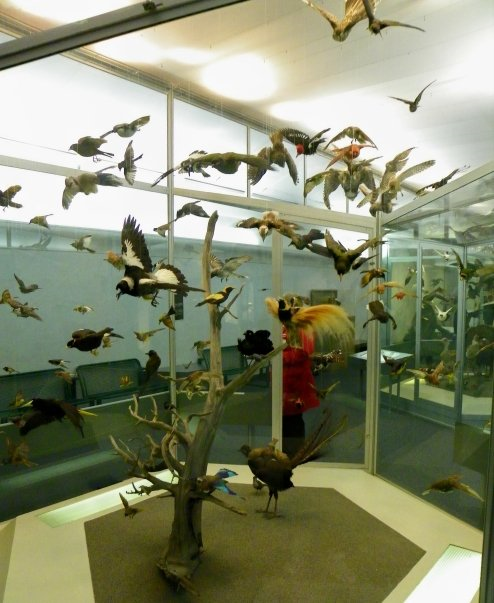 So…through the room, around the Australian bird display, turn the corner, down the ramp and you’re now in the first of three prehistoric galleries containing the ROM’s mammal and Cretaceous displays.


Here you’ll see some museum staples like an Irish elk (which I think every museum I’ve visited in the last 3 years has had) as well as a Mastodon, Giant Sloth, Short Face Bear and Phorusrhacos. 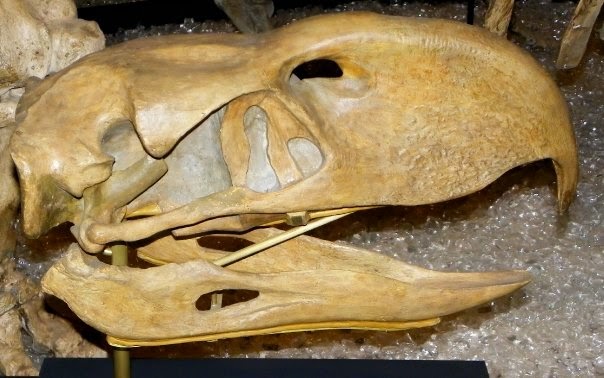 Each Cenozoic era seems to be represented by a little island-of-a-display that you can walk around and view from all four sides. With the largest animals in the middle and smaller species on the outside, this method allows for more specimens to be shown then you’d get with just a flat display along a wall. The negative is it makes the actually viewing of each animal hard as there’s almost always going to be something in the way of what you’re looking at. 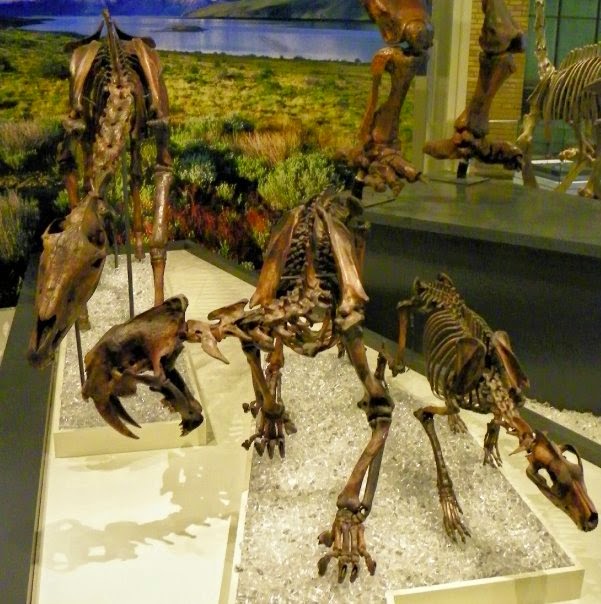 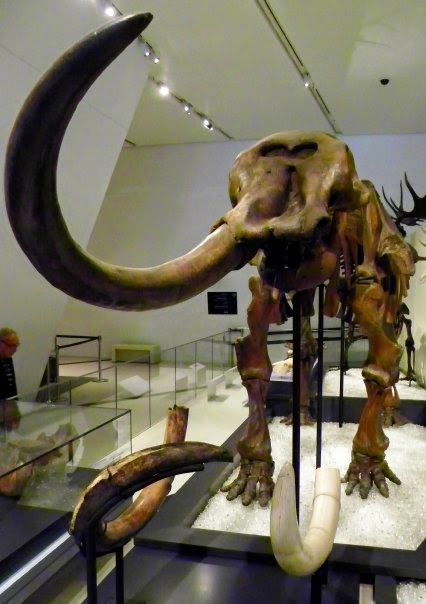 For the general public this isn’t such a big deal, but for paleo-fans, well it’s impossible to get that isolated photo of an animal without something else’s hoof, horn or tail getting in the way. I found myself working pretty hard to get any sort of descent photo of individual animals, and any group photo quickly merged into a jumble of brown bones and glass reflections.


As for the dinosaur displays in the James and Louise Temerty Galleries, well this may sound weird but I found myself feeling a little sorry for the museum here. 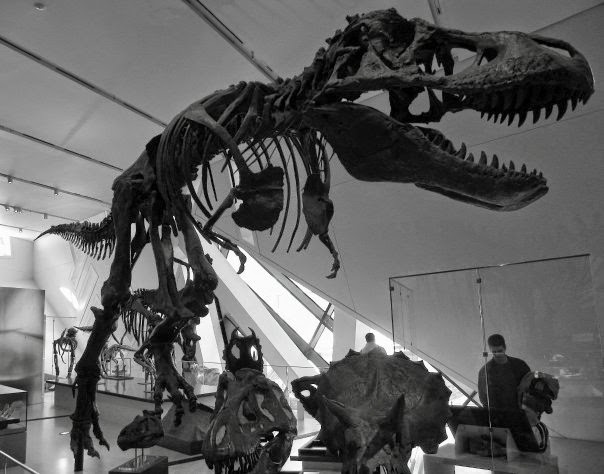 They had a grand T-rex, a charging bull-like Chasmosaurus, a few ceratopsian skulls and a Protoceratops, but I found myself wanting something new. I mean if you go to any natural history museum in the world you’re going to see most of these species. For all the richness of the Canadian dinosaur fields they’ve unfortunately exported so many of their iconic dinosaurs to the world that most native species have now become a little old hat. This feeling certainly isn’t helped by the fact that there doesn’t seem to be a lot of patriotism involved with the display either. I never really found myself looking at anything that was displayed as ‘local’; the fossils were just displayed and you were left to work it out for yourself… but I’ll talk more about this later. 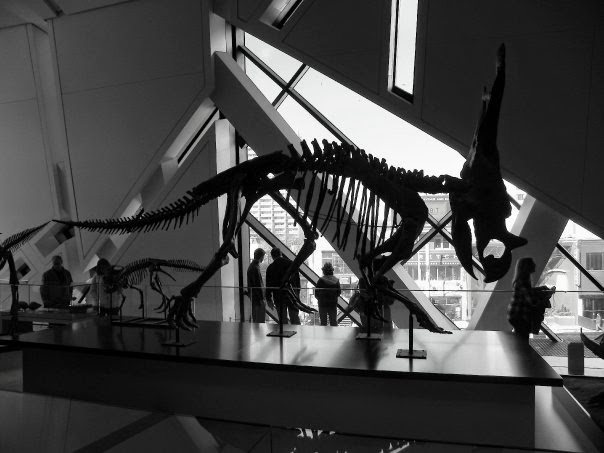 My growing disappointment wasn’t helped by two things. The first was that, as I’d been so focused on looking and photographing the animal displays I never really gave the blank Rubik’s wall behind me a close look. All those angles and protruding triangle walls meant I’d missed the tiny, almost hidden corridor from the Cretaceous display into the Jurassic, and I honestly almost walked away at that point shaking my head thinking ‘is that’s it?’ 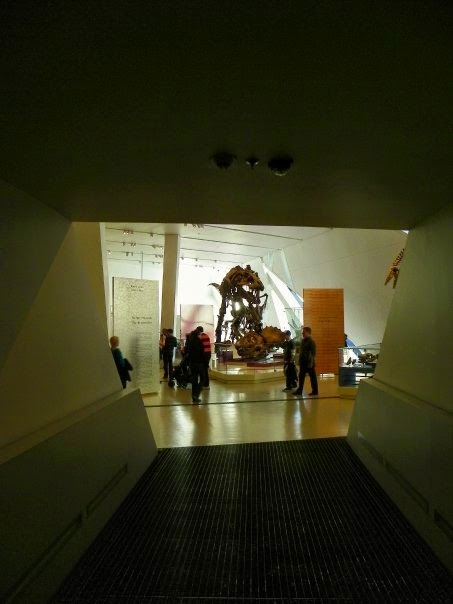 As it turns out it wasn’t.

The Jurassic room through that little cubby-hole (and across a weird walkway) is stuffed with dinosaurs, including a 27m Barosaurus, Allosaurus, Stegosaurus, numerous hadrosaurs, ichthyosaurs, an Albertosaurus, one huge Acheron stuck hanging in mid-air in one corner, and one of those new oviraptorids called Chirostenotes. 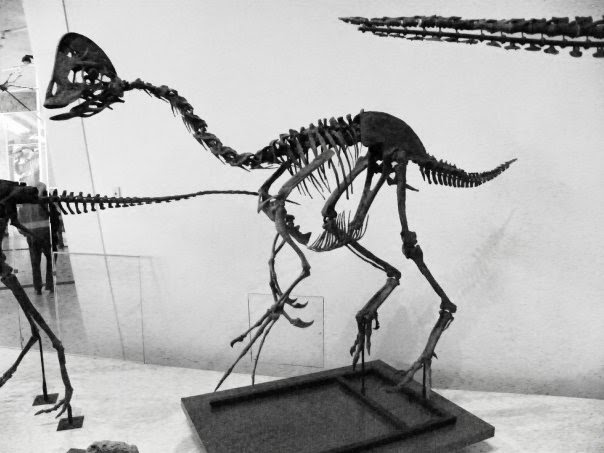 I know, I know, much like Jurassic Park, many of the species I just mentioned were in fact Cretaceous.


Due to the way the display is currently set up I think its organisers have at some stage made a really big boo-boo and are currently trying to figure out how to fix it. To me the second gallery was supposed to hold all the dinosaurs, while the first was supposed to be just mammals, but when they reorganised the museum they realised they couldn’t fit all those dinosaurs in the one room so they were forced to compromise. Again, no real proof of this, its just that’s what it feels like and could explain the jumbled way the dinosaurs are displayed. 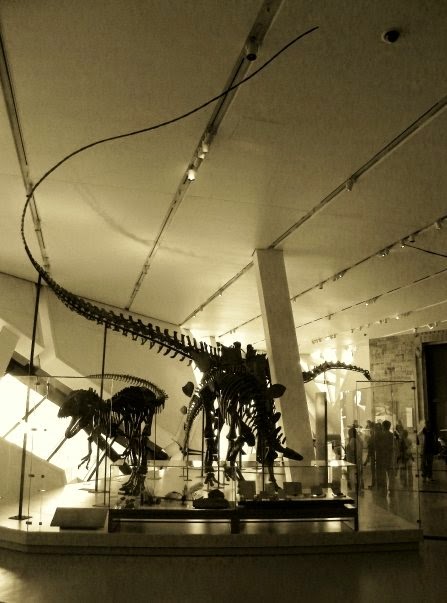 Further evidence of this is that this new gallery is huge, yet for the most bizarre reason the exhibition’s planners have decided the best place to put their dinosaurs is next to or behind the roof’s support columns. There’s ample free floor space, yet everywhere you look a column seems to get in the way, and the reason I found this so frustrating is that there just isn’t that many columns in the room to begin with. Surely the fossils could have been arranged in a way that gives you an uncluttered look at them? 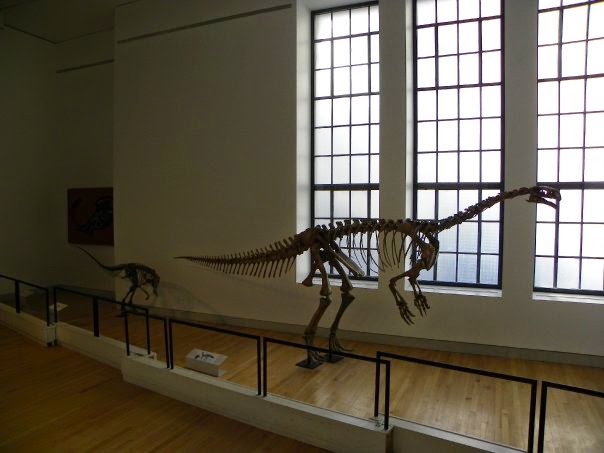 On the far side of the Jurassic display is the Triassic gallery; well that’s just a white walled corridor with bare floorboards next to the toilets. There’s very little colour throughout the three prehistoric galleries to begin with and, with so much to show, that’s kind of understandable. Yet in this little corner where there isn’t that much on display you’d think the ROM could really have designed a display full of colour and life. Instead it’s a featureless alcove that hardly anybody enters unless they’re dragging a waddling child by the hand that’s desperate for a pee.

Having done a little research, later I discovered the ROM’s prehistoric galleries used to be full of murals, placing many of the skeletons in more life-like settings. They looked fantastic in the few pictures I’ve managed to find, and this goes back to one of my earlier points. This type of display really allows you to tell a story, not only of the animal but where they came from. By placing them in an environment you get to talk about that environment and can wave a little patriotic flag at the same time (i.e. this is what Canada used to look like). 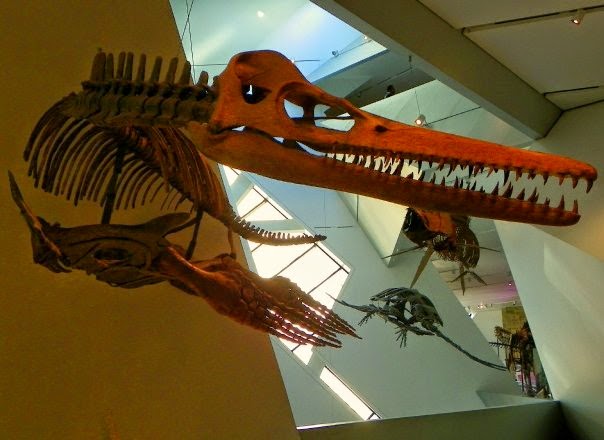 I’m not sure what it is, but many museums seem to be moving away from this more realistic style of display into the more open, window filled galleries you can see at the ROM and AMNH, and I personally think it’s a mistake. Cold displays of naked skeletons that become mashed together with whatever other fossils are nearby is certainly not an attractive way to look at something that should be instilling the spectator with jaw-dropping awesomeness. There’s little or no context with an open display like the ROM’s… and as for this need for modern curators to have natural history displays in rooms full of windows…STOP IT! 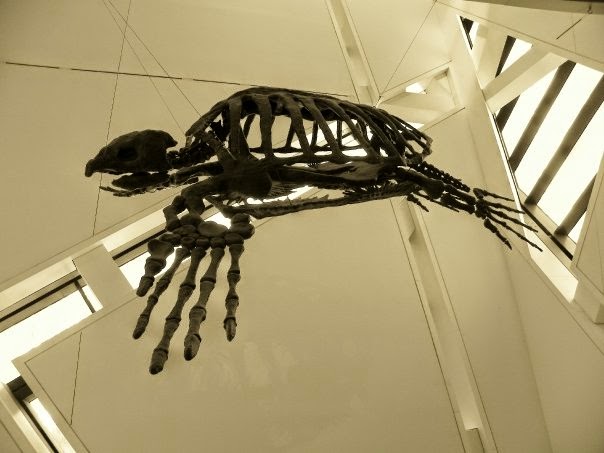 With the sun beating through glass (that’s all too often dirty on the outside), the display becomes little more than washed-out black and white skeletons in a room that’s stinking hot during summer and freezing cold during winter. In the ROM, thanks to all those angled windows, there literally wasn’t a single display case that didn’t have a dirty big, sun-filled window reflected in it…and due to the angles of all those weird windows this isn’t a problem that will go away as the sun moves throughout the day. 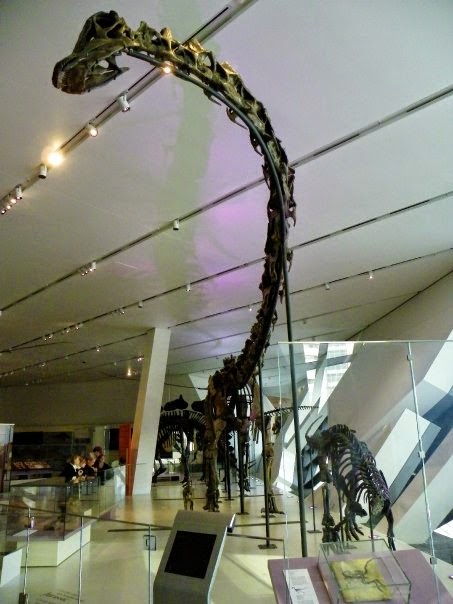 Brick up those windows, splash some paint on those walls and let’s get back to the way we used to present our dinosaurs shall we? 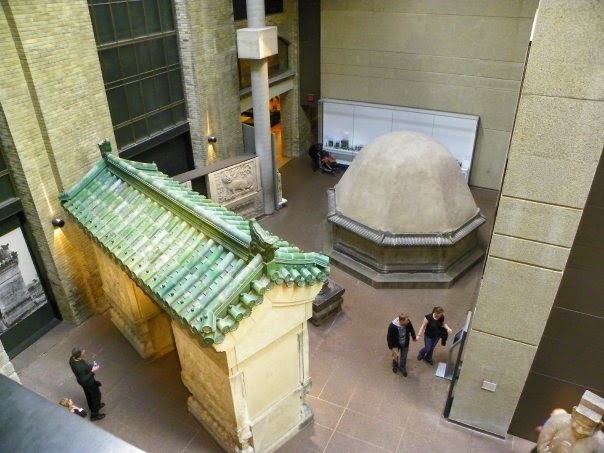 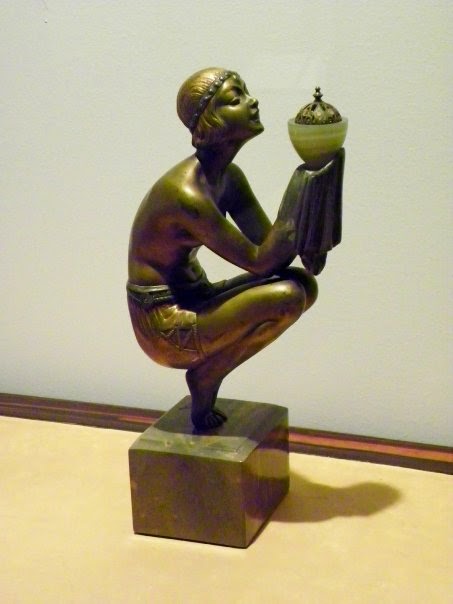 As for the rest of the ROM, well it seems to be a cross between a natural history museum and the New York MET. The remaining galleries were mostly human cultural displays from around the world. 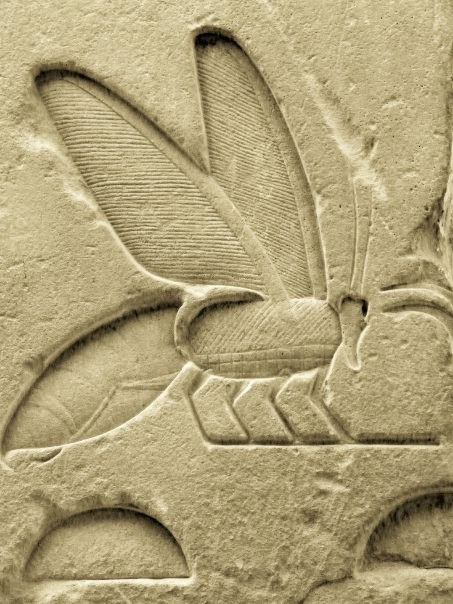 There’s a great ancient display and a nice little room of Art Deco objects (a favourite of mine). There’s also a large collection of ancient Asian artwork (mostly from China and Japan) that was fantastic.
I may be a little unfair here but the ROM also has potentially the worst museum gift shop I’ve been to in my life. I mean, there wasn’t a single dinosaur book for anyone with a reading level past a kindergartener (I can only hope I perhaps missed another museum store in the kaleidoscope building).

Also keep an eye out for a number of other fossils hidden throughout the building. Soaring high above through one roof space is a skeleton of Quetzalcoatlus, while one wall in the main entry hall had a large hadrosaur. There may be others, so watch out for them. 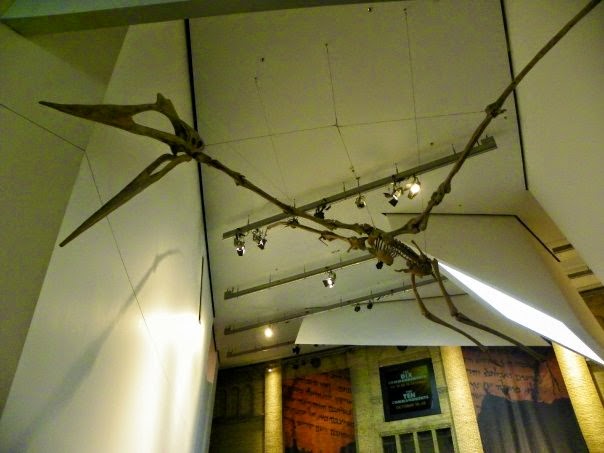 Still, despite my misgivings about the building, the ROM has one of palaeontology’s largest exhibits of prehistoric creatures…if only they were given a little bit of character it would easily rank as one of the world’s greatest displays! 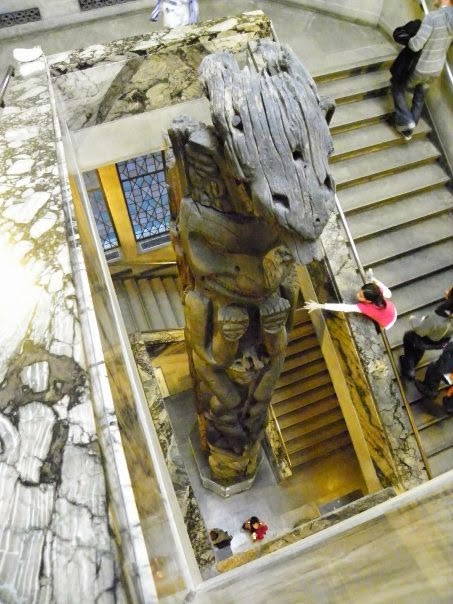