Lyme Regis- On the Road in the UK, Part Two

WARNING: This region is dangerous, with rock falls and land slips occurring regularly. Any visit to the area must be done so with caution! 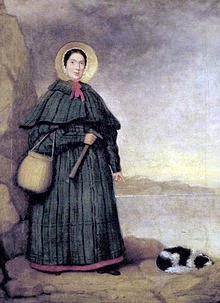 Produced by Terry Sullivan in 1908, this familiar construct describes how Mary Anning sold the sea shells she’d collected along the early Jurassic Blue Lias cliffs of the region, and is an odd little account of the origins of the modern science of palaeontology. Mary had grown up in a poor family, so to make money the young girl had begun selling the fossil shells she collected along the local shoreline. The Napoleonic war had stopped England’s gentry from travelling to the continent, forcing the rich to holiday in local rural regions.


The business was a dangerous one and Mary was nearly killed in 1833 during the landslide that took the life of her dog. Her efforts soon bore fruit when she began discovering more than just the spiral form of ammonite shells.  Mary soon unearthed the world’s first ichthyosaur skeleton, along with plesiosaurs and even a pterosaur- the first known outside of Germany. These were all purchased, and many can still be seen today in London’s Natural History Museum (NHM). Even today Lyme Regis is a source of many fine monsters from the Jurassic seas.
﻿

Mary Anning would also be associated with the world’s first image of a prehistoric landscape. The ‘Duria Antiquior’ was a watercolour painted by the English geologist, Henry De la Beche, in 1830. It was based on many of the creatures from the ancient seas of Dorset that Mary had unearthed.
When the geologist discovered Mary Anning was struggling financially, he ordered a number of lithographs to be created, the sale of which was to benefit the collector. Even though Mary had discovered many of the world’s greatest fossils at the time, the science was dominated by men who proved happy to mine her for information, and just as happy to publish this without crediting any of her discoveries. 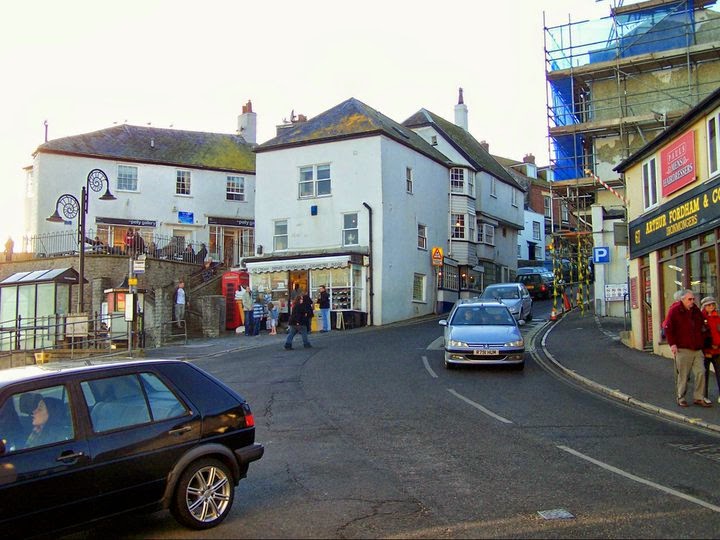 For myself, sadly I would only have a few very short hours to visit the region and really had to get a boogie on as it’s a large area and we had places to be. ‘The Pearl of Dorset’ was formerly a major English port, but today is more known as a tourist destination, and not just for dinosaurs.

The Cobb is a large harbour wall to protect the town and harbour from violent storms and sea surges. This structure appeared in Jane Austin’s final novel, Persuasion, and is a real favourite of the author’s fans, often calling themselves Janeites. 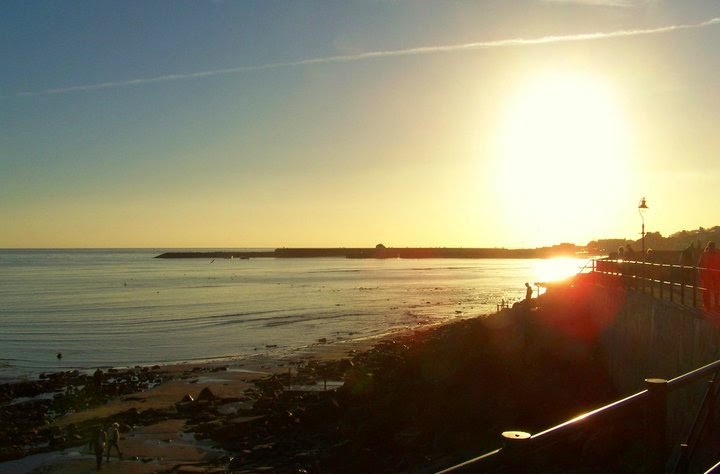 Parking: The town itself is small with narrow streets, and though there is a parking lot, it seems to fill up quickly on busy days, so expect to do a lot of walking. This is also true for the shoreline as the city is situated on top of a hill, meaning you need to head through the city, down the main road (which isn’t that steep), and down the hill and ramp to water level. 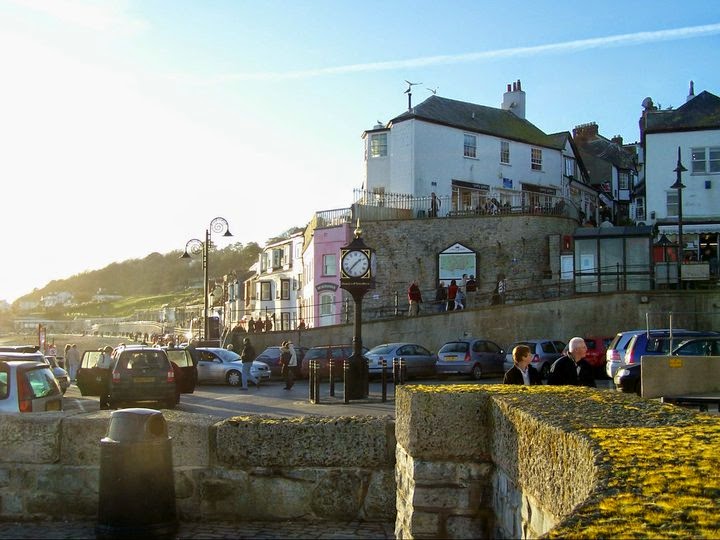 The best fossil bearing rocks are easily seen. Just head a few hundred meters up the beach where you can clearly see layers of rock along the cliff face that were formed during the Mesozoic, and you’re there. 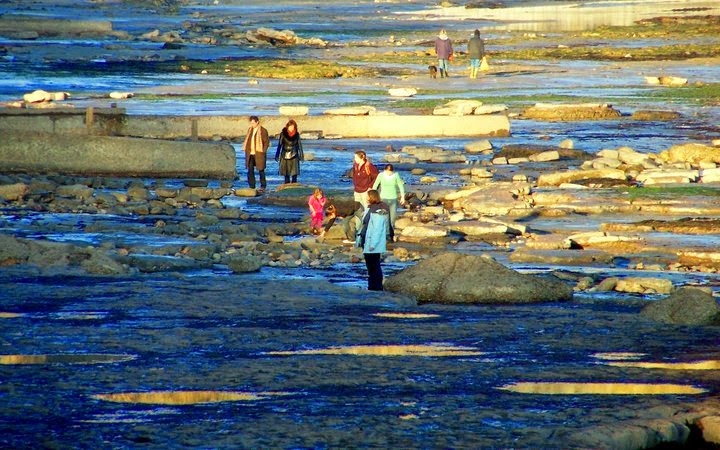 I can also guarantee there will be people fossicking, so just follow the crowd. Much of the cliff is limestone, itself made from the shells of microscopic organisms, so it’s important to look at every rock, and this means you don’t really need to go near the cliff as you can see things like ammonites everywhere. 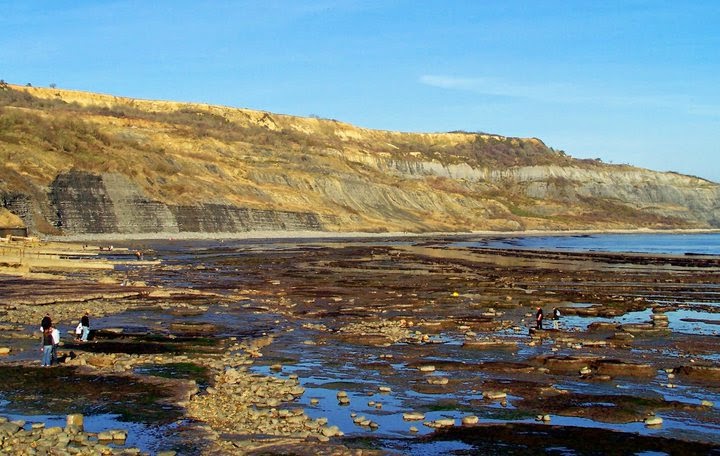 This is important to note because, as I said at the start, this area can be very dangerous. 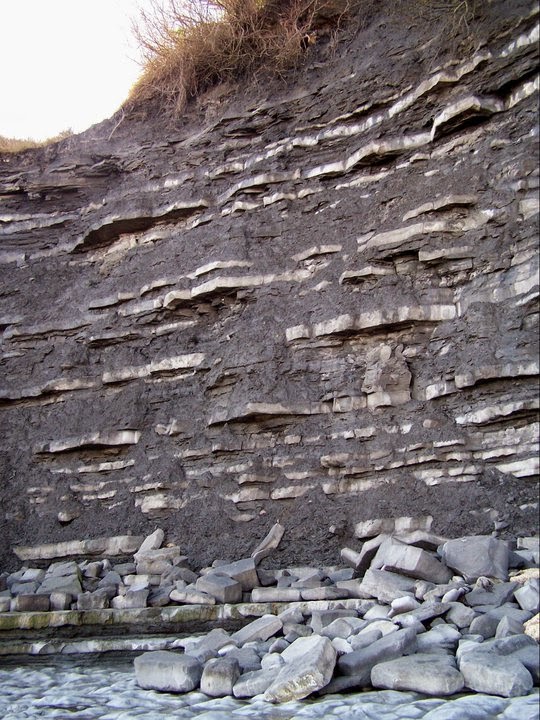 I assume I was there at low tide as the ocean was a fair distance from the cliffs, and between each was a wide, flat layer of rocks that were easy to walk across. There were also plenty or rock pools, leading to me to believe at high tide this area would be underwater. 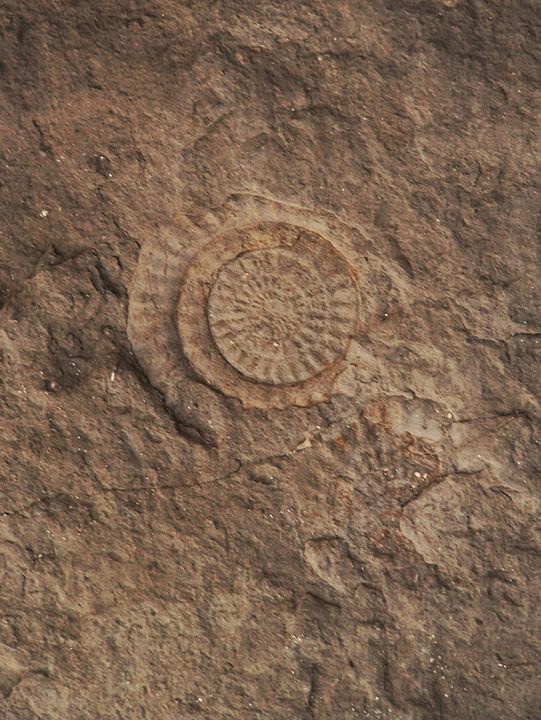 As I said, I only had a short time, but I was there long enough to find a few hand-sized ammonites, and I was more than happy with that. 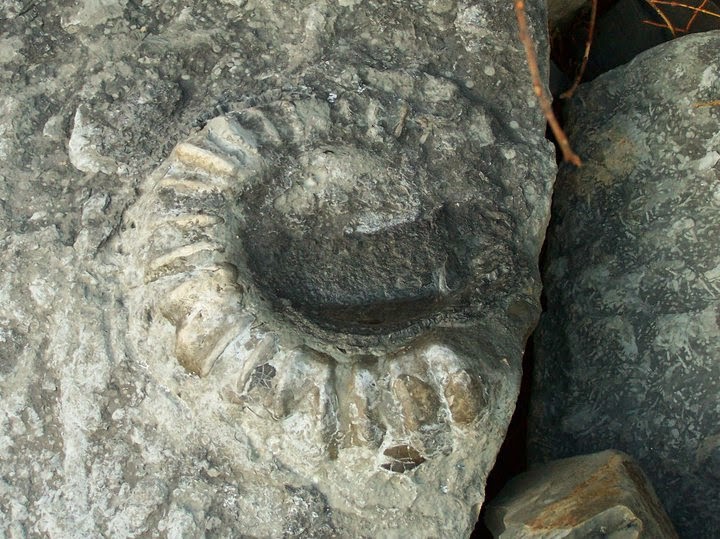 I could see some enormous ammonites contained in some large rocks, and as I had nothing to break these open, and in truth was not sure what the rules where for collecting fossils (I did find myself thinking, if its ok to take these, then why are these beauties still here?), so I was happy enough just to grab a photo. 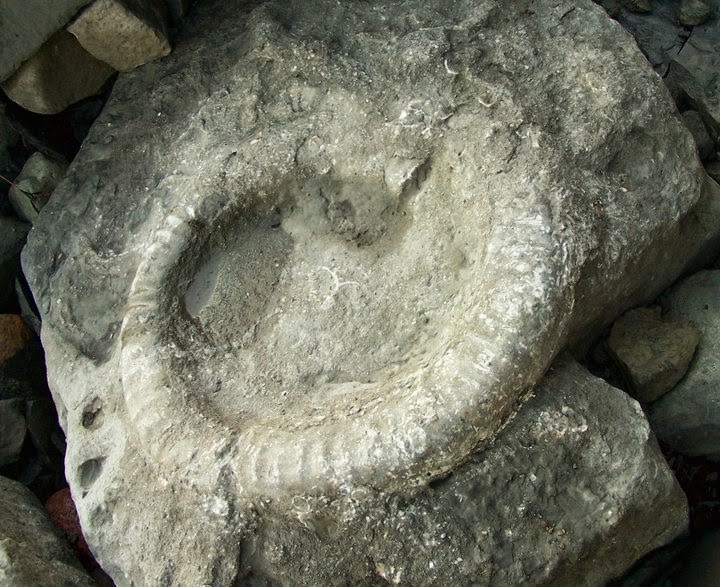 All too soon my time was up and it was back up the hill and into town. Everywhere you look there are references to fossils, even the street lights are curled and contain an ammonite spiral inside….classyyyyyy. 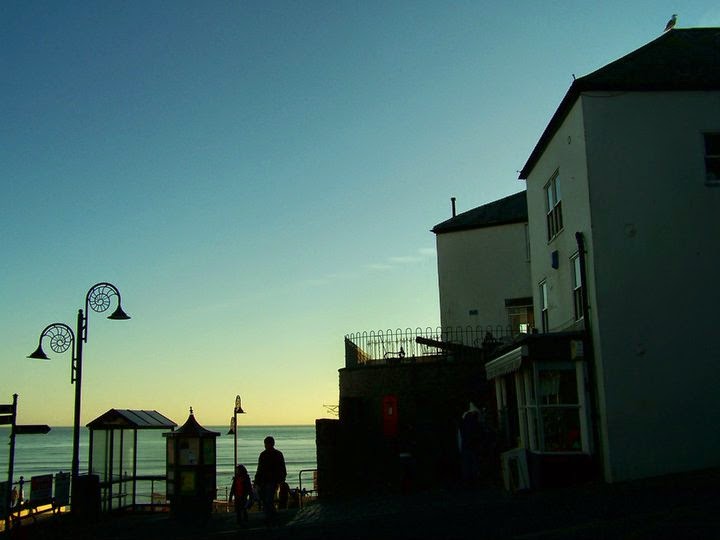 There are two museums in town, but sadly both were closed (it was getting late in the day by the time I got back from the beach). 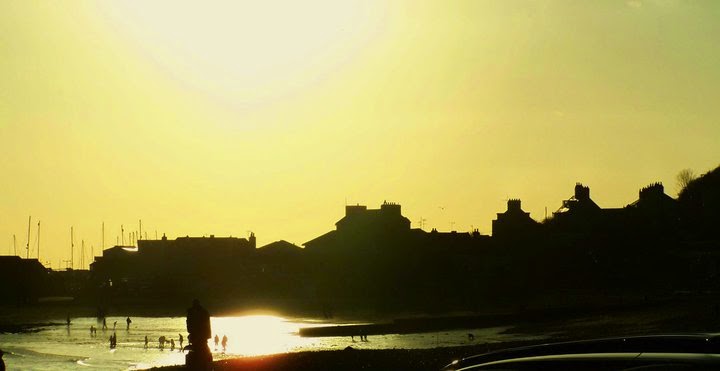 The Lyme Regis Museum is built on Mary Anning’s home and store from where she sold so many fossils. The building looks amazing and I’m sorry I missed it. 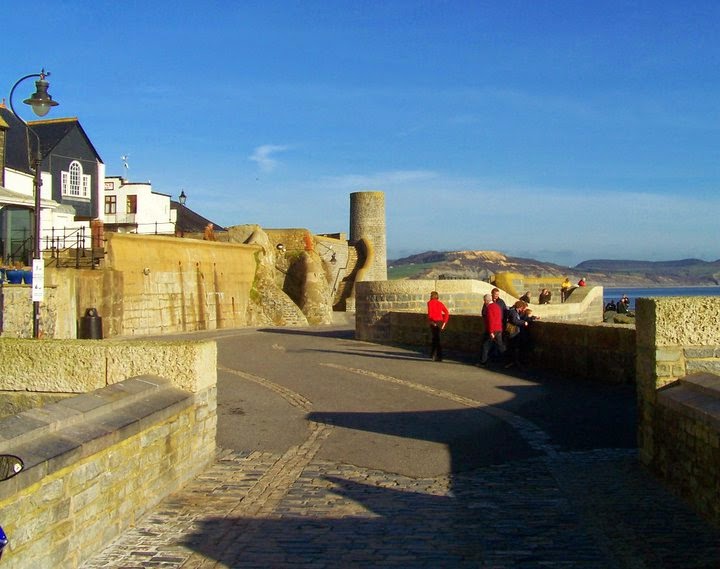 http://www.lymeregismuseum.co.uk/in-the-museum/fossils-and-rocks-of-lyme-regis
Dinosaurland Fossil Museum is a privately run institution, and contains not only great examples of local fossils, but some dinosaurs as well.
The town is also home to The Fossil Workshop, a commercial operation that not only prepares and sells fossils, but runs fossil walks- so they may be well worth a chat before you go as they may be running an excursion.
http://www.fossilworkshop.com/index.html 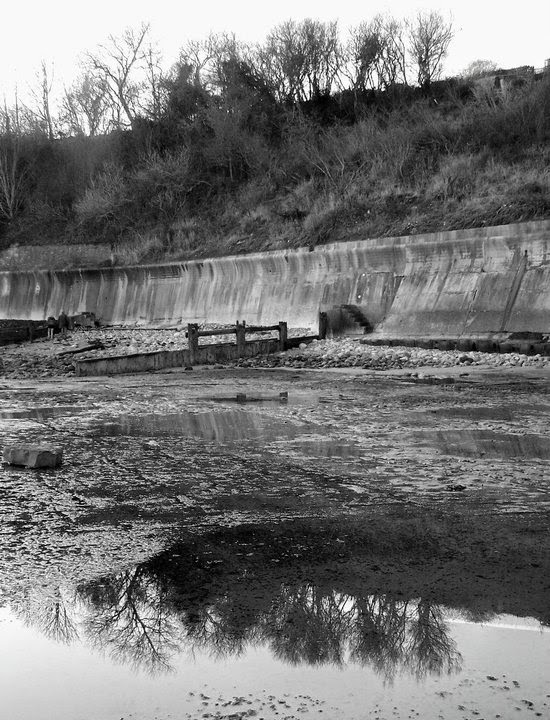