Uffington White Horse - On the Road in the UK, Part Three 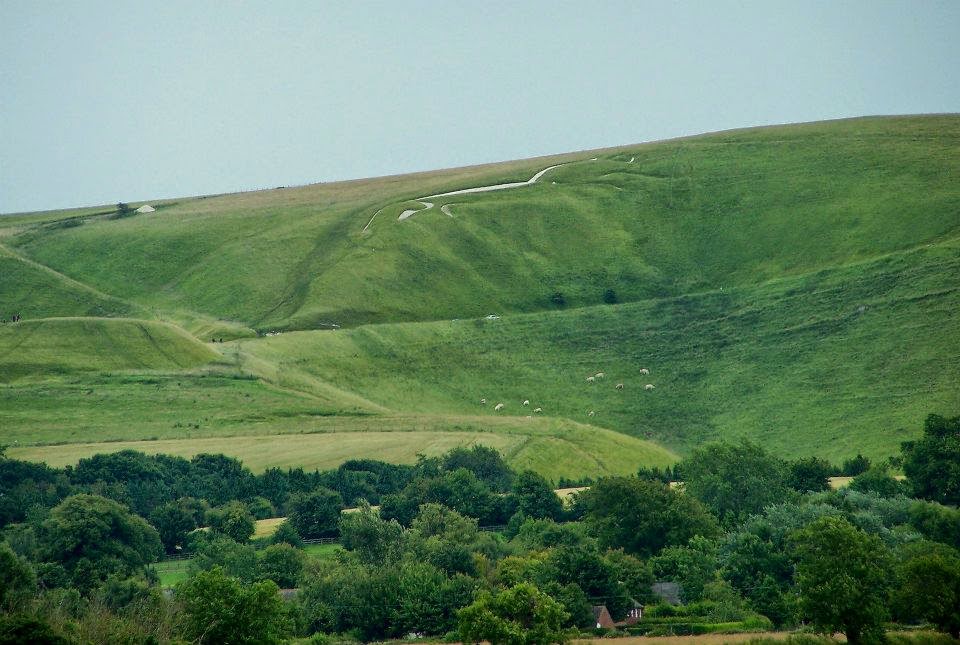 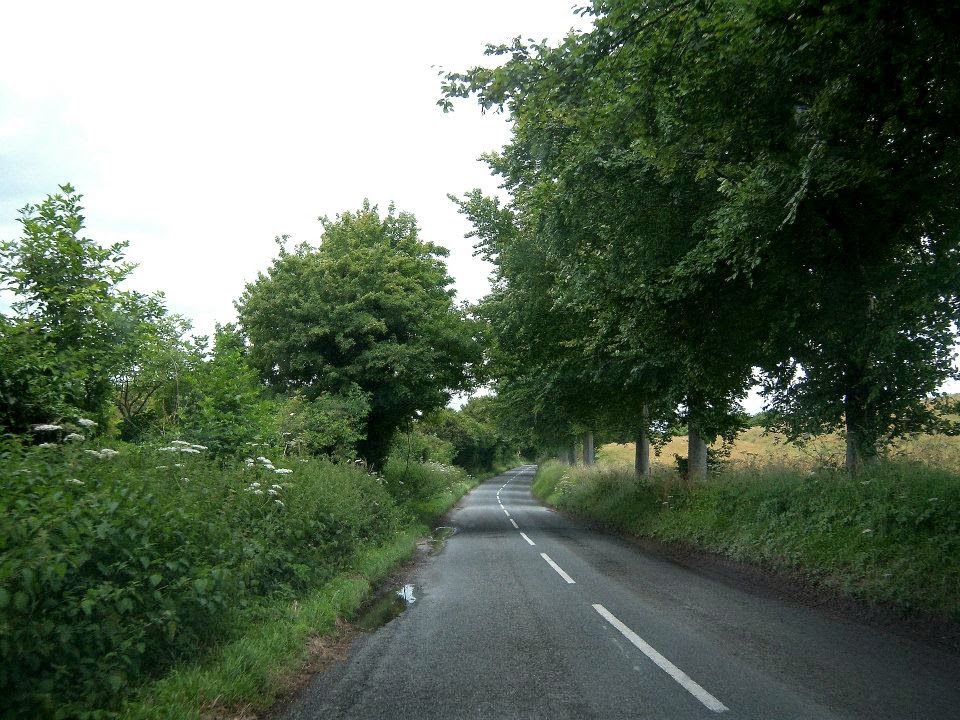 13 days into our circumnavigation of the UK, having already driven through north England, Scotland, Ireland and Wales, we had every intentions of visiting one of the largest air shows in the world, the Royal International Air Tattoo. Held at the RAF Fairford at Gloucester, unfortunately a week of solid rain had led the organizers to cancel the 2008 show and so our plans changed.
It was hard to be too disappointed, however, as the cancelation gave us a chance to visit one of the most iconic prehistoric sites in the UK. 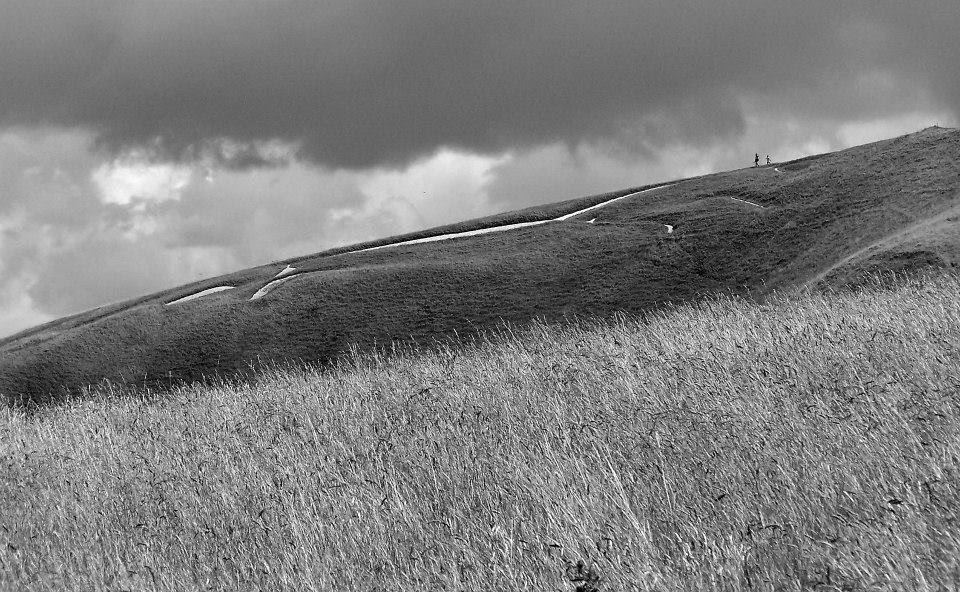 The famous White Horse at Uffington is situated in the county of Oxfordshire and is the oldest hill figure in Britain.  The horse was thought to have been built during the early Iron Age, or possibly first cut into the ground as far back as 1000BC- placing it in the Bronze Age and an astonishing 3,000 years old. Unlike most other white horses in the UK (which are more recent) paleoanthropologists and archaeologists have found Iron Age coins with depictions of a strikingly similar image in the region, all but confirming its existence at the time. 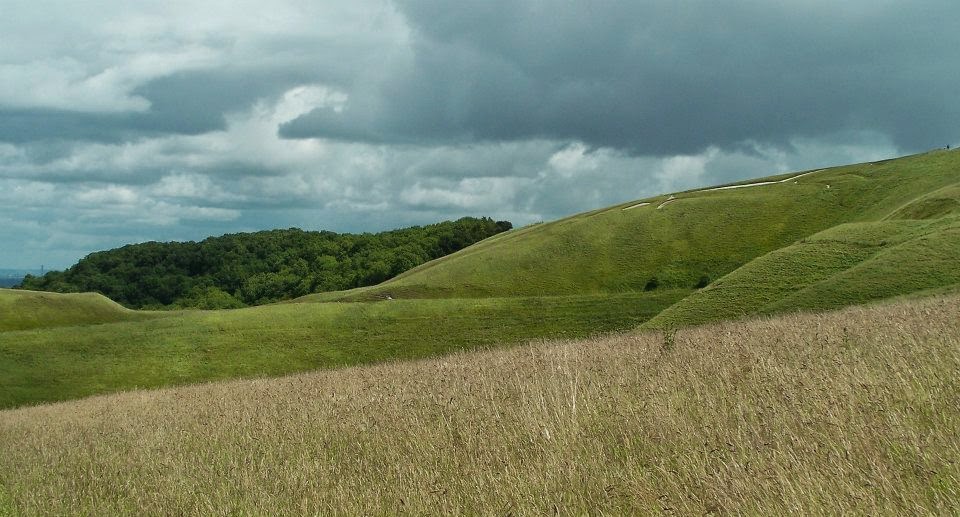 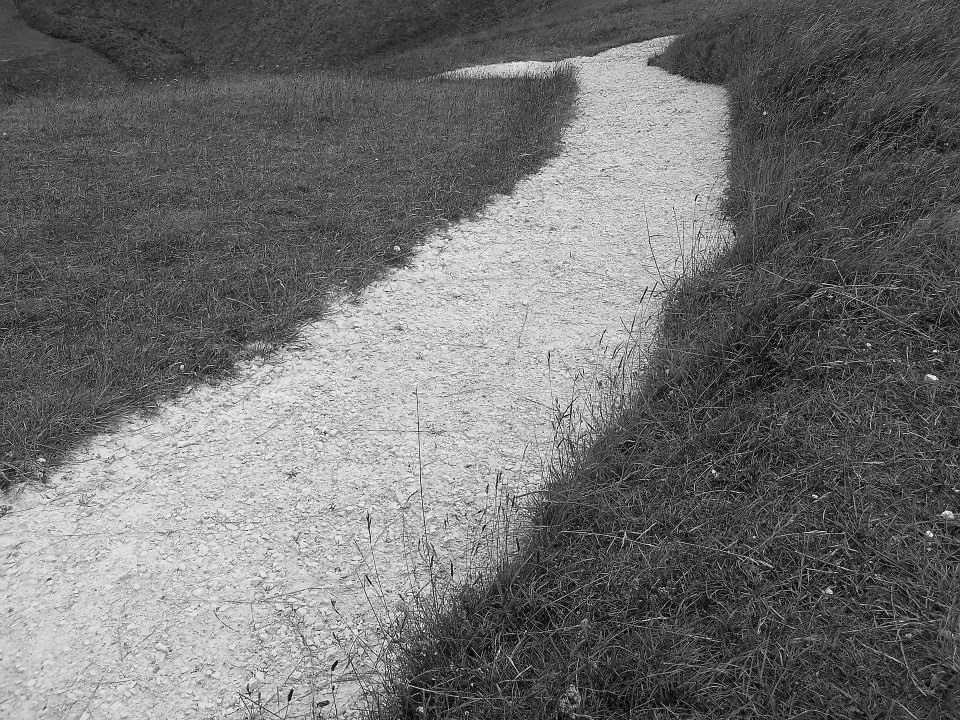 An examination of the soil at the bottom of one of these lines using Optically Stimulated Luminescence (which measures radiation levels in soil) later confirmed the image had indeed been built in the Late Bronze Age.


To visit the horse we drove up Lambourn Valley Way to the car park. From here there is a path along a gentle slope, which gets a lot steeper as you get closer to the horse. The entire complex is far larger than you’d expect, so wear comfortable, non-slip shoes. 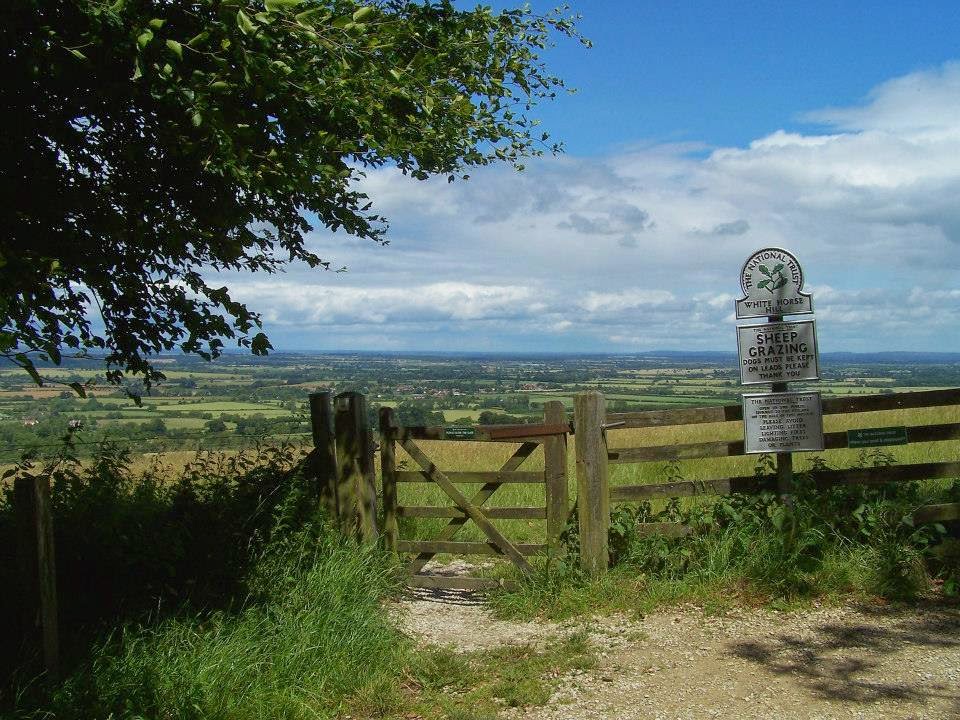 NOTE: Make sure you also close any gate you pass though as the area has a lot of sheep, which are natural lawn mowers I’m assuming. 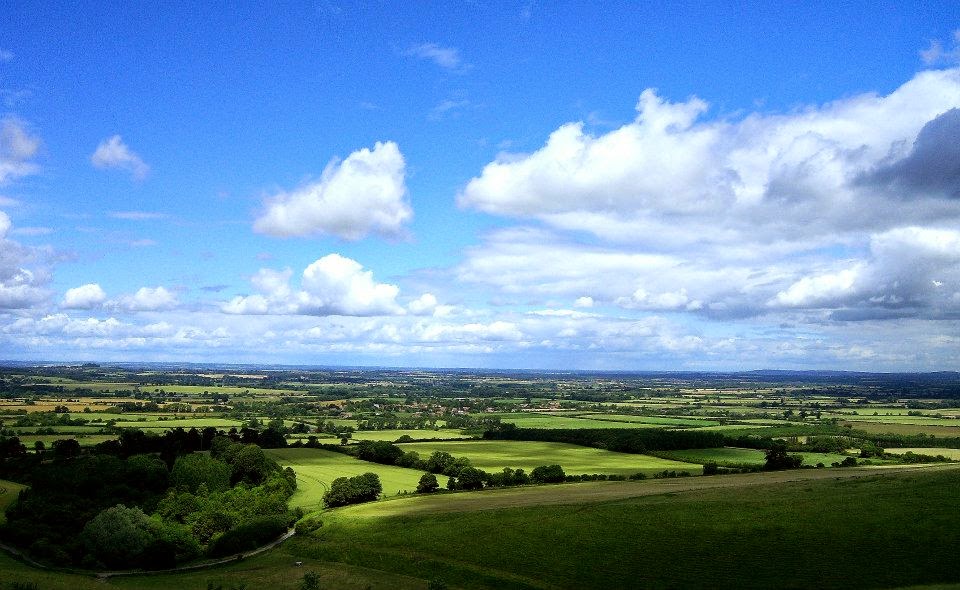 The horse itself is 114m (374ft) long, giving you an idea how large and steep the hill is; in fact once at the top you get a commanding view of the countryside as far as the eye can see.

You can see so far that in one area I could see a large storm, while on the other side of the hill was fine sunshine. 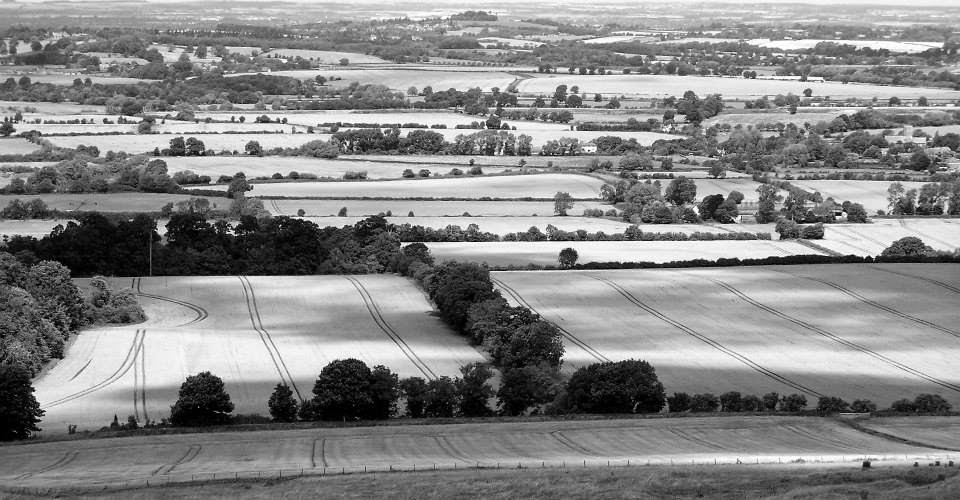 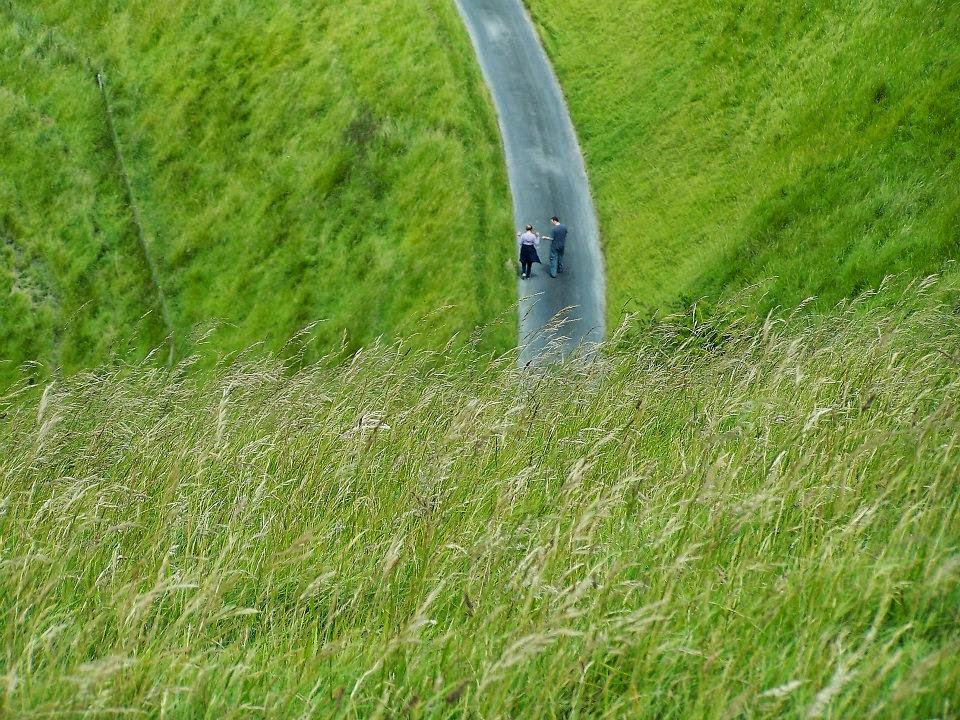 I was also so high (geographically speaking) I still managed to get a bit of an air show when a RAF Hercules buzzed the hill, possibly flying back from the distant air base. Indeed the hill - which is the highest point in Oxfordshire - rises so steeply from the patchwork landscape below it is regularly used by paragliders to launch into the air. 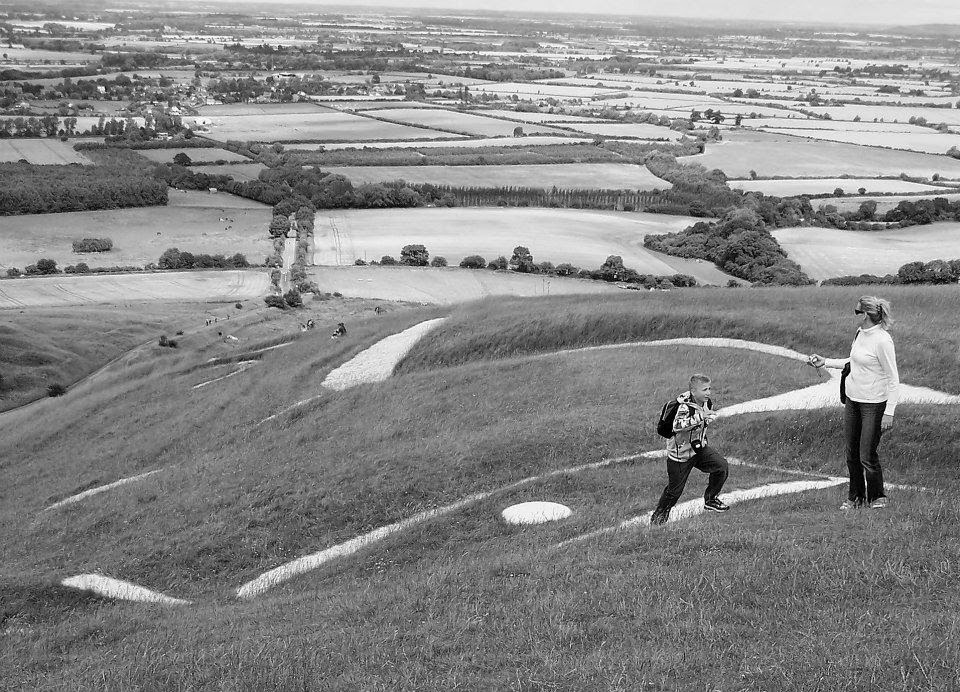 There is no barrier protecting the horse, which has been the subject of clowns either destroying the image or adding to it (at one point the horse was given a rider to the horror of those charged with its upkeep), so you need to be a little careful, but it’s also amazing to be able to get this close to the real thing. 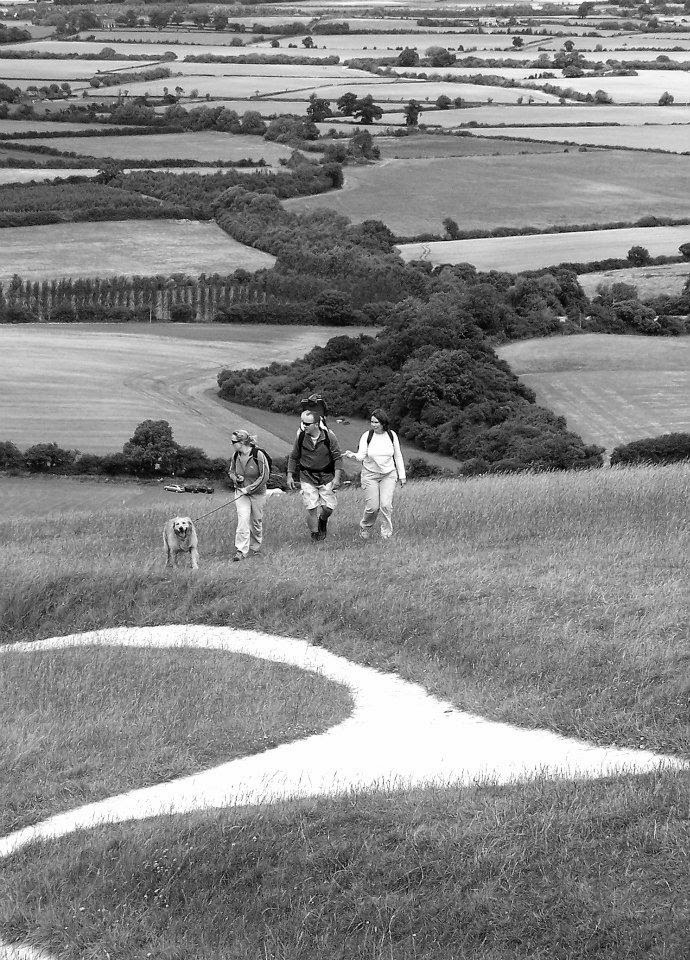 The hill is a protected site, and used to be ‘scourged’ every 7 years to keep the image crisp and clean. Without this upkeep the horse would quickly fade from view.  This work is done by officials from National Heritage.


The chalk itself has been dated to the Cretaceous, making it around 80 million years old.


Though there had been rain all week, I was lucky enough to head up to the horse in patchy sunshine, and it was a great stroll. The path is well worn, the natural grassland mostly manicured- I assume from the numerous sheep- and the air was alive with butterflies and bees. 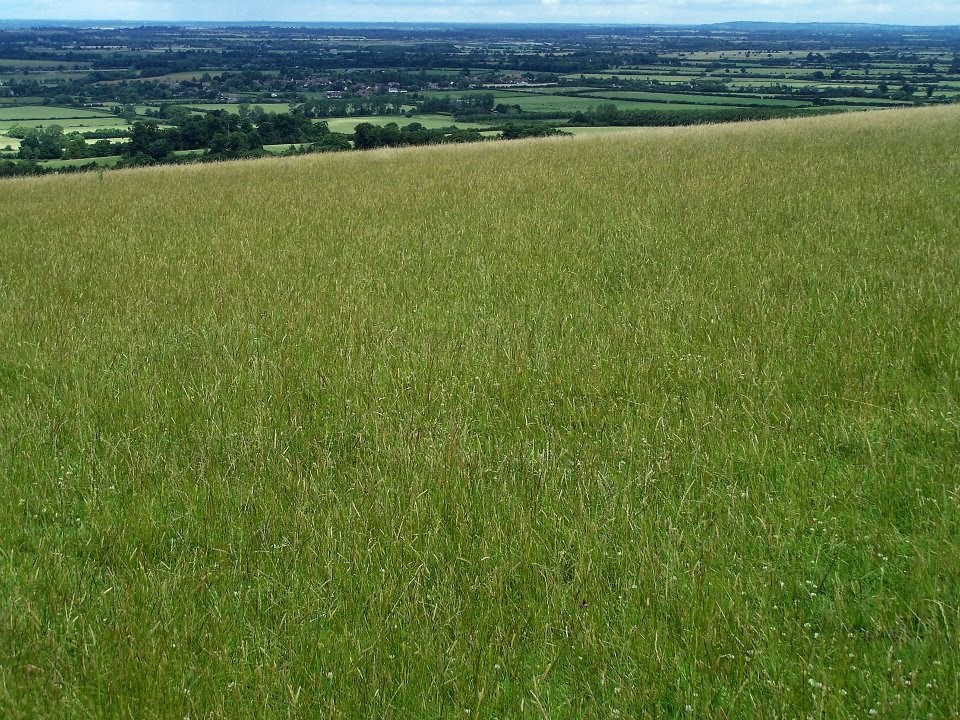 Along the path from the carpark there is a view just before the horse of an interesting Pleistocene geographic feature. It is believed the valley running just under the Horse’s head, known as The Manger, was formed during the Ice Age as melted ice water ran away from the hill. This is known as a ‘dry valley’ as there is no evidence of a river or creek that could have formed the depression, indicating it was created during the Ice Age by a glacier or melted ice. The name comes from the legend that it is in this large grassy depression where the White horse feeds at night. 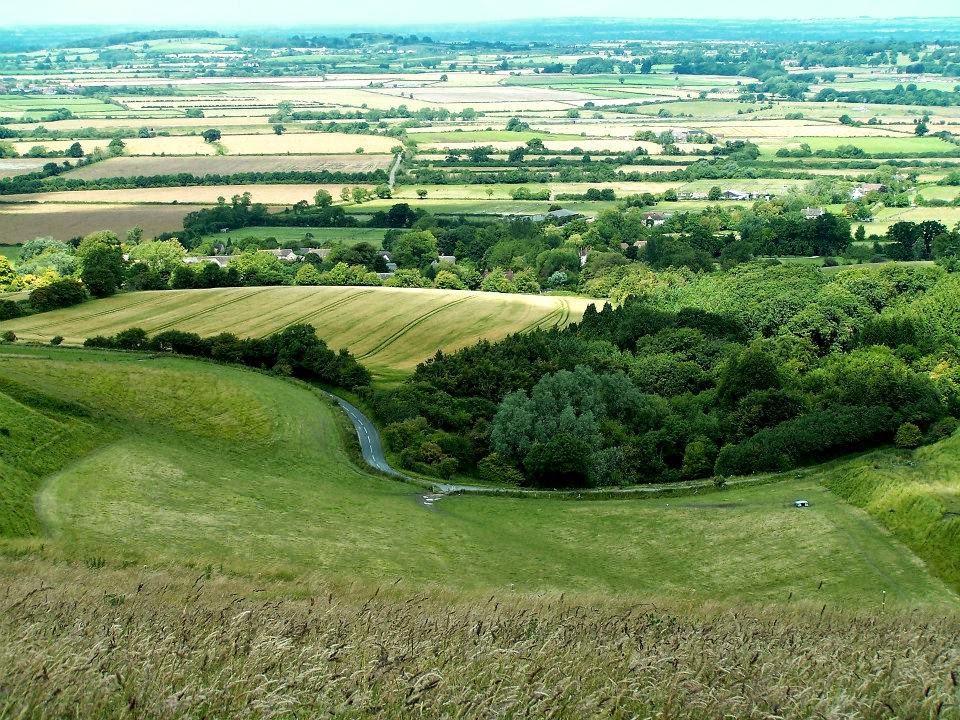 At the far end of the valley are also the ‘Giant Stairs’; a series of step-like structures that were also most likely formed from melted ice water (called avalanche chutes) . There is also a series of large levelled out platforms, possibly formed by prehistoric farmers to create terraced crop beds. Apparently there also use to be a wheel of cheese chasing competition down the side of the Manger, and standing at the top and looking down I realised there are just some things I will not do for dairy products. 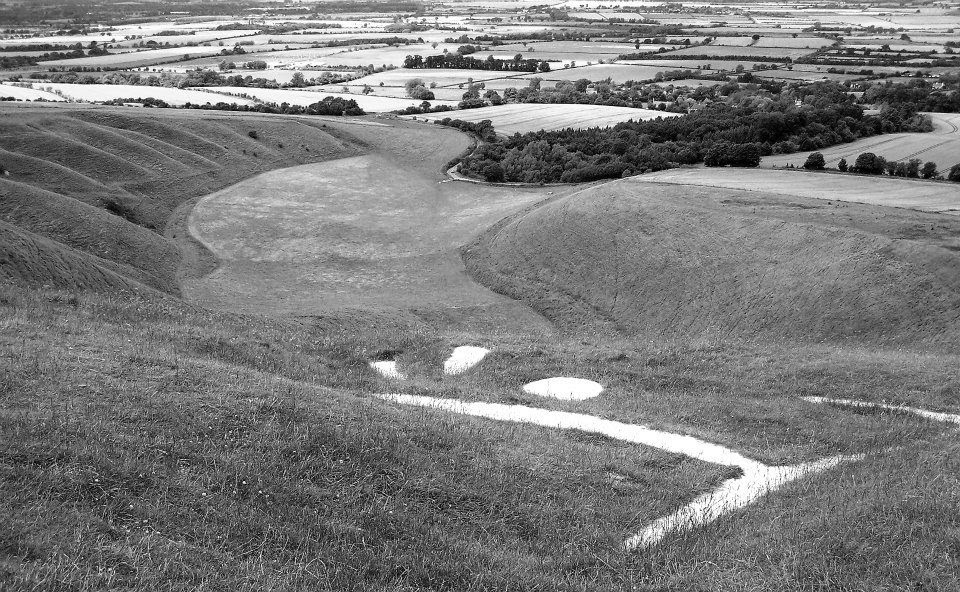 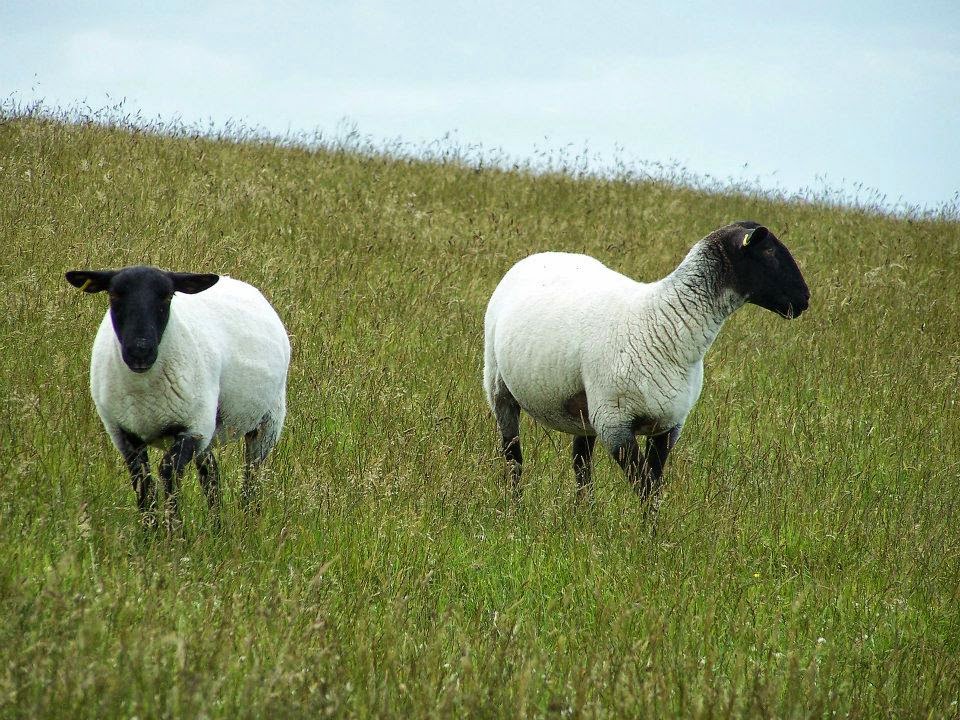 Further up the hill is the Bronze/Iron Age fortress called Uffington Castle, likely placed there for its commanding views. Sadly I was totally unaware of its existence when I visited and happily wandered past it. I do not recall anyone heading up towards it at the time, nor any signage along the path pointing it out, so just keep it in mind if you ever get the chance to visit.
Dragon Hill 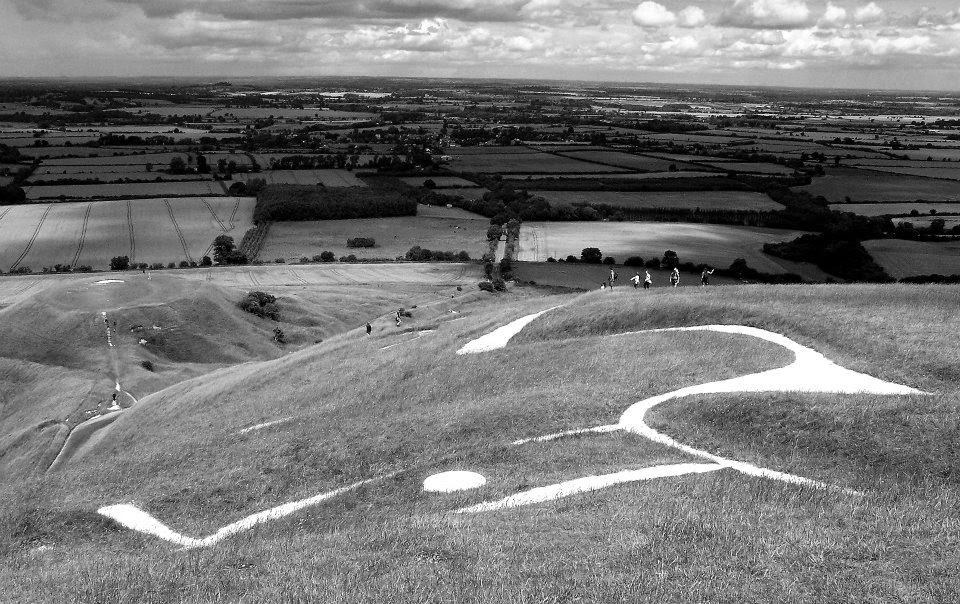 At the foot of the hill the White Horse sits on is Dragon Hill. This is a natural formation made of the same Cretaceous chalk as the horse, which at some point had its peak levelled off to create a wide, flat platform.
In mythology this small hill is where Saint George confronted and slew the great dragon. Even today there is a large exposed patch of the white chalk the hill is made from, and legend tells us this is where the blood of the dragon spilled, burning the ground and making it forever barren. 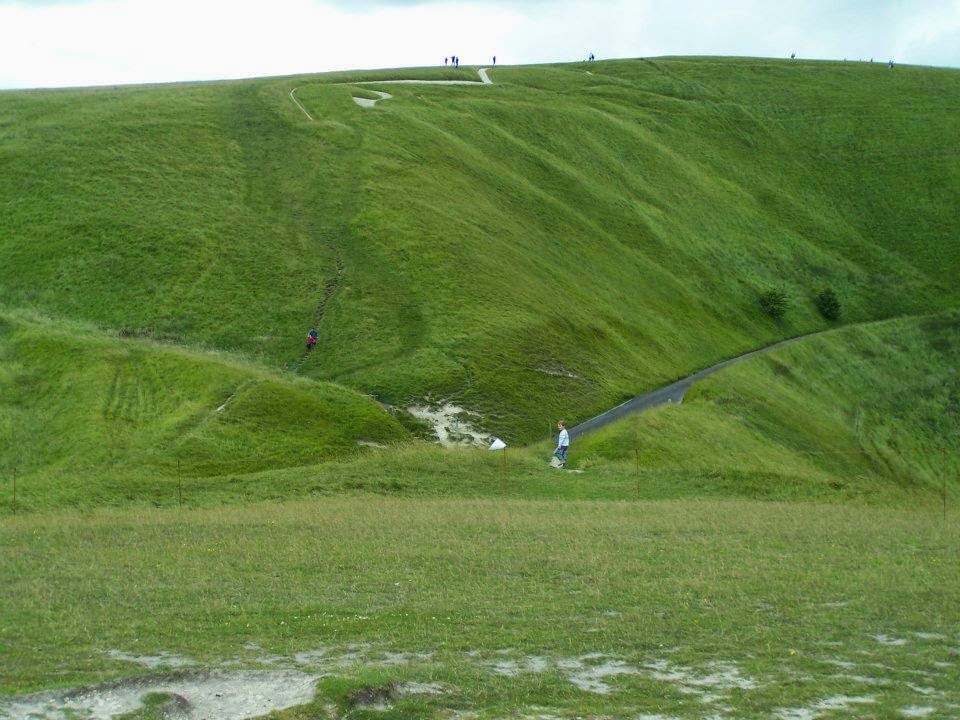 The association of both features has led some to suggest the White Horse above is not actually a representation of a horse at all but is in fact the slain dragon- others suggest it might be a fox. Dragon Hill has also been suggested as the final resting place of Uther Pendragon, linking the feature to the legend of Uther’s son, King Arthur. This hill is a natural structure, so it likely has nothing to do with any sort of burial. 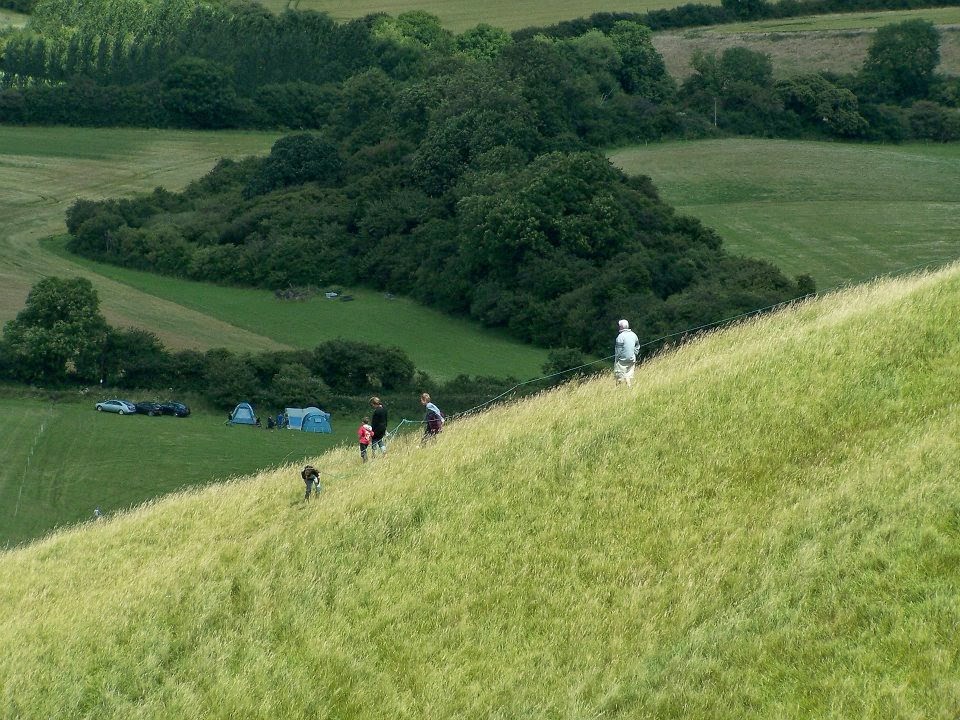 If you are walking to this spot from the White Horse, make sure you take your time as the path down the hill is insanely steep and you don’t want to imitate a rolling cheese; and though there are stairs cut in places, it is still steep. The path also crosses Dragon Hill Road, which cuts between both formations, so keep an eye out for vehicles when moving along the road. 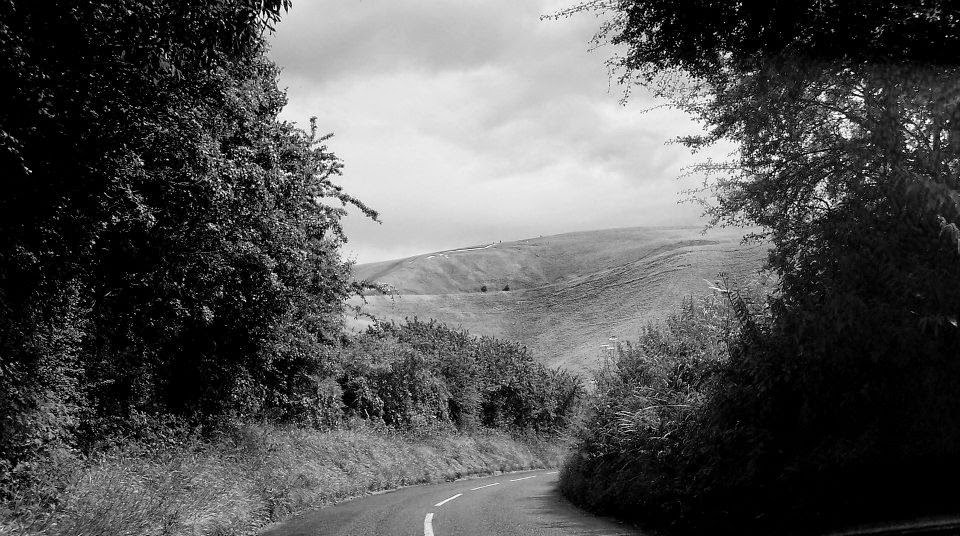