THE FICK FOSSIL AND HISTORY MUSEUM 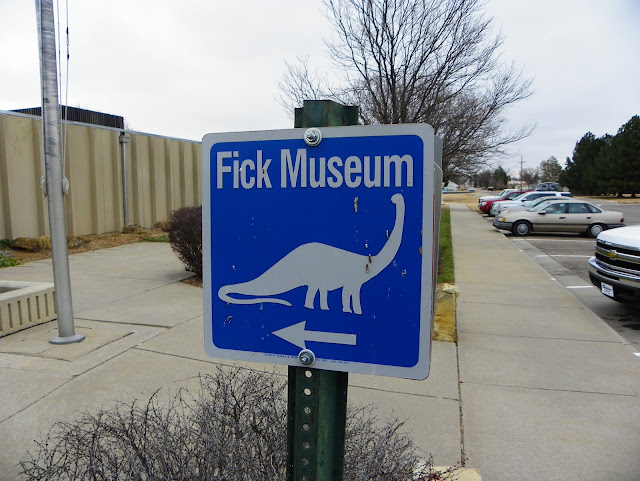 Driving through the Great Plains one of the constant features along the highway are the monster billboards highlighting local features you are approaching (or at times still nowhere near), and one we were desperate to visit was the Prairie Dog Town, whose numerous ads announced the presence of a living 5 legged cow. 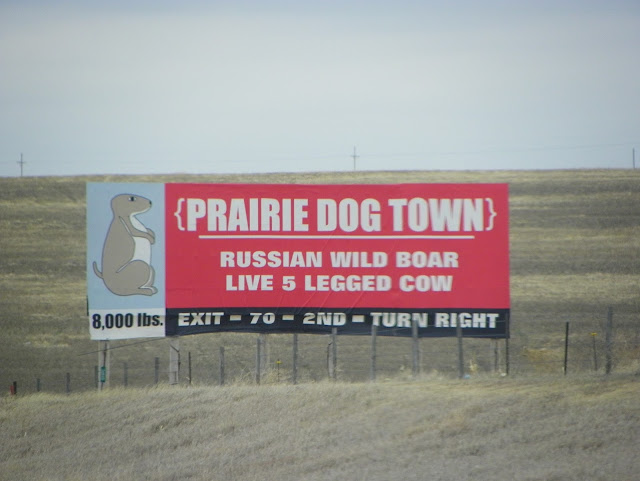 Pulling off the highway and into the tiny town of Oakley we could not miss the huge statue on the only high ground for miles. Riding his favourite horse "Brigham" as he rides down a bison is the bronze statue of Buffalo Bill. This is an unusual statue as walking up the crest of the hill where it stands are numerous information displays and even short radio announcements you can listen to about the Buffalo hunter and the history of the region.

One of the smaller museums I was happy to find while exploring the vast grasslands of the US was The Fick Fossil and History Museum, which Wikipedia states: “is a museum that displays large dinosaur fossils from Kansas, many old tools, mineral specimens, and shell and mineral folk art.” Sadly this is not true, or at least was not an accurate description during my visit. While the museum does display fossils of many prehistoric creatures, nowhere do I recall seeing a dinosaur. 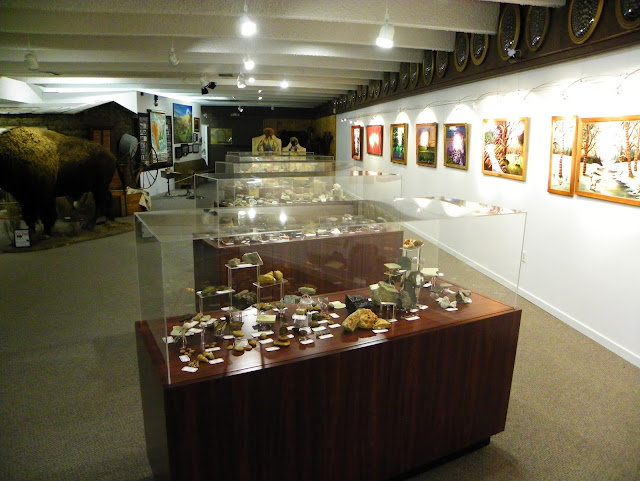 The Fink museum is located in the same building as the local Oakley library, and was built after the town was given an unusual donation by Ernest and Vi Fick in 1972 of a number of fossils and artworks - and strangely a number of artworks containing fossils. 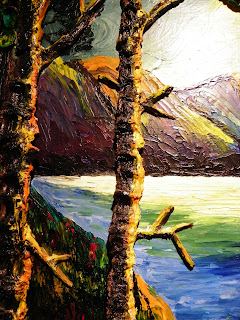 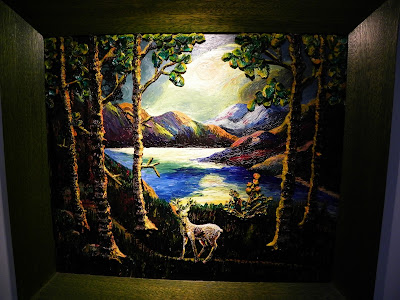 During the Late Cretaceous much of central USA lay under the Western Interior Seaway, which created vast beds of chalk that so many of the world’s most famous marine fossils were discovered lying within. Amongst the fish, turtles, sharks and birds have been found long necked plesiosaurs and numerous complete mosasaurs. 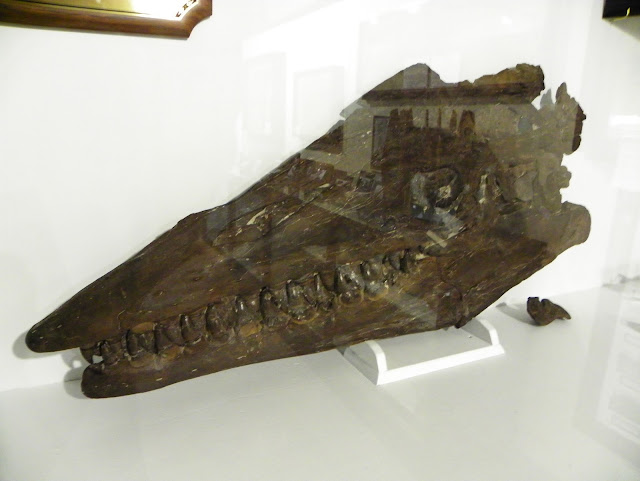 Because so many marine fossils are found around the region, the Ficks collected some of the more common fossils and added them to their artwork. Some of the landscape paintings they created contain hundreds of fossils; and often these make up everything, including the trees my favourite by far is the enormous shark made up from thousands of fossil shark teeth. 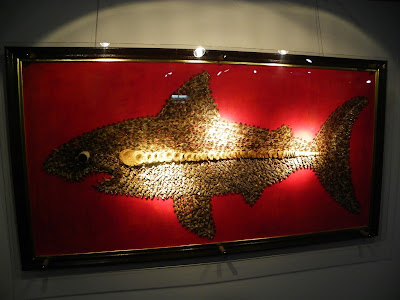 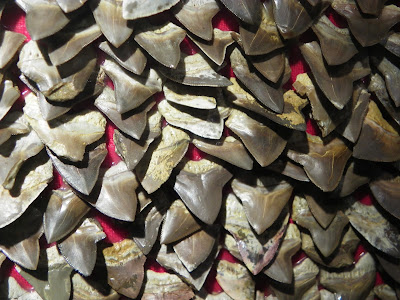 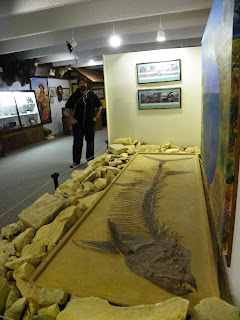 Also on display are is one of the world’s oldest known mosasaur fossils, along with a 15 foot Xiphactinus Audax specimen that had been prepared by well-known Kansas fossil-hunter, George Sternberg.

There are some items of interest not to be missed, including the complete paddle from a Plesiosaur that may contain the evidence for why only the paddle was found. Running across the large bones of the reptiles flipper are a number of large grooves, believed to be from the teeth of an attacking mosasaur. 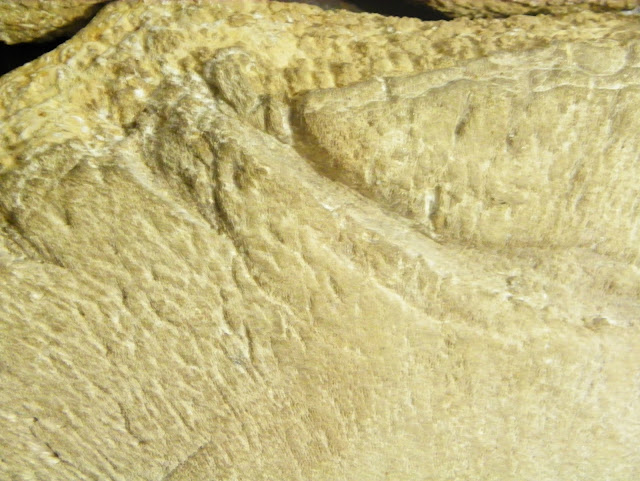 As a local museum, many of the specimens were found and donated by local residents, and the displays often proudly announce who found the item and any story that went along with the fossil and its finder. 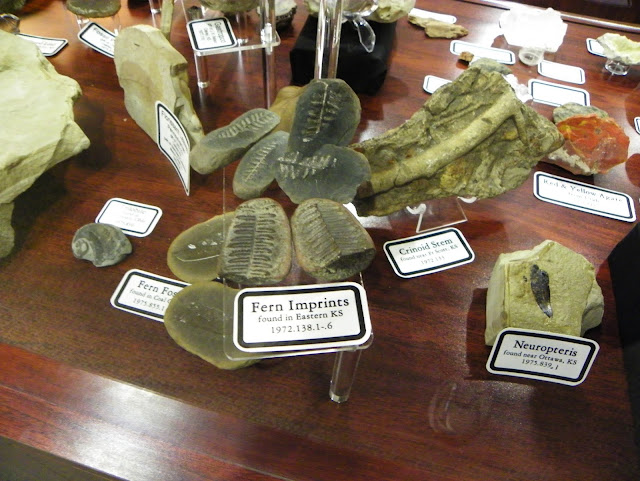 The Discover Oakley website points out it is not only fossils that can be seen at the museum either. The display proudly: “houses replicas of Oakley’s first Depot, a sod house, Prather’s Creamery, and Oakley’s General Store. The museum also houses a large, impressive collection of rocks and minerals from the Oakley area and around the world including the remains of ancient tombs!” 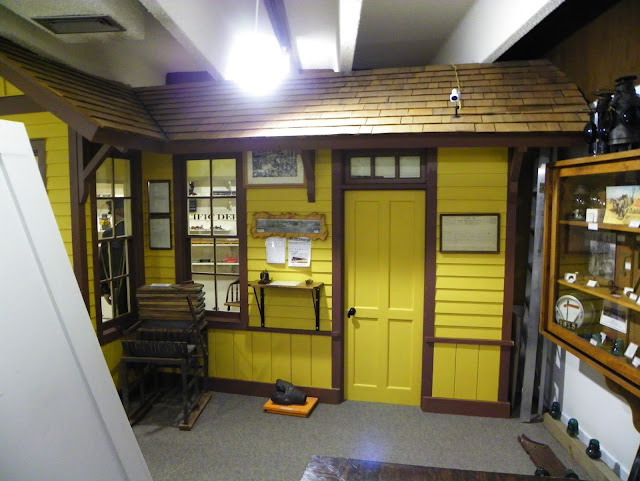 http://www.discoveroakley.com
...by the way, I never did get to see that 5 legged cow!

Entry is free- as for hours, it is likely bet to contact the museum to find out when it is open as it seems to have limited operational hours during winter.
the museum can be found at:
700 W 3rd St, Oakley, KS 67748, United States