The first day of our circumnavigation of the UK led us through Cambridge, and I was keen to stop by and visit the famous university’s natural history museum. 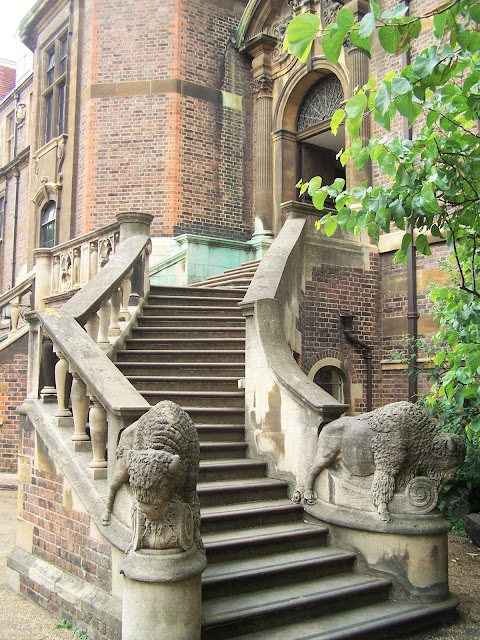 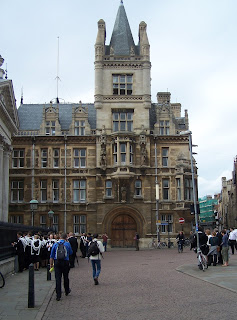 Cambridge is a great walking city, with cobbled streets and lanes packed with spired buildings and wide, green courts lined with ancient trees. These streets were very busy when we arrived and the reason for this became evident when we noticed large numbers of people walking around in gowns - it turns out we were there during graduation. This proved to be good timing for us as we had the run of the museums. 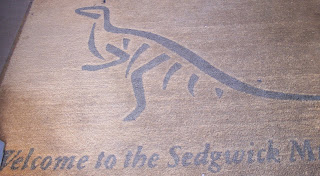 Dr John Woodward was a late 17th and early 18th century scientist who, upon his death, bequeathed his natural history collection and a substantial amount of cash and land to the University of Cambridge. This led to the Woodwardian Professorship of Geology (still a valid chair today) and the Woodwardian museum at Cambridge. Today this museum is part of the larger Sedgwick Museum of Earth Sciences.
This makes Sedgwick one of the world’s oldest museums, with its origins dating back to 1728. 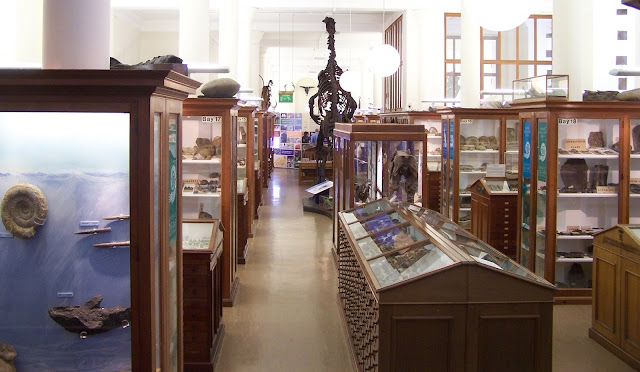 Home to around 2 million geological specimens and fossils, the museum is ‘a major teaching and research resource in the Department of Earth Sciences.’ 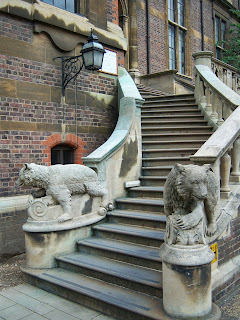 The front door is at the end of a rather grand double staircase, with bison statues on one side and bears on the other. Inside the display is like stepping back in time- in a good way I assure you. Sure there are modern displays of ichthyosaurs, dinosaurs and ancient mammals, not to mention a number of modern dinosaur replicas- such as a copy of the skull from Stan, the T. rex - but these all seem almost secondary to the gems in the old style display cabinets- and when I say old style, I’m not kidding. 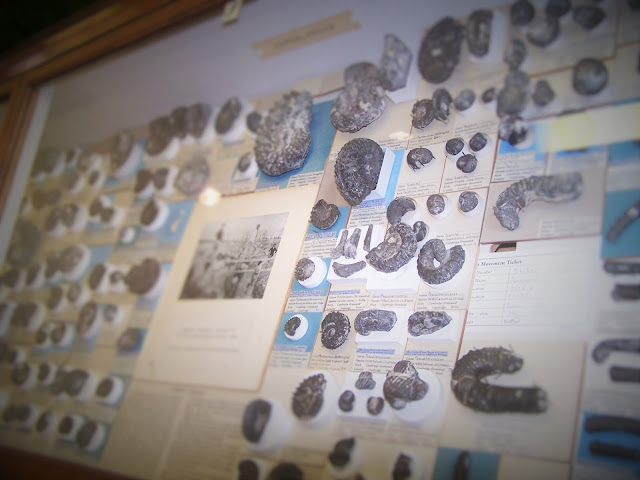 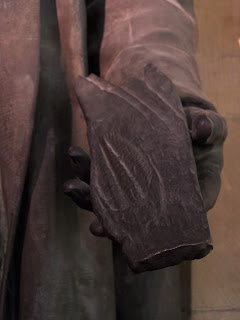 The display is split into two wings, with the Mesozoic fossils on one side and older Palaeozoic fossils on the other. Standing between the two is a life size bronze statue of Adam Sedgwick, one of the fathers of modern geology and the man who first recognised and proposed the Cambrian and Devonian Periods. Highlighting this, the statue holds a geological hammer in one hand, while in the other outstretched hand he holds that universal symbol for fossils everywhere, a trilobite. 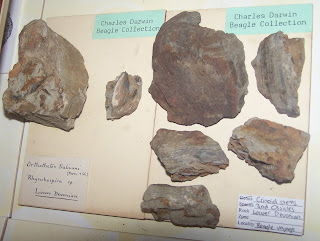 Charles Darwin was Sedgwick’s most famous student, and there is a large display in the museum of the fossils the naturalist brought home from the HMS Beagle voyage. These tiny treasures were given to the museum after Darwin’s death.
This and many other displays are amongst the great enjoyment of this museum to a paleo-nerd. Not only have many items kept their original labels, some now centuries old, but just to read some of the names of those who collected them is a thrill. 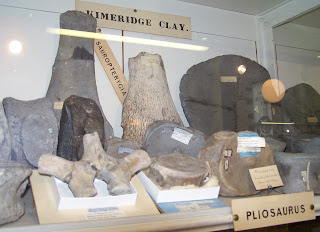 It’s all well and good to read about the great men and women of palaeontology, but to actually see specimens collected by Agassiz, Huxley, Cope, Leidy, Buckland, and the dame of English palaeontology, Mary Anning. 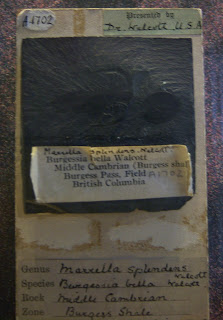 Though there are fossils from all over the world, including some rare Burgess Shale specimens, most of the fossils on display are from regions around the UK. 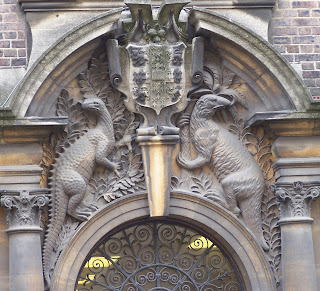 The most iconic of these early dinosaurs was Iguanodon, one of the first found and described, explaining why there is a stone carving of one standing guard over the coat of arms above the front door (the second animal I judge to be a giant sloth). There is also a complete skeleton towering over the front door to the museum.
The Museum’s website takes up the story of its skeleton: ‘we have a letter sent on 26 October 1825 by Dr Gideon Mantell (the discoverer and describer of Iguanodon) to Professor Adam Sedgwick. The letter came with a parcel of specimens, including ... " casts of the best teeth of the Iguanodon in my collection; and of a horn (which you well doubtless remember) which the French [experts] declare is the bony base of a horn of a saurian animal – of course I shall claim it for the Iguanodon." Some of these original specimens are exhibited nearby.’ 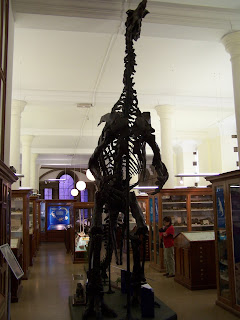 The museums specimen is the cast of Iguanodon bernissartensis, one of the complete individuals found by Louis Dollo, who: ‘described these dinosaur remains in the 1880s and kindly offered to Cambridge (through King Leopold II) a cast of one of the best Bernissart Iguanodon skeletons. The rearing pose of the animal conforms to Dollo’s original conception of the animal, but we now understand (through the work of a former Director of the Sedgwick Museum) that it would have normally walked with a more horizontal pose.’
There are not that many dinosaur skeletons left in the original kangaroo-pose, so for that alone the Iguanodon is worth a look. 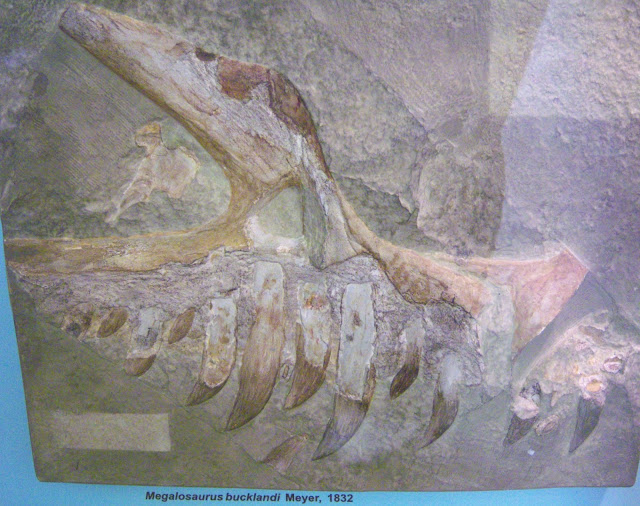 The other species to start the world wide craze for dinosaurs in the 1820's was William Buckland's Megalosaurus and the museum proudly displays a skull fragment of M. bucklandi, a dinosaur that has been recently renamed Duriavenator bucklandi. 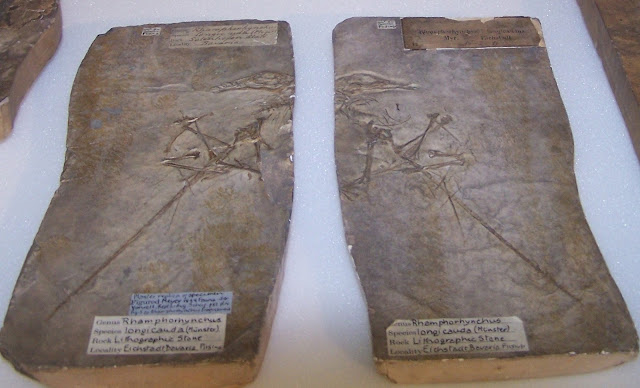 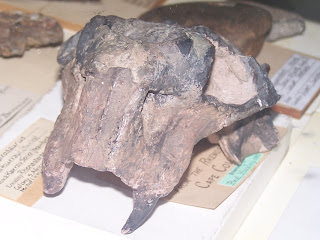 The museum is really like a greatest hits album from the golden age of palaeontology. Row after row, cabinet after cabinet are brimming with fossils from the quarries of Europe. There are German pterosaurs; along with ichthyosaurus and pliosaurs from Whitby, Devonian fish from Canada, ancient stromatolites from Australia and tusked dicynodonts from South Africa- prehistoric remnants from the once global spanning English empire. 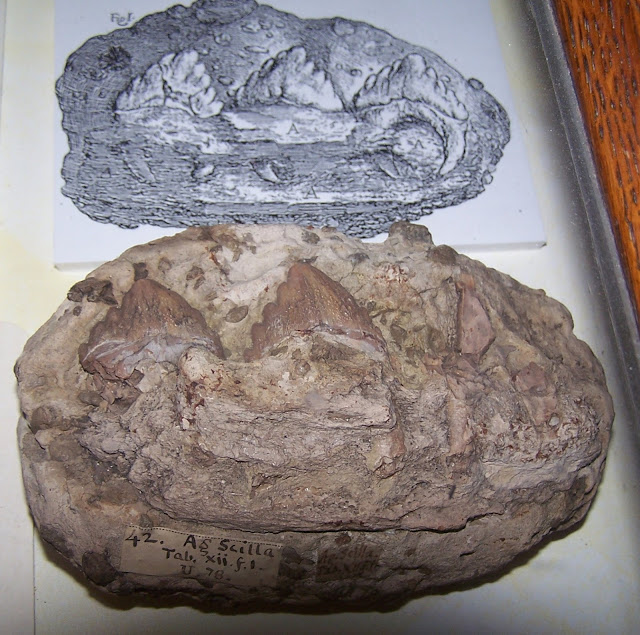 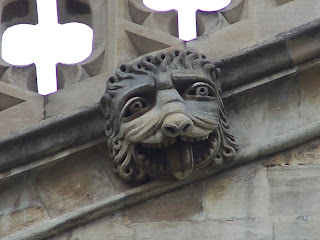 It is also worthwhile taking a walk outside all around the building as there are a number of gargoyles and stone depictions of prehistoric life everywhere. 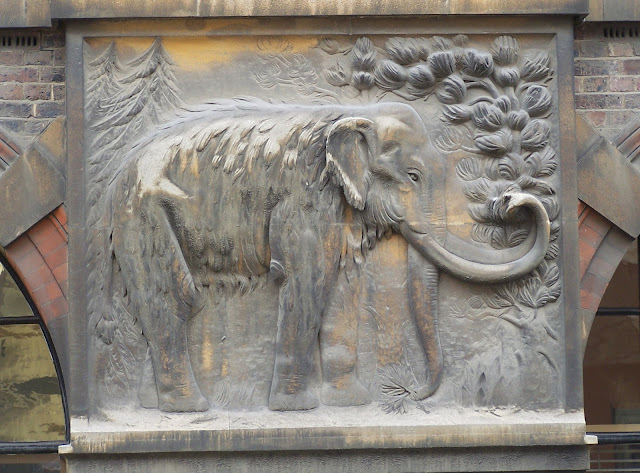 The Sedgwick Museum of Earth Sciences can be found AT University of Cambridge, Downing Street Cambridge. Admission is free, and it is open from 10am to 1pm, then 2pm to 5pm Monday to Friday; and 10am - 4pm on Saturdays. The museum is closed on Sundays and some public holidays so check the museums website for these on:
www.sedgwickmuseum.org