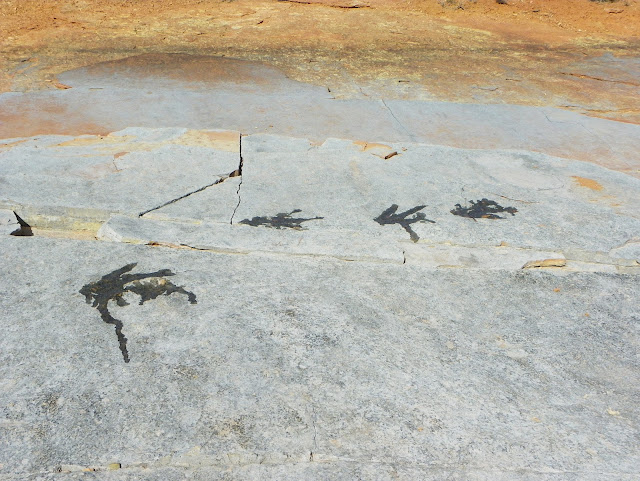 Utah is a great place for dinosaur fans. Not only do you get to drive through a town called Dinosaur that literally has streets named after some of the most iconic species found in the region, you also pass through Vernal- a small town whose main street is literally lined with dinosaur advertising signs right out of the long gone America of the 50s. 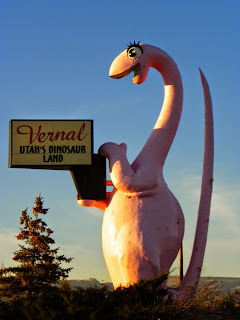 Vernal is also home to the Utah Field House of Natural History, but we shall talk about that later. The road to the National Dinosaur Monument also passes through the town, as well as the road to the Red Fleet State Park and the field of dinosaur footprints it contains. 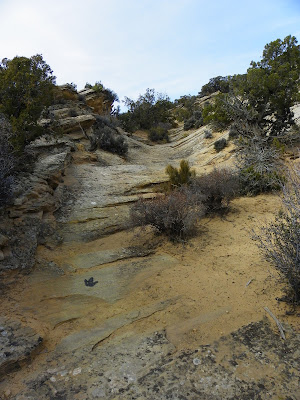 It is only a dozen miles from Vernal, and you drive through some very pretty country, so the trip passes quickly. The car park is well signed, and so is the walking path to the footprints - there are even dinosaur prints painted in certain locations to ensure you cannot get lost.

The walk is great- small ravines of weathered rock past real desert plants, desert cactuses and gnarly, ancient desert trees. There is enough geology to poke a stick at, and signs explaining what you are, or are about to see. 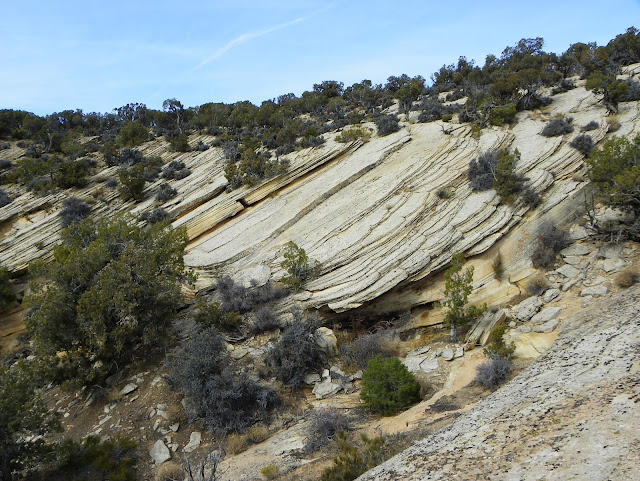 Now I should point out in my current research it seems the fossil footprint location has had an upgrade, with more signage to help you work out what you are seeing. I did not have any trouble finding them at the time, though I had been to similar sites in Arizona, so had a fair idea what I was looking for. 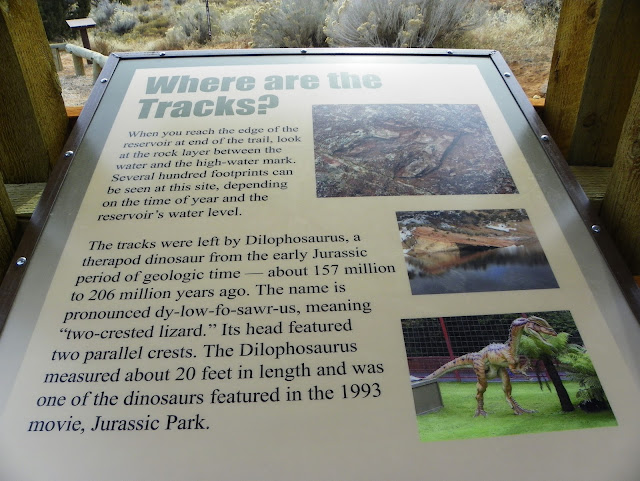 Sadly I had just had a great chat with one of the people working at the nearby natural history museum, who mentioned someone had recently attacked the fossils, and some did indeed seem to be damaged. There are still plenty of great prints, but while I was looking around I could see a small part where someone had indeed been naughty. I even found a single small footprint a little way off the formation, broken away from the main layer of rock, and lying where it seemed to have been dropped. I turned the little fossil over and hid it in a spot, then later contacted the museum and told them where it was so they could go out and save it. 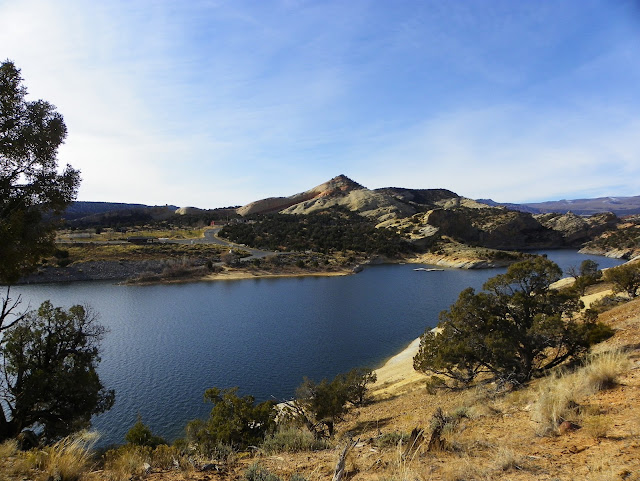 I honestly do not know if that was the right thing to have done, but there was every chance someone was going to carry it away, or it was going to be either lost or destroyed- perhaps both- so I think it was a good thing to do and the museum seemed to appreciate it. 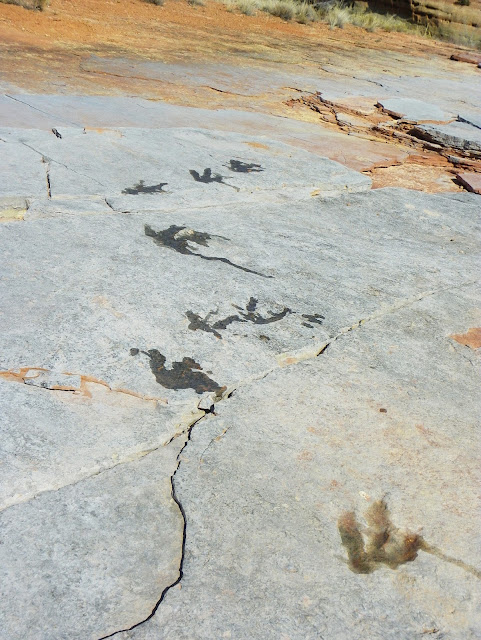 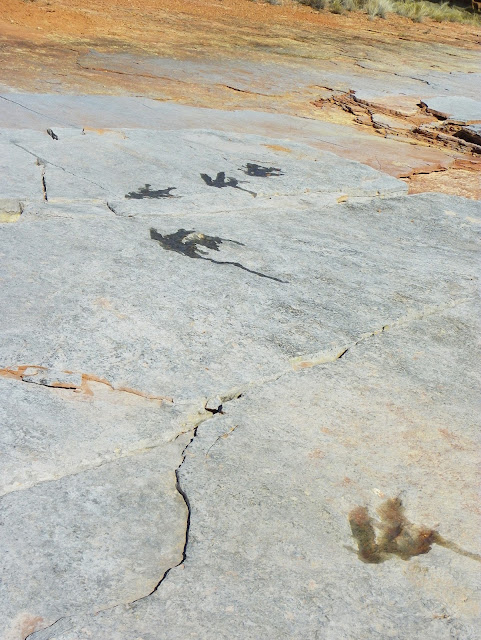 The amount of tracks you can see depends on the season. They lie beside the park’s water reservoir, which rises and falls throughout the year. This of course means when there is more water in the lake, there are less fossils to see, and when the water falls, it exposes more of the track ways. 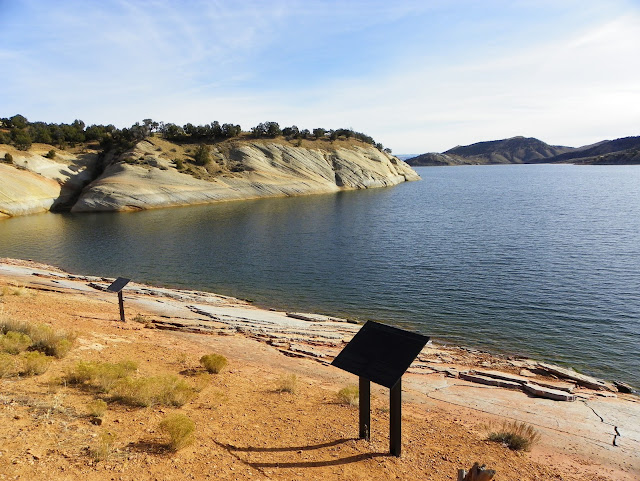 As the footprints are merely impressions in the rock, they are of course the exact same colour as the rock and easily missed. A bit of water and the prints show right up, however, and it’s easy to see long lines of tracks made from a single dinosaur walking along the floodplain that once lay along this part of the state 200 million years ago. 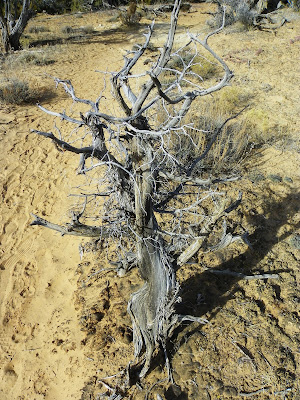 Most of the footprints seem to belong to Dilophosaurus, a large theropod from the Early Jurassic and one of the star critters from Jurassic Park. Remains of the dinosaur have been found across the northern hemisphere, and possibly even in India- meaning they were present on Gondwana as well as Laurasia.
Unusual for a dinosaur species, it would seem Dilophosaurus is known almost equally from footprints as well as fossilised remains, with identical tracks like the ones in Utah being found in Arizona, Sweden, Poland and possibly Massachusetts. 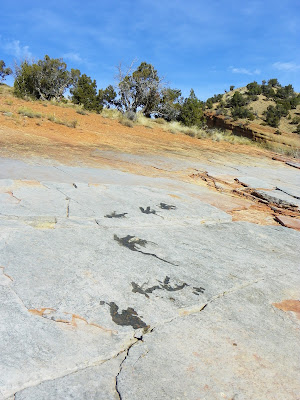 One of these Massachusetts impressions deserves special attention as it seems to show a spot where a Dilophosaurus sat down. There is a clear body print and footprints, and for a while it was thought little grooves around the spot where it had sat were feather impressions. Today it’s believed these were more likely cracks in the drying mud the dinosaur sat in.

Back to Utah. As I said, the Carpark is a good one, with a number of amenities, including toilets, but the important thing to do when you visit is bring water with you. The footprint site is located in a desert, and though the walk is short, during summer it’s going to be hot and if you miss the track, well then, you have just found yourself lost in a desert- not a good thing to do without water. 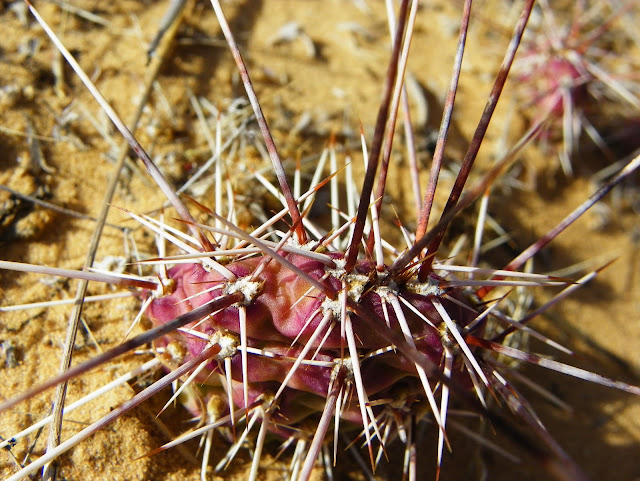