Covering a comic convention might seem like a strange thing to talk about in a blog about natural history, but there are often some surprising things and people to be found at these events.
For example I recently attended the Sydney Supanova convention, held between the 16th and 18th of June, 2016 at Sydney’s Olympic Park.
This is a great location for a convention as it is surrounded by hotels, as well as parking and close to public transport lines. One added bonus, the ANZ stadium was just across the road from the convention and my favourite NRL team, the Parramatta Eels were playing Russel Crowes South Sydney Rabbitohs. Living in Canberra, I never really get to see my Sydney based team play, so this was a treat I was not going to miss out on (we smashed them by the way, 30 to 12).
I only point this out as the Olympic complex is huge, with numerous things going on every weekend. If you do decide to visit the Supanova convention in Sydney, its worthwhile checking out what else is on over the entire weekend. There are concerts and sporting events and numerous other things going on that may well add great value to your trip.

Supanova itself has grown greatly since its beginnings. I used to work in comic shops and ran tables at these early conventions, which at the time were mostly about comics, collectible cards and action figures. Today it is a true media convention, with TV, movies, anime, and of course cosplay becoming a very large part of what’s going on. There was even a wrestling ring in the middle of the convention with wrastlin’ going on throughout the day.


I will admit the line was enormous to get in at the start of the day -but- that line moved incredibly quickly considering the volume of people, and as you are surrounded by hundreds of participants in costume, you will hardly notice the time as you are constantly looking in awe at the effort someone has gone to on their costume. There really were some incredible ones.

As for all things prehistoric, there were a number of comic dealers carrying the various dinosaur comics that have been released over the year, including a great selection of the older adult comic magazines such as Eerie, Creepy and the like. These often carried great stories, drawn by artists such as Corben and Frazetta, and often contain covers of unlucky women having their clothes torn off by some out of control dinosaur. It’s truly unfortunate how often this seems to happen to time traveling ladies.
The reason I was keen for this convention, however, was that one of my favourite comic artists from when I first started collecting comics was going to be doing a signing.
Arthur Adams exploded onto the comic scene with a MARVEL mini-series called ‘Longshot’ in the 1980s, which quickly grew into a fan favourite. He followed this up by a series of iconic images, including one for Wolverine, which soon appeared as a standee in comic shops all over the world.
Adams is a big fan of King Kong and dinosaurs, which explains his own series, ‘Monkeyman and O’Brien’, containing Axwell Tiberius, a 10-foot-tall super-intelligent gorilla-like being from another dimension.
Not only did I get to meet Adams and get him to sign one of my favourite comics he’d drawn, but we had time for a short chat. He mentioned he had seen The Prehistoric Times magazine and was happy to do a future interview for the mag. Me…all I kept thinking was…’Its Arthur Adams, I’m chatting with Arthur Adams’. 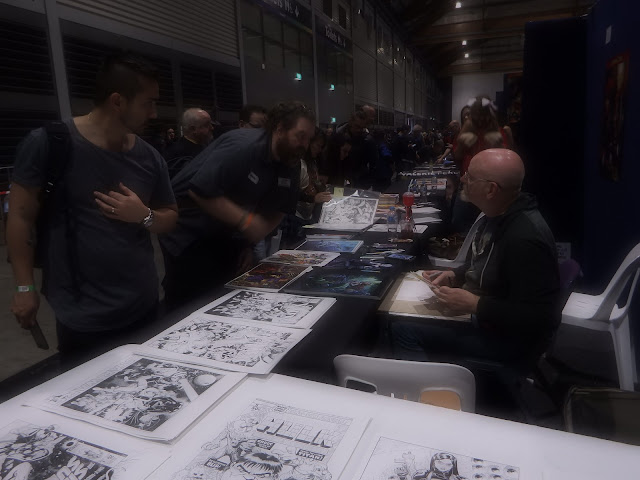 Also at the convention was Frank Cho, an artist that has been making a name for himself lately for his work at MARVEL (especially the Avengers), and comic book covers. For us dino fans, Cho is probably more famous for his newspaper comedy comic strip, Liberty Meadows. This strip often contained story lines with dinosaurs and Kong-like apes….and often both.
I had got to meet Frank at the Baltimore Comic convention, and as his table was busy every time I passed by, I was happy to try and catch him when he had some free time and a moment to chat. Sadly (though not for him I am sure), he was busy whenever I passed, so missed my chance. 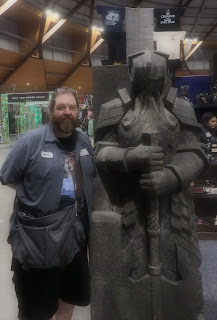 Later in the day things were quieter, and I finally got over to the Weta workshop display, and oh what a display. On either side, enormous carved dwarfs stood towering over everyone, looking as though they had just been ripped right out of the Hobbit set.
Throughout the day various artists from the production company signed the fantastic art books Weta is renowned for releasing from the various films they have been involved with, and I got a chance to chat with Daniel Falconer, a Weta writer and designer.
I was astonished to find out the Weta crew are aware of the Prehistoric Times mag I write for, and we had a great chat about the dinosaurs and other prehistoric critters that appeared in Peter Jackson’s King Kong. Their interest in palaeontology should not be such a surprising as the name ‘Weta’ comes from a family of large, spiny prehistoric crickets that can still be found in New Zealand.
Sadly, Daniel admitted Weta is not working on the upcoming Kong film, which is a shame as the stuff they had produced for the 2005 movie was great stuff. Still, as I mentioned, many of those who work at Weta are dinosaur fans, and we organised to create a questionnaire survey to find out what prehistoric trigger helped guide so many talented artists into the field they have chosen.


These days Supernova is more like San Diego Comic Con than the comic shows it came from, it’s now a pop culture event, drawing fans and professionals from a number of fields. As the conventions are now held in Brisbane, Adelaide, Perth, Melbourne, as well as Sydney, you may want to visit the next one as you just never know who you are going to get to talk to. 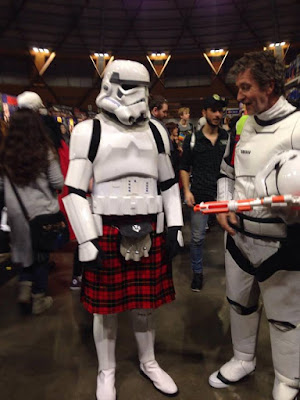 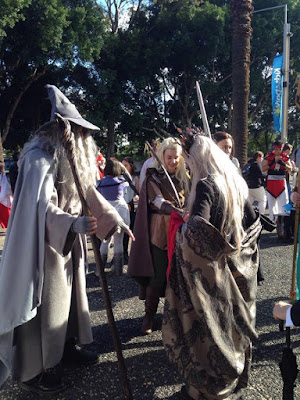