American Museum of Natural History Part One, The Hall of Ornithischian Dinosaurs 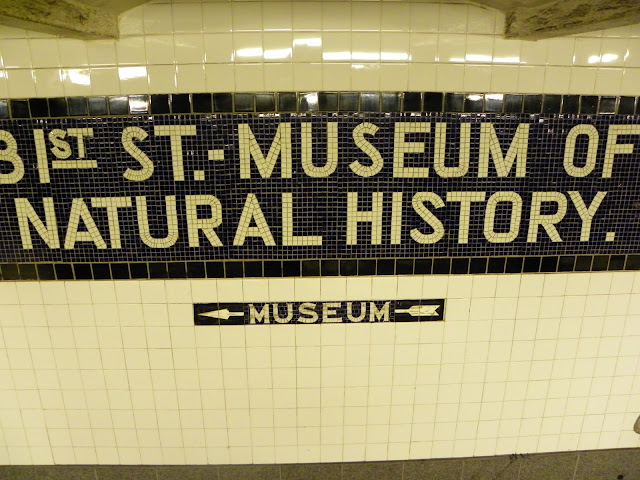 If you’re going to the American Museum of Natural History (AMNH), make sure you go there via the subway, this way you won’t miss the amazing AMNH station, with its fossil strewn walls and murals of living creatures. 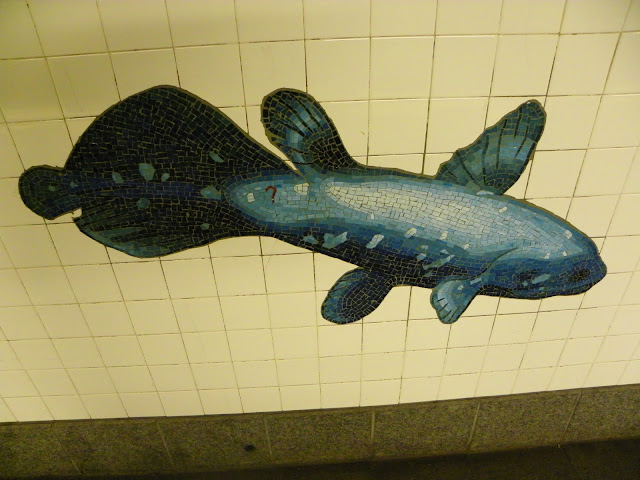 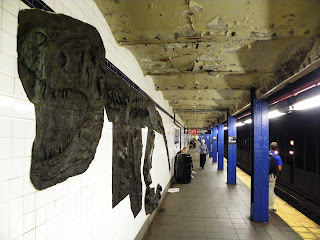 The station is full of artwork, and the stairwell has been designed as though you are descending through geological time the deeper you go (81st street entrance) or diving into the ocean (79th street entrance). It’s a great way to start off your visit. The station also has its own entrance into the museum, helping you miss those nasty summer holiday crowds. 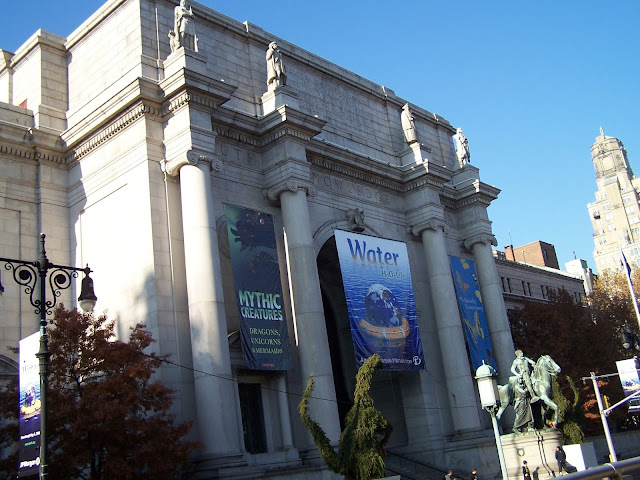 The one problem with this is you won’t walk into the museum through the main foyer, which has to be one of the great thrills of your visit, so another plan might be to enter through the front doors and use the subway entrance to leave. 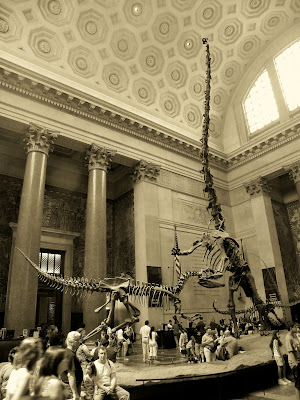 A New York landmark since 1967, the Theodore Roosevelt Rotunda is a massive, cavernous hall that is so large it manages to dwarf the world’s largest freestanding dinosaur exhibit. In the middle of the room is a mother Barosaurus rearing up on her hind legs to defend her baby from an approaching Allosaurus. You can walk around the entirety of this display with its backdrop of the hall and the stunning rosette filled roof. 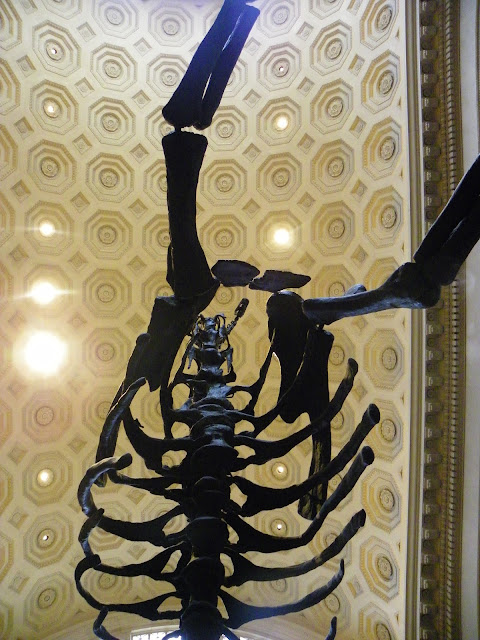 From the rotunda you can pass through a number of doors that will completely change the way you visit the museum, so instead of suggesting a way to go, I’m just going to highlight the displays on each floor of the museum. As this is one of the world’s major displays, I don’t think doing it in one post will do it justice, so it will likely take two or three, with each part focusing on one of the major palaeontology displays. 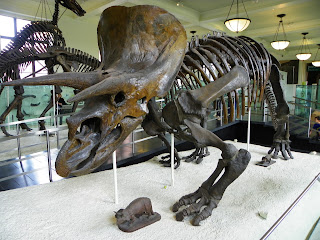 Confusingly called ‘Bird-hipped’ dinosaurs with a pubic bone that points toward the back, the museum has an extensive display of ornithischian dinosaurs here on the 4th floor, including a number of favourites, including an extensive ceratopsian collection, crowned with a complete Triceratops skeleton. 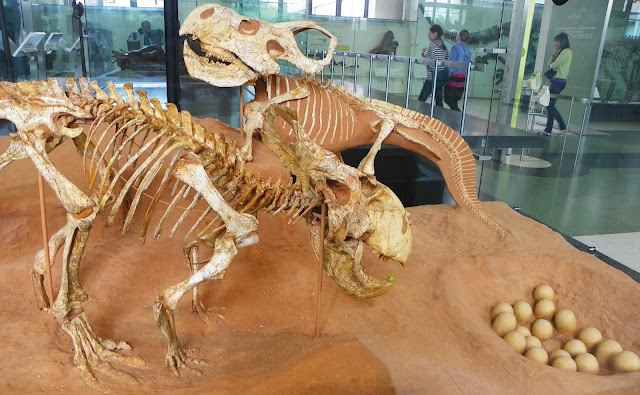 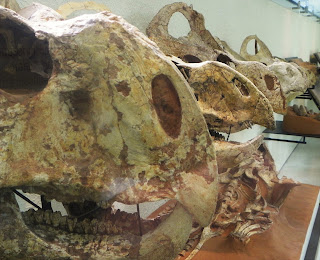 Thanks to the various expeditions the AMNH sponsored, most famously the Mongolian expedition under the command of the original Indiana Jones, Roy Chapman Andrews, there is an amazing display of Protoceratops fossils, including a growth series from in fact to adulthood. The only other similar display to this I have seen is a ceratopsian skull series at the Museum of the Rockies. 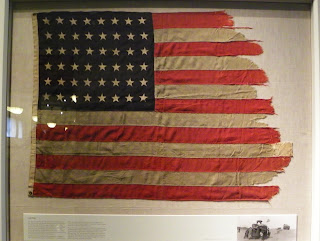 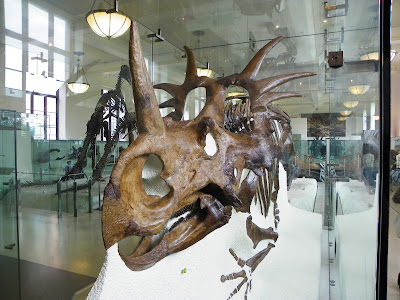 There is (or was at the time) a display about Andrew’s trip into Mongolia just outside the gallery. Along with a number of fascinating articles is the flag that flew above one of the vehicles on displays.


For me it was the Styracosaurus (a childhood favourite) that I found myself gazing at. That skull is astonishing. 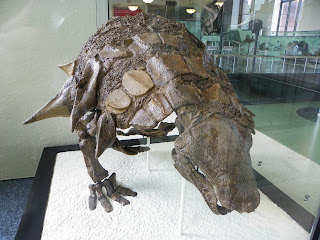 Almost all the ornithischian are represented. There is a very nice Edmontia skeleton, an Ankylosaurus tail club and Sauroplotea armoured body. There is a Pachycephalosaurus, Psittacosaurus and a bipedal Camptosaurus.
The Stegosaurus skeleton is great, but hidden behind glass and highlights one of my great issues with the entire display….glass! There are glass walls and glass panels and glass signs and glass walls and, running along both sides of the room are large glass windows. This means that, at almost every time of the day sunlight is streaming though these windows and it is extremely difficult to get a photo without at least one glass pane reflecting the light filled window.
Though not an issue for the general public, for paleo fans it can become a little annoying when you cannot get a clean picture. 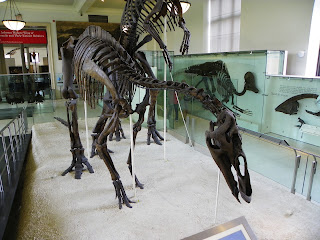 The major component of the display, however, are the numerous hadrosaurs skeletons. Rising to the roof and dominating the room are the two Anatotitan skeletons. Once called Anatosaurus, Diclonius, Claosaurus, Hadrosaurus and Trachodon (to name a few). To be fair, it has been a few years since I have visited the AMNH, so there is every chance these skeletons have gone through another name change to Edmontosaurus.

These two skeletons still hide a secret from the time when these dinosaurs were being fist discovered and mounted in museums. Today we understand that bipedal dinosaurs walked with their tails hanging high, as a counter-balance, but previously it was believed many dinosaurs walked and stood like a kangaroo, with the tail acting as a third leg and resting on the ground. 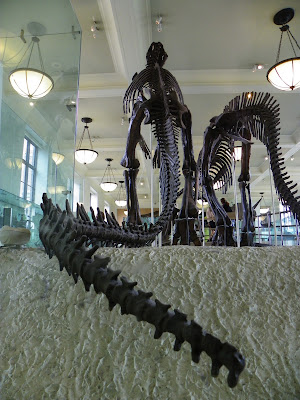 Though many older museums have updated their displays to reflect this, the AMNH hadrosaurs are still standing there the way they always have, with their tails on the ground.

The gem of this hall is the fossil classified as AMNH 5730. This mummified hadrosaur fossil can be found lying just before the Edmontosaurus duo, and was unearthed by fossil hunter Charles Sternberg and his sons in 1908. 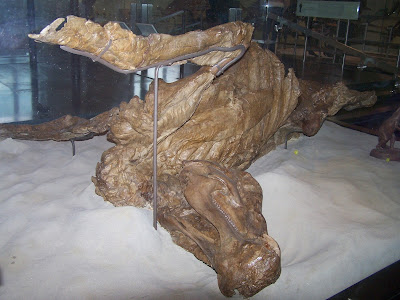 Also on display are skeletons and skulls from many hadrosaurs such as Corythosaurus, Parasaurolophus, and Lambeosaurus.


On the 3rd floor, after several rooms and corridors filled with OK displays, including a large north American Indian display which I personally found a little disappointing (nothing really wrong, it just didn’t ‘grab me’ is all), you will finally snake your way to a room filled with children screaming at ‘DUM DUM!’
I just didn’t have the heart to remind everyone that Dum Dum was the character played by Ben Stiller….not the large monolithic head from Easter Island that sits at the end of this room. 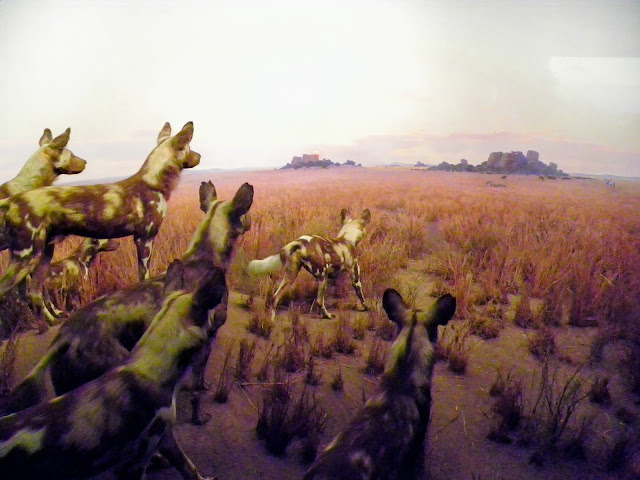 Be warned that many floors actually have upper and lower galleries, and these can be easy to miss. For example the 3rd floor is the only way to into the top level of the African mammal display, which has possibly my favourite exhibit in any museum, the display of African hunting dogs. I will talk more about the numerous life-like displays the museum is famous for later, but this one deserves special attention.
The pack stands on a rise, all looking into the far distance for prey. The way this display is put together you truly feel like you’re peering of into the distant horizon, but remember, the wall is only inches in front of the dog’s noses. It is a fantastic example of false perspective and shows you the skill that goes into these museum displays. 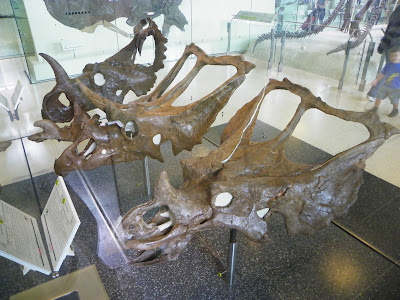